SAP: Cloud Will Drive The Stock Up Over The Long Term (NYSE:SAP)

The coronavirus has caused several companies to emerge as leaders in their respective industries, and SAP (SAP) has ridden the wave of strong cloud performers. The company recently reported Q2 revenue that was slightly above expectations and margin expansion that was also better than expected. The company’s strong cloud and software presence has helped insulate their revenue from material deterioration during these challenging times.

In addition, the company reiterated their 2020 guidance, and while some investors may have looked for a slight guidance raise, given the quarterly earnings beat, I believe management left some conservatism in the guidance. 2023 ambition goals were also reiterated as the company maintains their bullish outlook over the next few years, especially around cloud growth.

Since reporting earnings a few weeks ago, the stock is only down ~3% as investors were likely expecting a little bit more in terms of a guidance raise. Nevertheless, the stock has remained a clear winner over the past year and is up nearly 20% so far this year. Investors who have patiently held on to this stock have been nicely rewarded.

However, with a strong bullish performance also comes higher valuation. While I believe, over the long term, the company’s cloud revenue growth will propel both revenue acceleration and margin expansion, I believe valuation has reached a level where new money should be a little cautious. The stock currently trades at ~28x forward P/E, where, in the past, the stock has tended to trade close to ~24x P/E.

Yes, the higher valuation is somewhat warranted, given the strong operating performance over the past several quarters and bullish outlook. However, investors should be cautious with new money.

During the quarter, overall revenue grew by 1% in both constant currency and in reported terms to €6.74 billion, which was slightly ahead of expectations for ~€6.70 billion. While revenue growth did decelerate from the 5% constant currency growth last quarter, the economic environment was much more difficult in recent months.

Operating margin during the quarter came in at an impressive 29.1%, which was ~180bps higher than the year ago period of 27.3%. The two biggest drivers behind the margin strength during the quarter are cloud and less discretionary spending. Cloud revenue continues to grow at a faster pace than the company’s overall revenue growth. With cloud having higher margins, this means that, over time, margins should expand higher as cloud revenue represents a greater portion of overall revenue. Also, the company spent a lot less on discretionary items, such as travel and entertainment expenses.

With revenue coming in slightly better than expected and margins remaining strong, this led to EPS of €1.17 for the quarter, which was ahead of expectations for €1.14. 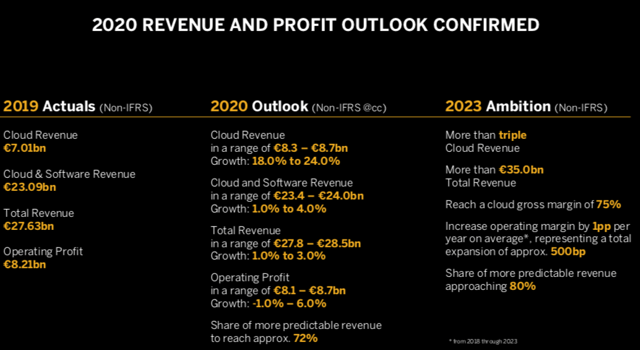 Despite the many uncertainties in the global economic environment, SAP was able to reaffirm their 2020 guidance in addition to their 2023 ambition targets. The strength and resilient nature of cloud revenue was likely one of the main reasons why the company was able to reiterate their previous guidance ranges. With cloud revenue expected to represent ~30% of overall revenue and cloud/software revenue representing nearly 85% of overall revenue, the highly recurring nature makes it easier to predict revenues.

Below is an excerpt I’ve previously discussed concerning the company’s 2023 ambitions:

When looking at the company’s ambitions for 2023, their goal remains to triple their cloud revenue and to reach a cloud gross margin of 75%. Operating margins are expected to expand by 500bps, which equates to ~100bps of margin expansion each year. The transition to more cloud revenue will enhance margins and ultimately profitability and cash flow over the long term.

Management’s plan includes total revenue of over €35 billion with recurring revenue reaching 80%. Given the fact that nothing changed from these plans, this should be viewed as a positive as nothing fundamentally changed with the business or outlook since last quarter.

Even though the company beat quarterly expectations on top of reiterating both their 2020 guidance and 2023 ambition plans, investors seemed to feel only mediocre about the results. Since reporting earnings, the stock has fluctuated up and down, though currently remains down ~3% from pre-earnings levels. However, the stock has been a great pick throughout the global pandemic market shakeup, with the stock up nearly 20% so far this year. I believe investors have realized that SAP can deliver good growth trends, led by strong cloud solutions.

With 2020 guidance being reiterated, I believe this should give investors underlying confidence in the business throughout the remainder of the year. While many investors were likely looking for a raise, this could also mean that guidance for the rest of the year is a little more conservative now than it was just a few weeks ago.

The above peer group has seen their valuation expand quite a big since the late March/early April lows a few months ago. Investors quickly realized that these large-cap software companies have the wherewithal to withstand a significant economic shock without needing to alter their long-term strategy or trajectory.

While the 2020 guidance seems to bake in some level of conservatism, I am more satisfied with the 2023 ambition goals being reiterated. This essentially means that management does not believe the current health pandemic will cause any material changes to the company’s longer-term goals. Cloud revenue will continue to be one of the biggest revenue growth and margin expansion drivers for the company over the next several years, and investors will closely follow any trends in the market.

Nevertheless, while I do like the company a lot over the long term, valuation has reached a level where I would not put new money to work. Though the company’s bullish cloud revenue may signal revenue growth acceleration on top of continued margin expansion, investors need to weigh that against relative valuation.

The stock has been a winner so far this year, and investors should continue to hold onto their positions in their portfolio as this name is a long-term winner. However, investors should use a little more caution if looking to put new money to work, given current valuation has expanded quite a bit over the past several weeks on top of strong cloud trends.

Risks to the company include cloud revenue growth decelerating either due to increased competition or a change in market preference. In addition, if the company is unable to successfully expand their margins over time, investors may punish this stock. Competition could also increase during times of uncertainty, and newer, more specialized technology companies could increase the level of competition.