SAP: A Tech Stock To Diversify Your Tech Stocks (NYSE:SAP)

SAP (SAP) already has offerings that are integral to many companies across the globe. As they push for greater cloud uptake, this will only increase margins and thus profitability. Being a European multinational software firm could mean that it has a better position in regards to the current US and China tech trade issues. But management must prove execution in this ongoing turbulent climate.

SAP has a proven track record spanning decades during which they have developed enterprise software that form the backbone of many firms. These offerings cover database and database management (SAP HANA), Analytics (BusinessObjects BI), Enterprise Resource Planning (S/4HANA), Human Resources (SuccessFactors) and also Procurement (Ariba, Concur). In addition, SAP offers services and support for their portfolio of software and technology. This provides another avenue of revenue.

It’s the biggest company by market cap trading on the German DAX, the largest software company in Europe, and has over 440,000 customers in over 180 countries worldwide.

These are not small sums of investments and market reaction was not always positive on announcement of the news. Also, such regular outlays serve to keep the company in integration mode rather than focusing on improving the current situation. Indeed, it is with this backdrop last year saw the arrival of Elliot Management into SAP. The activist investor revealed in April 2019 that it had taken a 1.2 billion Euro stake in the software giant.

Since then, there have been some notable changes at the firm, including the departures of the CEO, CTO, initiation of a buyback scheme, implementation of a cost-cutting scheme and initiation of a strategic review.

Let’s talk about the cloud, le mot du jour for the market, and for SAP this is no exception. There has been a clear concerted effort over the past few years to increase revenue from the cloud, a reported $70 billion was spent over the last 10 years investing in this transformation. This can be no clearer seen than by the management incentives set for the executive board, including CEO Christian Klein. Initially beginning as co-CEO in October 2019, he has since taken over the single CEO role as of May 2020. Given his short tenure so far in the corner office, any judgment of his performance would be unfair, but what can be clearly identified is the emphasis on increasing cloud revenue.

The headlines of the Q2 2020 quarterly result immediately emphasis the cloud results: 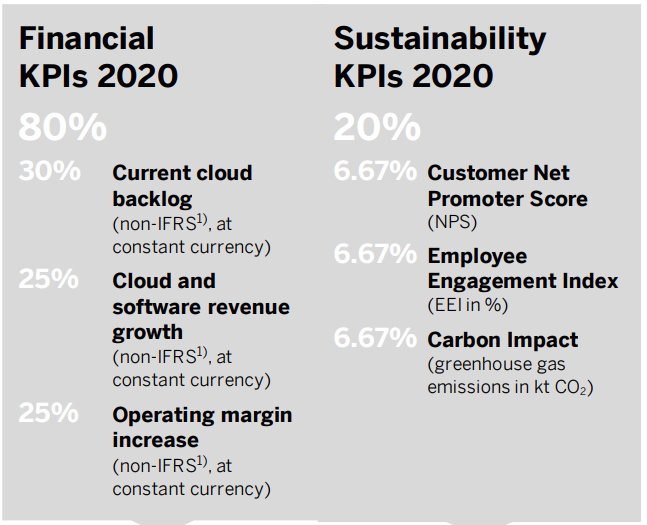 75% of the financial KPI for the executive board is related to improving cloud revenue.

This concerted effort for greater cloud revenue is part of their longer-term aim: 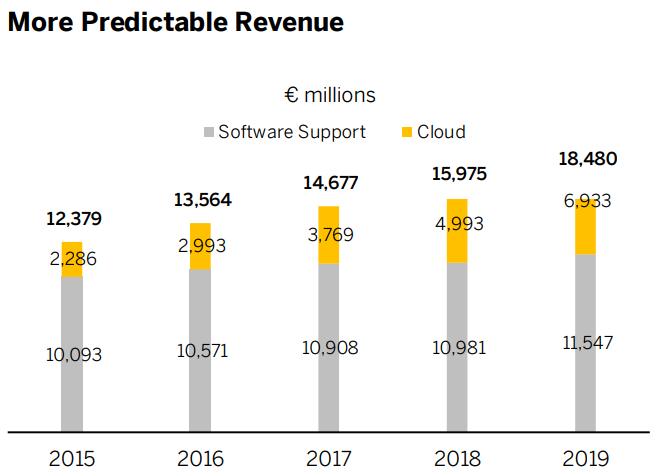 The prediction for 2020 was a more predictable revenue of 70%.

This strategy should provide for a more stable and consistent earnings view which can only be of benefit for the market valuation of the firm given that reoccurring revenue either through subscriptions or, in this case, support contracts removes some investor uncertainty.

It is the aim of the firm to additionally improve cloud gross margins. As mentioned above, the goal is to reach 75% by 2023 and the table below shows the development over the last 5 years:

Overall, we see a firm that has a clear strategic growth focus on cloud and support related revenue. Indeed, the structuring of the executive board incentives and the stated 2023 aims underline the trends started in previous years. Elliott Management is well-known for taking stakes in firms where they believe there is potential for greater returns that should be unlocked by management. In order to achieve this potential, all options are on the table and past deals have often seen changes in the executive board post activist investor stake. This is not necessarily a bad thing, indeed, in this case, it could be said that after years of growth acquisition, a stronger focus on improving margins may well be a better allocation of resources.

Competition is never too far away, and as the recent headline grabbing Snowflake (SNOW) shows, it is not necessarily always existing large cap corporations that may provide this rivalry. However, the current landscape is such that the majority of SAP’s rivals are North American companies. As part of their long-term incentive program, SAP itself lists its peer group as the following: 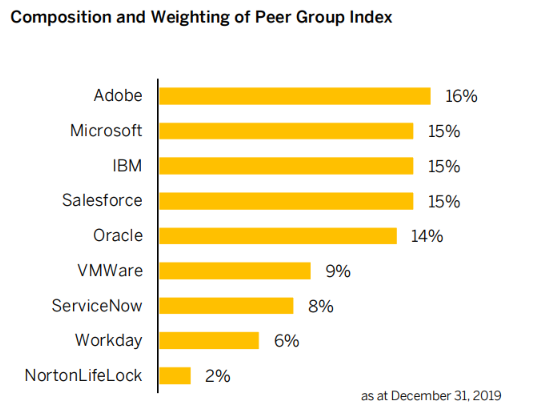 All these listed peer group competitors are American and, as mentioned in the introduction, SAP is the largest European software company. I only mention this given the backdrop of the ongoing US and Chinese trade tensions and the benefits this may endow SAP within this scenario. China is, of course, a huge and growing market which was predicted by the prior CEO Bill McDermott to emerge as the largest market for SAP by 2025. The situation as it is between the world’s two largest economies has seen reports stating that some of SAP’s North American competitors being blocked from dealing with Chinese firms. This includes, for example, Microsoft (MSFT) denied business with Huawei Technologies Co. Ltd. and Cisco Systems Inc. (CSCO) saying Chinese state-owned firms will no longer allow them to bid on contracts because of trade tensions.

Most recently, there has been reporting of a Chinese Blacklist of U.S. companies, although details of exactly which firms are affected are currently unknown.

It’s not all straight-forward for SAP since it may face some restrictions on its products, especially those produced in the United States, but overall, the company has many offerings where these restrictions would not apply. A distinct advantage over its rivals given today’s political setup.

The dividend policy of SAP is to pay a dividend totaling 40% or more of profit after tax.

This has led to increasing payouts each year, shown below: 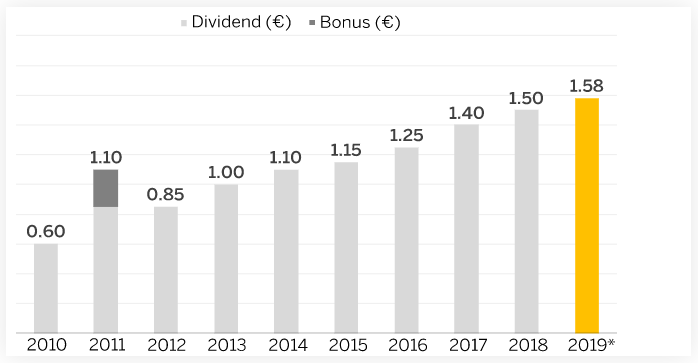 If estimations and the aims of the company’s future plans bear fruit, then one could reasonably expect the payouts to steadily increase in future too.

The dividend yield over the years does not give much to write home about:

But as mentioned, expectations of a reliable, consistent and increasing payouts should mean that any investment in the firm today would naturally lead to increased yield in the future.

Like a lot of known tech companies, SAP’s stock price has shown solid growth over the past few years. Over the last 5 years, the stock price has had an impressive 140% improvement. However, when we compare the stock price development versus the highest-weighted named peers of SAP (Adobe (NASDAQ:ADBE), Microsoft, IBM (NYSE:IBM), Salesforce (NYSE:CRM) and Oracle (NYSE:ORCL)), then we see that SAP has only outperformed IBM and Oracle: 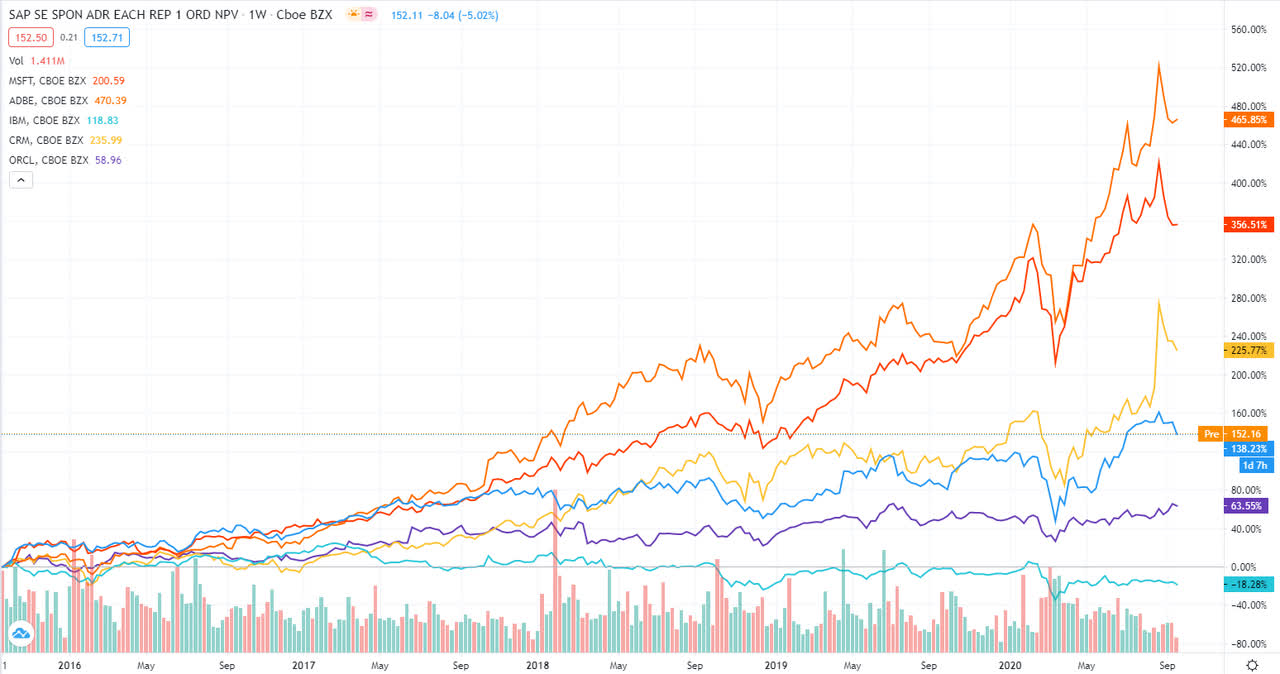 The TTM P/E ratio of SAP currently stands at 36. Concentrating on the better performers from above (Microsoft, Adobe and Salesforce), we see that Microsoft also has a TTM P/E of 35, Adobe has 59 and Salesforce of 92.

It should be noted that neither Adobe nor Salesforce pay a dividend.

Looking at the historical P/E valuation of SAP, we see the following: 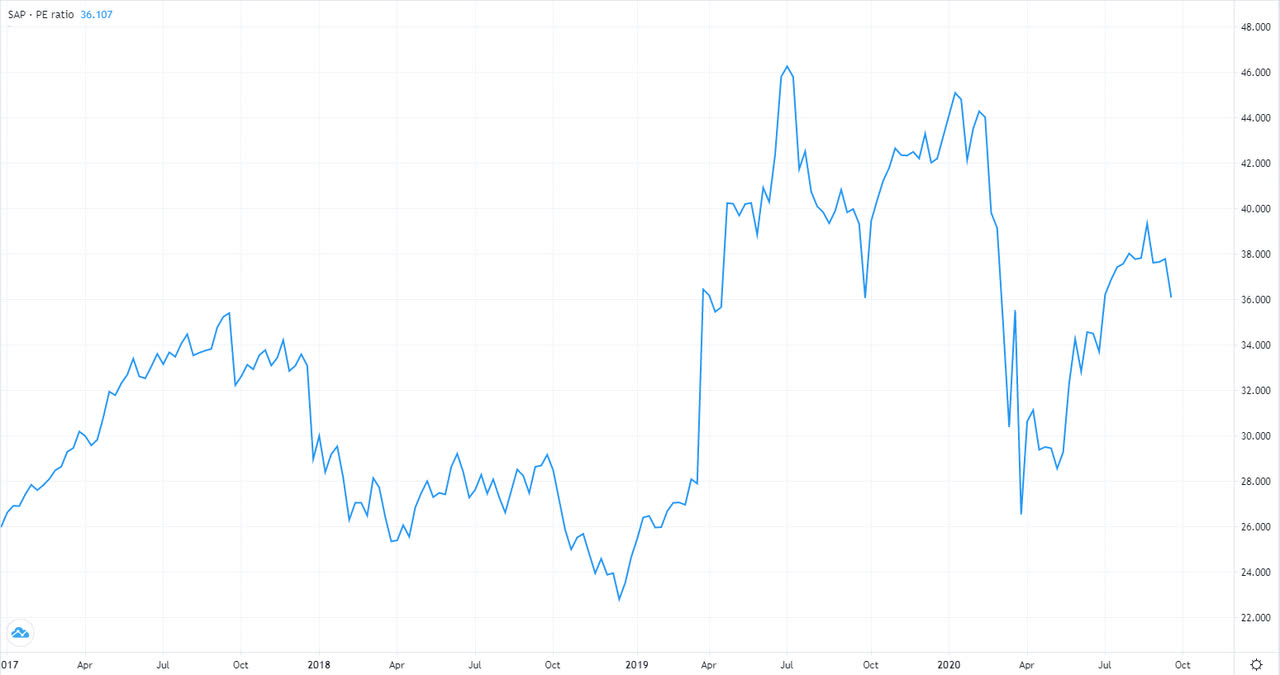 Looking historically, we see that SAP has a 5-year P/E high of just over 46 and a low of 23. Its current valuation puts it exactly in the middle of these two points.

Without going into in-depth comparisons, at current prices, it’s hard to argue why one should favour SAP over, say a Microsoft, when both show comparable P/E valuations at the moment.

However, SAP has certain things going for it such as its growth in the cloud which is set to continue and should be coupled with improving margins. Its positioning as a non-American tech company may prove advantageous with the current trade tension climate which we now see spilling over into the usage of specific apps. It has a consistent and growing dividend payout which should also not be sniffed at.

When viewed against its historical valuation, its current pricing is not by any means cheap, but this is a company to keep an eye on, and if valuations become more tempting, then this is a stock that could provide tech diversification away from the mainly US companies and still deliver decent future growth.

Disclosure: I am/we are long MSFT. I wrote this article myself, and it expresses my own opinions. I am not receiving compensation for it (other than from Seeking Alpha). I have no business relationship with any company whose stock is mentioned in this article.

Previous PostN.Korea says Seoul must stop ‘intrusion’ under pretext of searching for body of slain official, warns of ‘another awful incident’Next PostWeibo woes – Can Weibo do better than Twitter? | Business