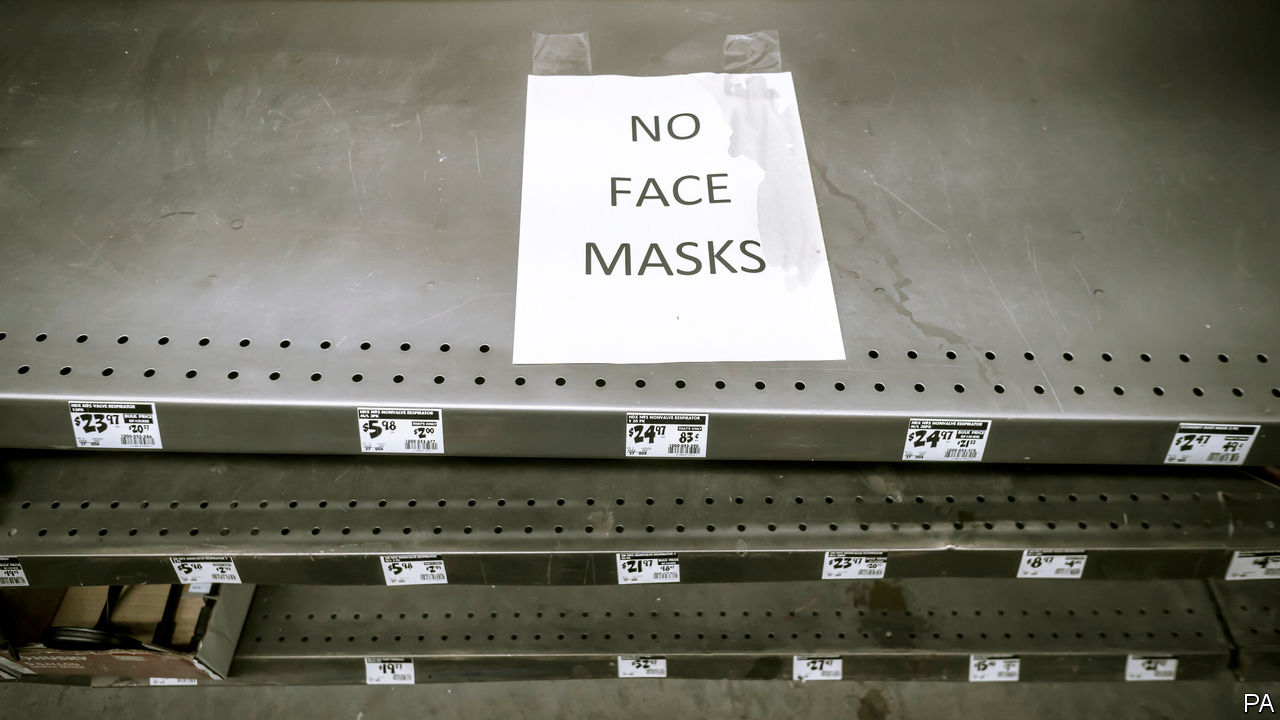 IT IS BAD enough when individuals stockpile pasta and toilet paper. It is worse when governments put a protective ring around medical equipment. As the covid-19 pandemic leads to a rush for medical gear, the World Health Organisation (WHO) has warned that supplies of respirators and medical masks will not keep up with demand, and soon global stocks of gowns and goggles will be insufficient too. Some governments are erecting trade barriers to safeguard their supplies. According to a new report from Global Trade Alert, a trade-policy monitoring service at the University of St Gallen in Switzerland, by March 11th 24 countries had restricted exports of medical equipment, medicines or their ingredients.

The stockpiling started early. The Chinese government bought up masks produced in the country as the virus raged, leaving foreigners with unfulfilled orders. On March 3rd France’s president, Emmanuel Macron, announced that the state would seize all masks, restricting sales abroad. German companies need their government’s approval to export respirators, even within the European Union. South Korea has banned the export of masks and of materials used to make respirators. Countries with few coronavirus sufferers so far, including Russia (20 cases by March 11th), Bulgaria (six) and Morocco (five), are applying restrictions too.

The urge to ensure citizens have what they need is understandable. It also makes sense to give priority to health-care workers who are tending to the sick. It is possible that a completely free market will not do the trick. Jens Spahn, Germany’s health minister, told a meeting of his EU colleagues on March 6th that supplies were not going to where they were most urgently needed, but to where people were paying the most.

The trade barriers pose serious risks, however. The first is that stockpiles in one place can stop supplies getting to others. Jennifer Ehrlich of 3M, a diversified conglomerate that is one of the biggest manufacturers of respirators, says that the company has increased production to meet higher demand. However, because manufacturing is regionalised, trade restrictions stop supplies getting swiftly to where they are most needed.

The second is that export limits “dilute incentives to ramp up output,” says Simon Evenett of the University of St Gallen. This could exacerbate global shortages. He suggests that if governments simply offer to pay more, rather than erecting barriers, they will secure the supplies they need.

A third risk is that trade restrictions start a vicious cycle and generate pressure for even more of them. When developing countries used export restrictions to cope with high food prices in the late 2000s, there was a cascading effect, as other governments responded with supply restrictions of their own, further fracturing markets. According to Global Trade Alert, export curbs have accelerated as the coronavirus has spread. The most recent came from Ukraine on March 11th “to prohibit export of anti-epidemic goods” until June 1st. More countries are reportedly considering controls.

Despite calls from the WHO for countries to work together to ease the problem, this is proving difficult even within a close-knit trading bloc like the EU. If there is so little solidarity now, what will happen when poorer countries with weaker health-care systems are hit? Beggar-thy-neighbour trade policies never end well.