Sandstorm Gold (NYSE:SAND) reported its Q3 2020 financial results. The gold equivalent sales volumes recovered slightly, which, together with improved gold prices, helped to reach notably better revenues and cash flows than in Q2. However, the coronavirus-related issues keep on weighing on Sandstorm heavily and sales are significantly below the pre-crisis levels. This is reflected also by the share price that is close to its late 2019/early 2020 levels, although the gold price is much higher now.

In Q3, Sandstorm’s gold equivalent sales amounted to 12,068 toz. Although it represents a 10.5% improvement compared to the previous quarter, it is 30% below the levels reached during the same period of 2019. 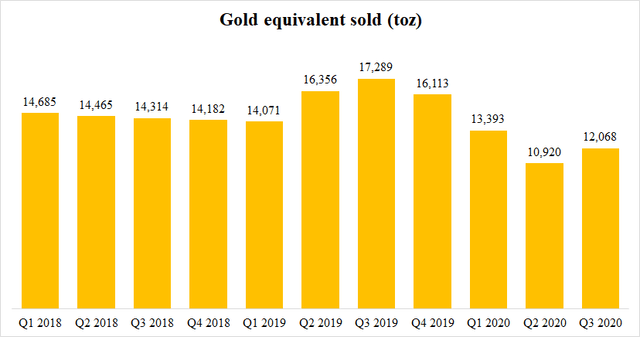 A major negative difference between Q3 2019 and Q3 2020 production volumes can be seen in the case of the Yamana silver stream (48% decline), Santa Elena mine (40% decline), Chapada mine (28% decline), and Diavik mine (61% decline). Also the revenues from the Bachelor Lake mine declined notably because as of the end of 2019, Sandstorm stopped receiving fixed deliveries and its interests were transformed into a 3.9% NSR royalty. However, there are also some positive developments like the Fruta del Norte or Relief Canyon mines that helped to compensate for a part of the abovementioned production declines. 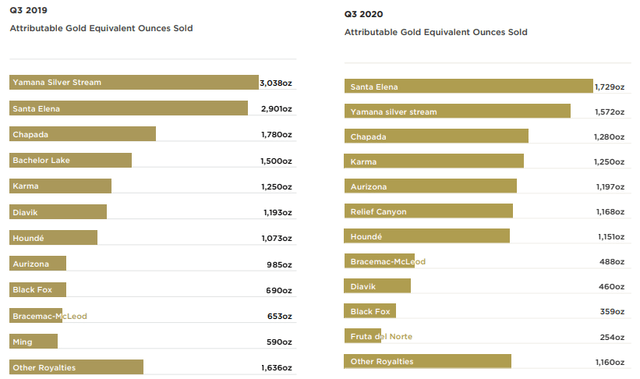 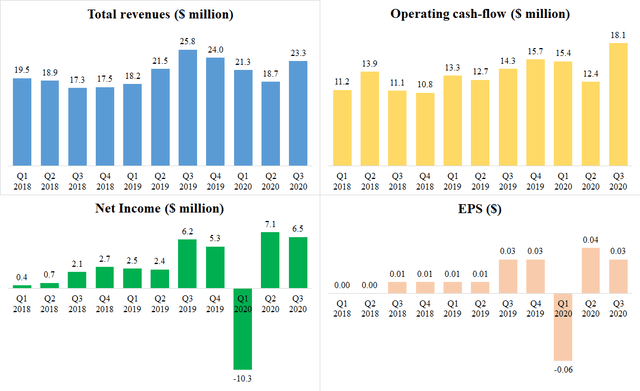 Sandstorm’s cash position improved notably in Q3. It increased by 70% to $75.3 million. The volume of debt remained almost unchanged at $3.6 million. As a result, Sandstorm’s net debt improved to negative $71.7 million. It means that the company is in a very good financial condition and it can afford to make some new acquisitions or to increase the dividends payments easily.

As Sandstorm Gold’s share price weakened, while the financial results improved, the valuation metrics presented in the chart below (on a TTM basis) decreased. The P/E ratio declined to 189.5, the price-to-operating cash flow declined to 23.52, and the price-to-revenue ratio declined to 16.59. All the values are pretty high; however, this is a standard in the precious metals royalty and streaming industry. Moreover, Sandstorm has a major ace up its sleeve. Its name is Hod Maden. After the mine gets into production, Sandstorm’s cash flows will more than double. 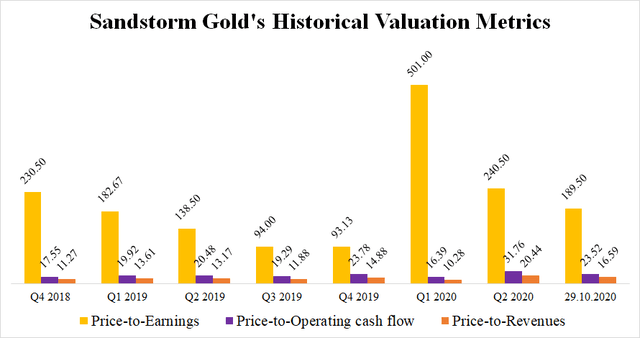 Sandstorm Gold experienced several important developments in Q3. First of all, the permitting process and the works on the feasibility study for the Hod Maden project (Sandstorm owns a 30% net profit interest and 2% NSR royalty) keep on progressing well. The final EIA, as well as the feasibility study, should be completed in Q1 2021, with the first production expected in Q4 2023.

Lundin Gold (OTCPK:FTMNF) is evaluating options for expansion of its Fruta del Norte mine, where Sandstorm holds a 0.9% NSR royalty on precious metals. The results of the expansion study are expected by the end of this year, with implementation projected for Q1 2021.

But there is also some negative news. At Lundin Mining’s (OTCPK:LUNMF) Chapada mine, SAG and ball mill motors experienced significant damages. As a result, the production will be heavily impacted for at least two months. Sandstorm owns a 4.2% copper and 52% silver stream from Chapada. 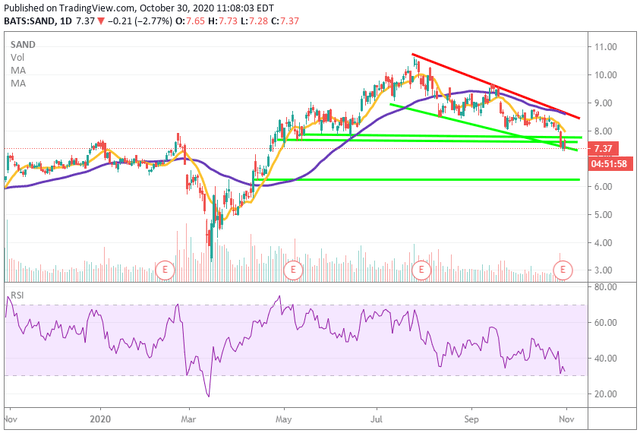 For the whole Q3, Sandstorm’s shares were trading in a descending channel. At present, they are breaking out of this channel, but unfortunately to the downside. The RSI is approaching the oversold levels, but it is not quite there yet, which means that there is room for further declines. The share price is below its 10-day and 50-day moving average; moreover, the 10-day moving average is below the 50-day one and the gap between them keeps on increasing. Not only the descending channel but also the support in the $7.5-8 area was broken in recent days. The next support should be found in the $6.25 area. If the current gold and stock market weakness prevails, Sandstorm may get there quite quickly.

Disclosure: I/we have no positions in any stocks mentioned, but may initiate a long position in SAND over the next 72 hours. I wrote this article myself, and it expresses my own opinions. I am not receiving compensation for it (other than from Seeking Alpha). I have no business relationship with any company whose stock is mentioned in this article.