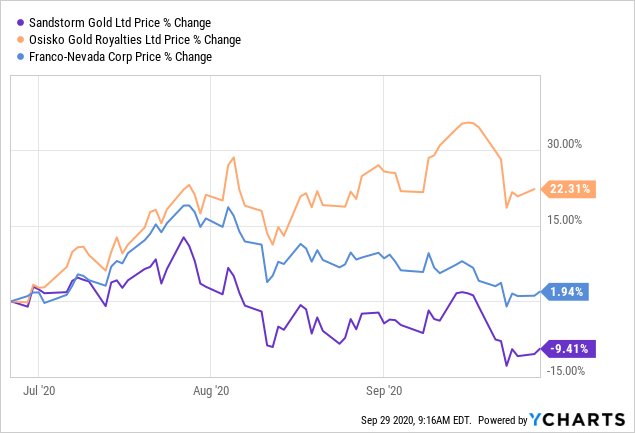 Sandstorm Gold (SAND) shares have declined by 9.41% over the past three months after the company reported weak Q2 2020 financial results. On August 5, I said its shares would likely continue underperforming due to the weak quarter and a lack of positive catalysts.

Well, the shares are likely to continue underperforming, even with gold prices rising this week. On September 27, Sandstorm Gold’s mining partner, Lundin Mining (LUNMF), reported significant damage to its Chapada mill during a power outage.

Sandstorm owns a 4.2% copper stream and a 52% silver stream on Chapada, an open-pit copper and gold mine in Brazil. Yamana Gold (AUY) sold this asset to Lundin back in July 2019 for $1 billion; Sandstorm purchased its Chapada streams, plus a stream on the Cerro Moro project, from Yamana Gold for $152 million in 2015.

According to Lundin Mining, the protection system at the Chapada mine’s main electrical substation failed, resulting in significant damage to all four SAG and ball mill motors. It says the motors will need to be removed from the site and undergo extensive repair. 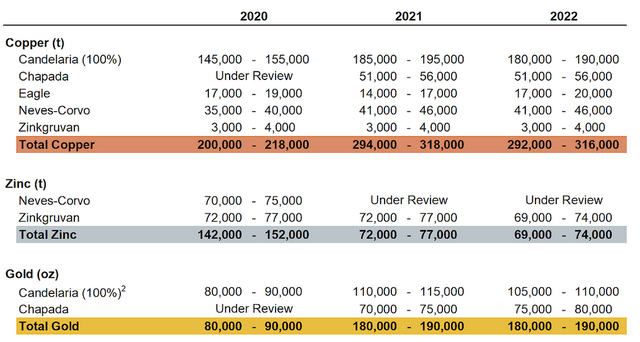 Lundin has withdrawn full-year 2020 production, cash cost and capital expenditure guidance for Chapada, and will undergo a staged resumption of processing. For 2021, the mine is estimated to produce between 51,000-56,000 tons of copper and 70,000-75,000 ounces of gold.

To be clear, Sandstorm is not responsible for any of the costs of the repairs, as it just owns a stream on the production. But this may have a negative impact on the company’s Q3 earnings report, and potentially Q4 if the mills can’t be fixed in a timely manner.

According to a RBC Capital Markets release, the potential terms include an upfront payment of $1 billion, split 55/45 between Royal Gold and Sandstorm ($550/$450 million), in exchange for 21.5% of the silver produced at several mines until 85 million silver ounces are delivered, and then 10% for the remaining life of mine. Ongoing payments would be made at 20% of the spot silver price, with an additional 30% payment for silver above $35/oz.

Responses from readers on social media, and on my recent Seeking Alpha blog post, have been mixed. Sandstorm ended last quarter with less than $400 million total available capital, so it would need to fund a large portion of this stream through its at-the-market equity program.

According to its Q2 financial news release, the ATM program allows the company to issue up to $140 million worth of common shares. With the stock price underperforming peers lately, this is not the ideal time to be issuing new stock.

Another issue brought up by some readers is the mining jurisdiction of India, which is considered a higher-risk jurisdiction (it was not included in the 2019 Fraser Institute’s Annual Survey of Mining Companies due to a lack of industry responses). While India has proposed an overhaul of the mining sector, it isn’t considered a great place to invest such a large sum of money when compared to top mining jurisdictions such as the U.S., Canada and Australia.

Sandstorm’s valuation is becoming more attractive here following the latest pullback, but I’d be interested in the stock if the valuation falls below 9X-10X its projected 2023 post-tax cash flow. While the Chapada issue hurts, it’s likely a short-term issue that will be fixed, and it shouldn’t impact Chapada’s long-term production. 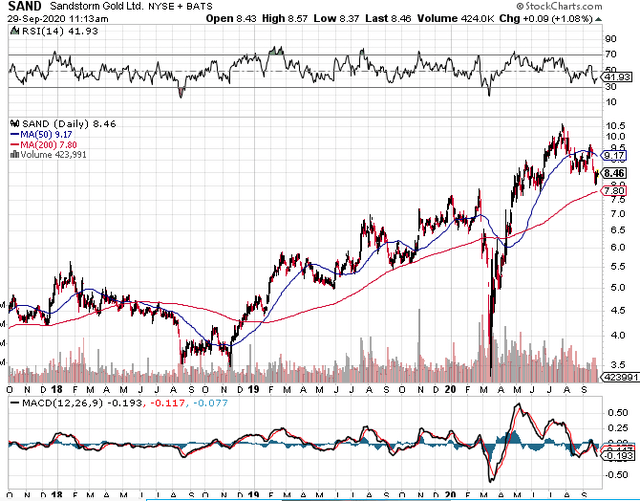 I’d be interested in Sandstorm stock below $8 per share and its 200-day moving average, but for now, I view a few of Sandstorm’s peers as better investment opportunities.