Independent Vermont Sen. Bernie Sanders unveiled his proposal for a wealth tax on Tuesday – which is particularly potent when compared to the plans of others in the party – as support for the tax gains momentum.

Sanders, who dubbed his tax “extreme,” appears to have even out-done 2020 rival Massachusetts Sen. Elizabeth Warren, who unveiled a wealth tax in January.

“Senator Warren also has been actively campaigning on implementing a wealth tax if elected, but the timeframe and revenue projections for Sanders’ proposal appear to be much more aggressive,” Geoffrey Weinstein, special counsel in the Tax, Trusts & Estates Department of Cole Schotz, told FOX Business.

As opposed to taxes levied on income and payrolls, a wealth tax would target the value of accumulated assets owned by rich Americans – or their net worth.

Here’s a look at the differences between the two plans:

Sen. Warren has said her tax would be on “ultra-millionaires,” starting for those with more than $50 million in assets.

Sanders’ tax would kick in for married couples with $32 million in assets – or individuals with $16 million.

Warren’s wealth tax begins at a rate of 2 percent, climbing to 3 percent on households with more than $1 billion in assets.

Sanders’ tax starts at 1 percent, but is much more progressive.

How many people affected?

About 180,000 households would be subject to Sanders’ wealth tax. 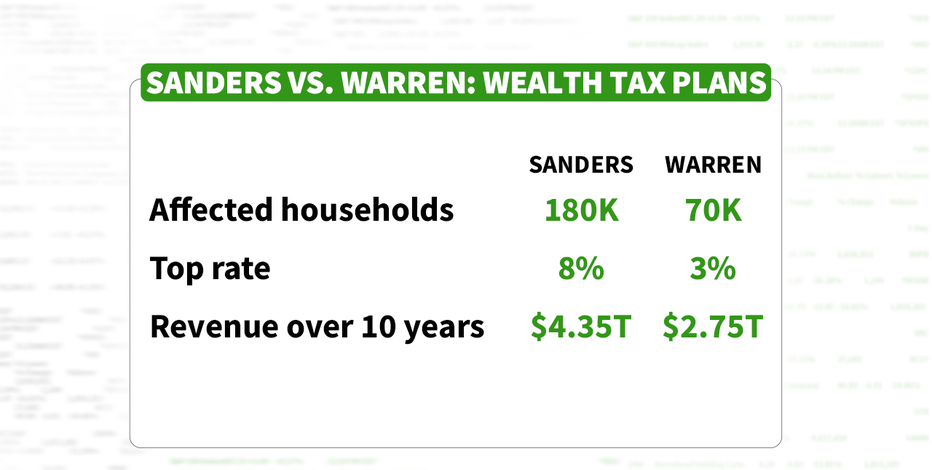 Warren expects her proposal would generate $2.75 trillion over the course of a decade.

Sanders’ estimates his would raise $4.35 trillion over the same amount of time.

Warren calls for a 40 percent exit tax, a significant increase in the IRS enforcement budget and a minimum audit rate for taxpayers subject to her tax.

Sanders calls for the creation of a “national wealth registry,” as well as significant additional third party reporting requirements and necessitates that the IRS step up audits. The audit rate would be 100 percent for billionaires and 30 percent for wealth tax returns of the top 1 percent. There would also be a 40 percent to 60 percent exit tax.