Sand In My Shoes – September Update

The markets took a breather in September with the S&P 500 having its first down month since March. Fixed income investments also sold off slightly with the US Aggregate Bond index falling 0.3% in September. All of this led to this portfolio being off 1.8%. I’d prefer to not have down months, but as far as they go this one is acceptable, especially for 2020.

Did anyone else save their coins, count them, roll them, and take them to the bank to deposit in their youth? I used to love to do that. 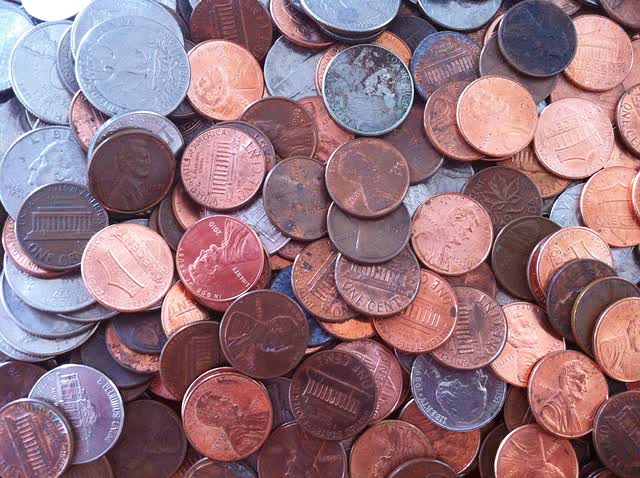 I guess I’m still doing that in some way, only I’m now counting my dividends and I’m using a spreadsheet to do so. The numbers are a lot bigger too. September was a new record for this portfolio in terms of dividends collected topping the previous record by almost $20. I mean, that was two rolls of quarters back in the day.

So let’s start as we always do with the dividend report. 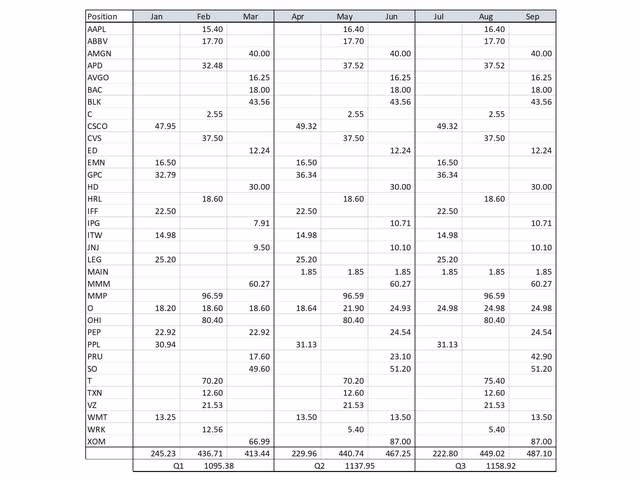 All graphs and charts created by author unless otherwise specified

Dividends collected in September totaled $487.10 with the quarter finishing at $1,158.92. Nearly the entire increase over the June total was due to my purchase of more shares of Prudential Financial Inc (PRU) in late June and early July. 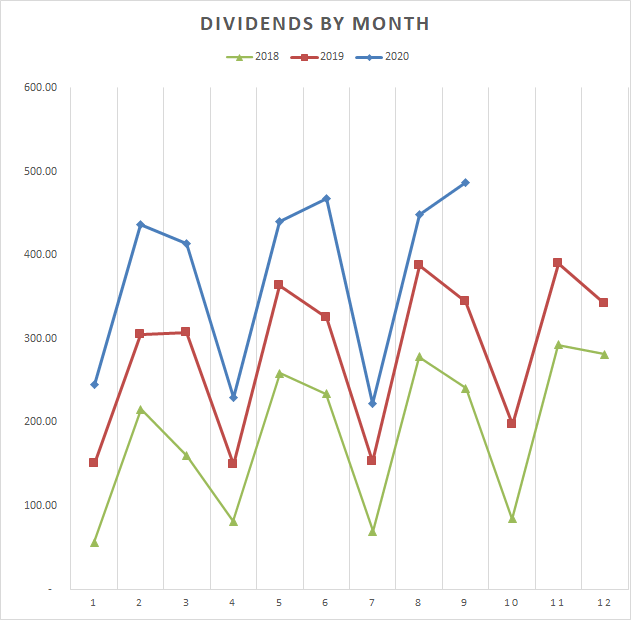 The Sand in Shoes portfolio performed better than the S&P 500 mostly due to having roughly 35% of the portfolio in fixed income instruments. My large cap investments also fared slightly better than the S&P 500 which helped give me a better month than some folks experienced. Another factor is the two sectors that were actually in the green for the month, materials and utilities, are sectors where I am overweight.

For the month I was down 1.8% and am now down 3% YTD. Still in the range where one really good month could get me back to even for the year. 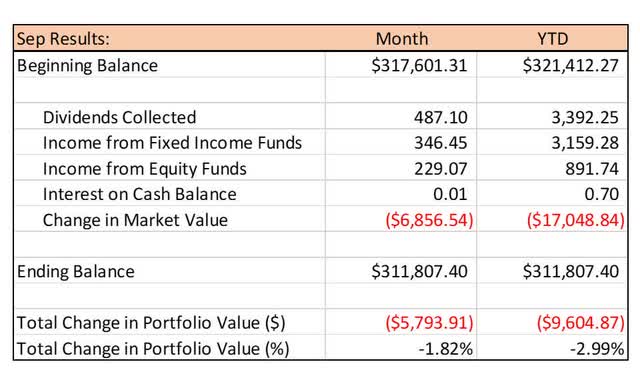 Below are my individual stock positions as of the close of business on September 30th, 2020: 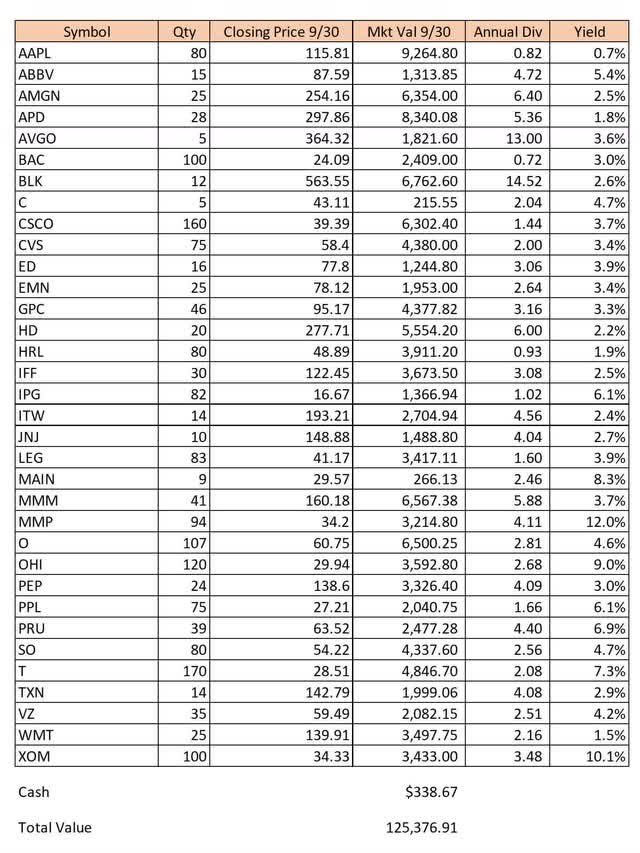 Apple Inc (AAPL) came crashing back down to earth losing 10.3% in September which was quite a drag on my portfolio. Energy continues to underperform in this environment and is now off an incredible 47% in 2020. That sector was down 14.6% in September and of course my two energy stocks were also down double digits for the month.

On the bright side, my two best performing stocks were in the two sectors with positive months. Namely Consolidated Edison Inc (ED), a utility, up 9.1% and Eastman Chemical Co (EMN), a materials stock, up 6.9%. Most of the other stocks I own in these two sectors were also up but these were the two clear winners. 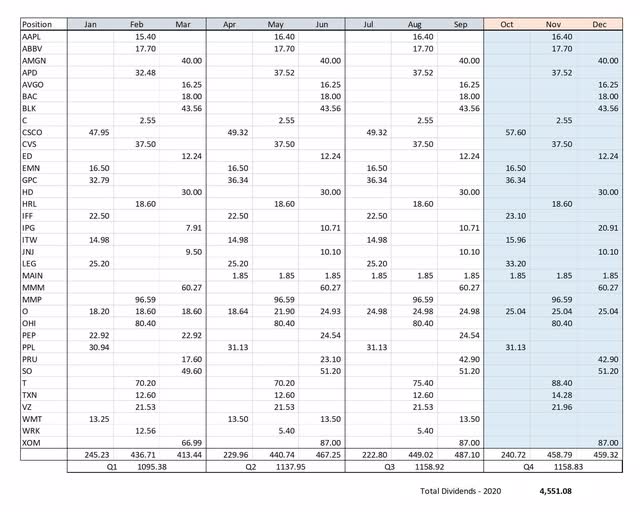 With a small shake-up in my portfolio (more to come on that) and due to a few dividend increases announced during the month of September my projected yearly total dividends did rise by about $20.

Due to the energy sector’s continued decline I am now very underweight in that sector, second only to the communication services sector. Back towards the beginning of the year I was actually slightly overweight in energy!

The sector I am the most overweight in is still the materials sector, despite a recent sale.

Sectors I am potentially going to add capital to in October, besides communications and energy, are utilities, healthcare, and industrials.

Asset Allocation of the Portfolio 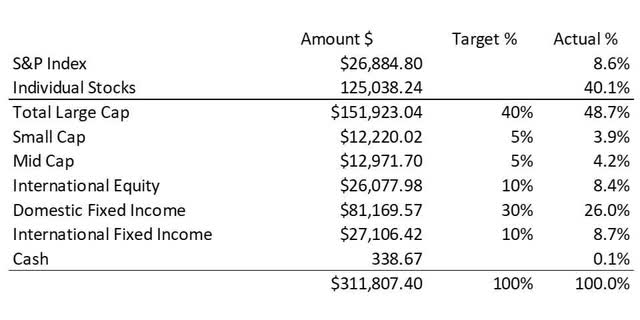 The only asset classes where I had a higher balance on September 30th than at the beginning of the month were the fixed income classes, both domestic and international. Sadly, part of the reason that is the case is because I added cash to one of my domestic ETFs. International fixed income was the only asset class that notched some (small) gains in my portfolio, up about $100.

But that’s better than my small cap ETF which got absolutely slaughtered, down 5.1% ($650) for the month. Now that the weighting there is down below 4% of my overall portfolio I may have to look at adding some cash there in the future if it doesn’t turn around shortly.

Sales and Purchases in September

On the last day of the month I emptied the coffers and added $300 more to my fixed income investments. Boring, I know, but these additions will hopefully pay me handsomely in the future, supplementing my growing dividend income. 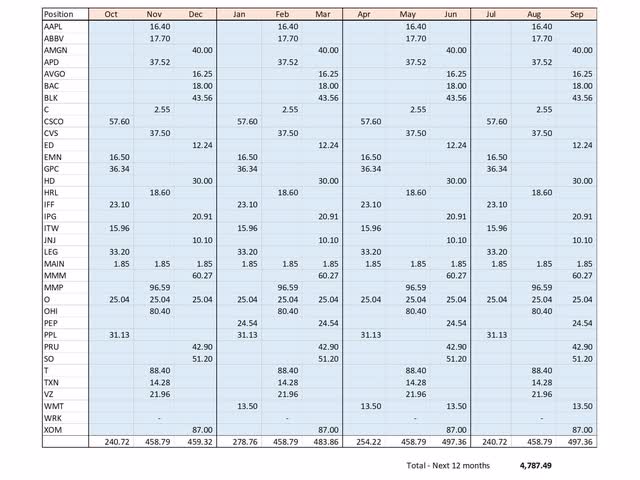 Total dividends expected over the next 12 months, barring any changes to dividend policy or share count, is $4,787.49, an $80.37 increase over August.

Obviously when you sell shares you lose the future dividends associated with those shares. Fortunately, the (recently cut) dividend from WRK was easily replaced and then some with the higher-yielding shares of IPG and T. There were also three dividend increases announced during the month of September, and all of these changes are detailed below:

The slope of the line ticked up slightly in September and the was the largest monthly increase since February. 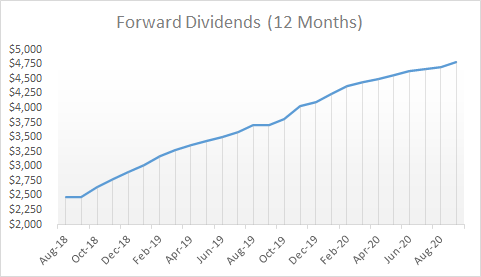 Last month I detailed several things that I hoped to accomplish in September and I am happy to report that I did all or approximately all of them.

I had also planned to possibly sell my first dividend-cutter, WRK, before the end of the year and I definitely accomplished that. Check.

Looking ahead, while my fixed income investments were a larger percentage of my portfolio than they were on August 31, I am still overweight in equities so I do still plan on adding ~$1,000 each month to them until I am closer to my target allocation.

As mentioned my small-cap equity exposure is well below my target allocation and so if things don’t rebound there it may be time to throw a few bucks into that bucket. The story is less dire for mid-caps and international equities but they also bear watching.

And finally in order to rebalance my equity portfolio I will almost certainly add funds to one of the following sectors (in order, at least at this time): communications services, energy, utilities, health care, industrials. Those are the most underweight sectors as of September 30.

Not a great month in terms of total portfolio return, though I doubt many people fared very well. However it was a very good month for dividends collected and I did manage to do a bit of portfolio clean-up, selling the first stock of mine to cut their dividend since I started writing for Seeking Alpha over three years ago.

I appreciate all of you that took the time to read this and hope you are all making progress towards your goals, whatever they might be. Best of luck, and cheers!

Disclosure: I am/we are long AAPL, ABBV, AMGN, APD, AVGO, BAC, BLK, C, CSCO, CVS, ED, EMN, GPC, HD, HRL, IFF, IPG, ITW, JNJ, LEG, MMM, MMP, O, OHI, PEP, PPL, PRU, SO, PRU, T, TXN, VZ, WMT, XOM. I wrote this article myself, and it expresses my own opinions. I am not receiving compensation for it (other than from Seeking Alpha). I have no business relationship with any company whose stock is mentioned in this article.