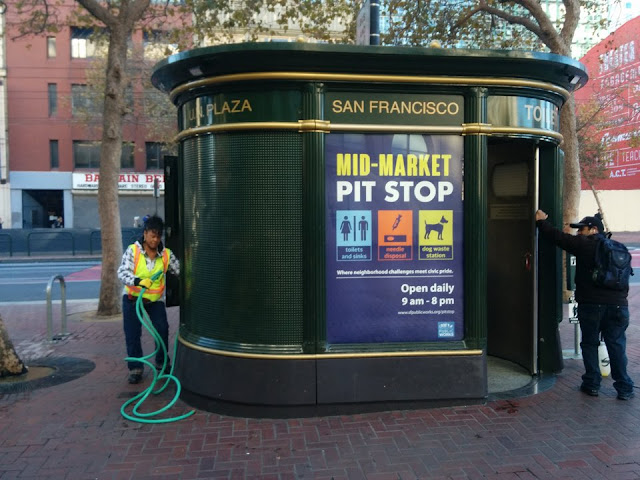 Welcome to the People’s Republic of San Francisco, where socialist planning is always expensive.

San Francisco officials have declared the recent test run of keeping the city’s Pit Stop public toilets open all night a success. The cost to the city is about $28.50 per flush and the city doesn’t even wipe your butt for you at that price.

“This is not complicated. When people have access to a clean, safe restroom, they will use it,” Mayor London Breed said last week when she announced the city would continue to keep the three Pit Stops used in the test open all night until July of 2020 while officials consider expanding the program to other locations, reports The San Francisco Chronicle.

“We should open all of them downtown, in my district, 24 hours,” said Supervisor Matt Haney, where the sidewalks are often used as the current pit stop public toilet.

Public Works has estimated that keeping all 24 of the city’s Pit Stops open around the clock would cost an extra $8.25 million a year. A funding source has not been identified.

Staffing is the primary cost. The attendants ensure the public bathrooms are kept safe, clean and used for their intended purpose. History has shown that without attendants, public toilets in some of San Francisco’s most challenging neighborhoods are used for drug activity and prostitution, and become targets of vandalism…Two-member teams staffed the toilets during the overnight hours. Just one attendant staffs them the rest of the time.

But it does not appear that SF sidewalk poopers are willing to walk far for these toilets, or maybe even go through the hassle of opening the Pit Stop door.

[F]rom mid-August through mid-November…according to Public Works logs, the three toilets were used a total of 10,518 times between 11 p.m. and 7 a.m., when they would normally have been closed…

[Though] there was a reduction in demand for [sidewalk] cleanups, that reduction doesn’t appear to be all that great…

In the quarter-mile radius around the Tenderloin Pit Stop, calls [for sidewalk cleanups] went from 188 in the three months prior to the test to 176 during the three-month test — that’s a drop of four calls per month.