Since we recommended Sailpoint (SAIL) stock in early August, the stock is up around 24%. YTD, the stock is up about 81%, yet the valuation is reasonable. Sailpoint is an underappreciated software play that is tied to digital transformation and Identity Governance and Administration (IGA). Identity is the pillar around which enterprise security is being re-architected as firewalls no longer can protect an enterprise adequately. As the pandemic forced enterprises into a remote work environment, enterprises gave all their employees access to business applications. Securing the applications and governing access to applications has taken greater importance. In such a situation, established incumbent offerings from companies such as Oracle (ORCL), IBM (IBM), and Broadcom (AVGO) are unable to keep up with the new demands on them. Therefore, enterprises are looking to replace incumbents with newer solutions such as the ones offered by Sailpoint that can work both on-prem and in the cloud. Consequently, we believe Sailpoint is one of the best positioned IGA players in the industry and is, therefore, a buy. For more details on Sailpoint’s business, please refer to our prior note on SA.

Sailpoint reported another solid quarter with revenue beating both on the top and bottom lines, despite an increasing number of subscription deals. Sailpoint beat revenue by about $10 million or about 12%. EPS was $0.11 versus a consensus estimate calling for a loss of $0.05. EPS beat was driven by higher than expected revenue and lower than expected Opex. Opex was $64 million versus our $69 million estimates. The following chart illustrates the F3Q results versus estimates. 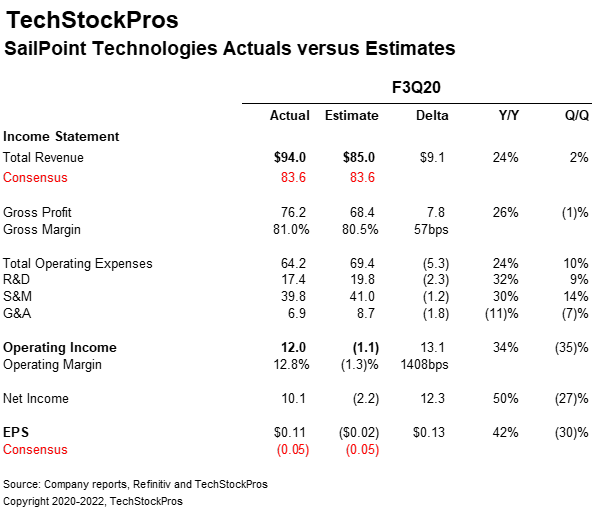 YTD, the stock is up 81% YTD, versus Nasdaq of 39% and S&P of about 15%. However, since the company reported results on November 5th, Sailpoint underperformed both S&P and Nasdaq indices. Sailpoint stock is down about 4%, but we expect the stock to recover as the quarter progresses. The following charts illustrate Sailpoint’s performance. 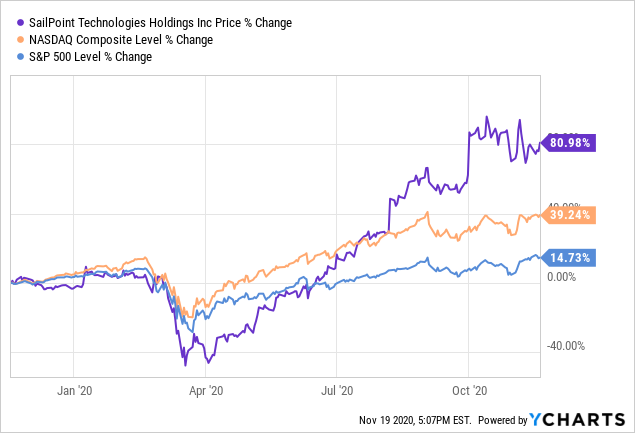 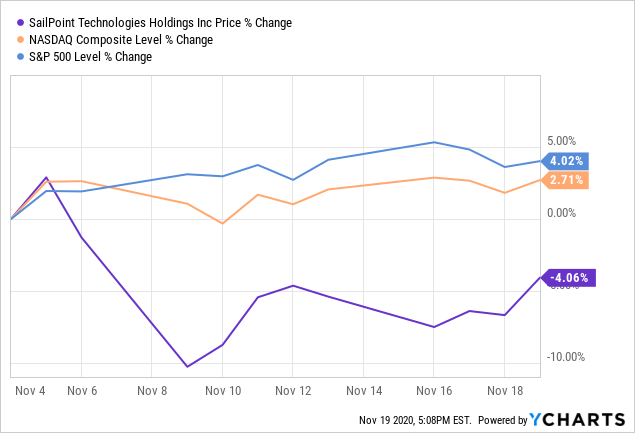 Management Bullish on its prospects

CEO Mark McClain expressed confidence in Sailpoint’s business prospects. He noted that “We continue to be mindful of the economic environment and its potential impact on close rates, but the strength of our recent performance gives us confidence in our ability to execute despite a continued challenging macro environment”. Mr. McClain laid out his three priorities for 2021 and beyond –

Second: Delivering innovative, differentiated SaaS identity solutions that protect and provision today’s enterprise with confidence and at scale; and,

Third: Executing consistently while delivering a reliable identity security solution to the benefit of our customers around the world who depend on us to support their identity and security needs.”

According to the management, highlights from the quarter are:

Guidance may be conservative

The company guided ahead of consensus estimates for F4Q20. The company guided 4Q20 revenue in the $93-95 million range or at the midpoint $1.5 million better than the consensus of $92.5 million. Sailpoint expects SaaS revenue of about $53.0-53.5 million or up about 31-32% Y/Y. Sailpoint guided operating income in the range of breakeven to a loss of about $2million. Sailpoint is looking to hire sales headcount aggressively to tap into the significant opportunity ahead and this is likely to impact Opex going forward. Sailpoint also guided full-year revenue in the range of $355-357 million, with approximately $194 million from subscriptions. Sailpoint expects operating income in the range of $33-35 million. Despite guiding up, we believe the management is still being conservative in issuing F4Q guidance. In our view, another beat and raise are likely when the company reports results in February, making the stock a compelling buy, in our opinion.

The perpetual to subscription transition is perhaps the most significant risk in the near-term, given that many enterprises are looking to buy the software using subscriptions. If more revenue comes via subscriptions than planned, instead of perpetual revenue, Sailpoint may miss consensus estimates leading to a sell-off. For more details regarding risks involved with buying Sailpoint, please refer to our prior writeup on SA.

What to do with the stock

Following F3Q20 blockbuster results, several Wall Street analysts raised their Sailpoint price targets. Out of the 16 analysts covering Sailpoint, 13 are buy-rated, and three are hold rated. Of the 13 buy-rated analysts, five analysts rate the stock a strong buy. The average Price Target (PT) on the street is $53, and the median is $54. The following chart illustrates some of the PT changes following the company’s results last week. 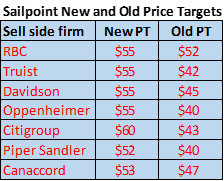 The sentiment has improved since we first wrote about Sailpoint in August. We expect the sentiment to improve further for the rest of the year as the company executes on its roadmap, pipeline, and its outlook. Also, we expect some of the other analysts covering Sailpoint to upgrade the name over the next few months. Sailpoint is up about 81% YTD, yet we believe there is still more upside to Sailpoint. The stock is still compelling from a valuation perspective. The stock is trading at 8.4 EV/sales versus the peer group average of 9.4x. The company’s growth rate is understated due to the increasing subscription revenue mix over the last two quarters. The following chart indicates the Security Peer Group valuation. 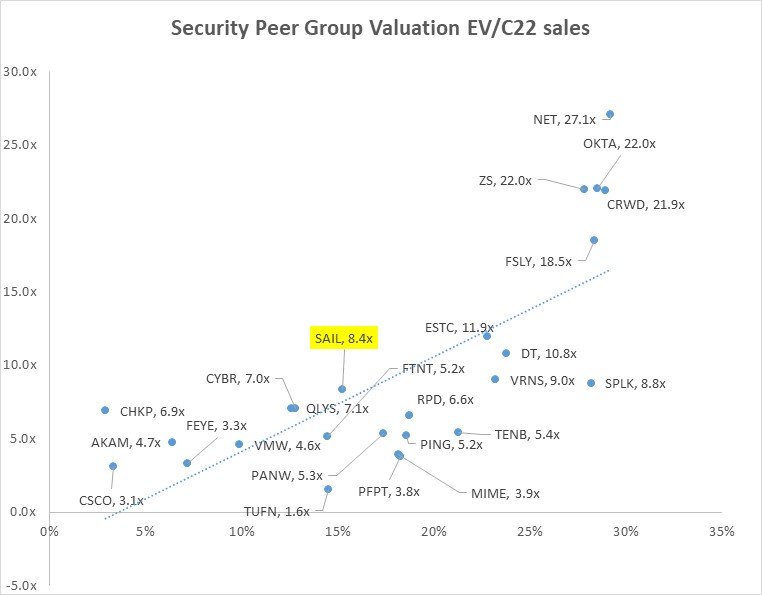 IGA will continue to benefit from the secular trend towards Identity becoming the core pillar of security. Given our confidence in Sailpoint’s position within the Identity and Governance market, we would be buyers of shares incrementally. We would be buying shares as opportunities present themselves. Given that it is futile to predict how high the valuation might go, and due to increasing volatility in the market, we believe the safer way to buy this stock is in small increments and over time.

Disclosure: I am/we are long SAIL. I wrote this article myself, and it expresses my own opinions. I am not receiving compensation for it (other than from Seeking Alpha). I have no business relationship with any company whose stock is mentioned in this article.

READ ALSO  Rosenberg: Why Comparisons Between Bitcoin & Gold Are Absurd

Previous PostElon Musk Is Now The Second Richest Person In The WorldNext PostSE: These Countries Were Most Resilient in Dealing With Covid-19