It’s been a rough couple of months for the junior gold sector (GDXJ) as several names have fallen 30% or more from their highs with the recent correction in gold price (GLD). However, Sabina Gold & Silver (OTCQX:SGSVF) is one name that’s actually held up quite well during the sector-wide carnage, up 35% in Q3 vs. the Gold Junior Index’s 10% return. The stock’s outperformance is likely tied to continued drilling success at Back River and the realization that development could be a reality if gold prices hold up at current levels. Based on a higher gold price, and the potential for a staged approach to Back River, I see the stock as one of the more attractive gold juniors out there in the sector currently. All figures are in US dollars unless otherwise noted. 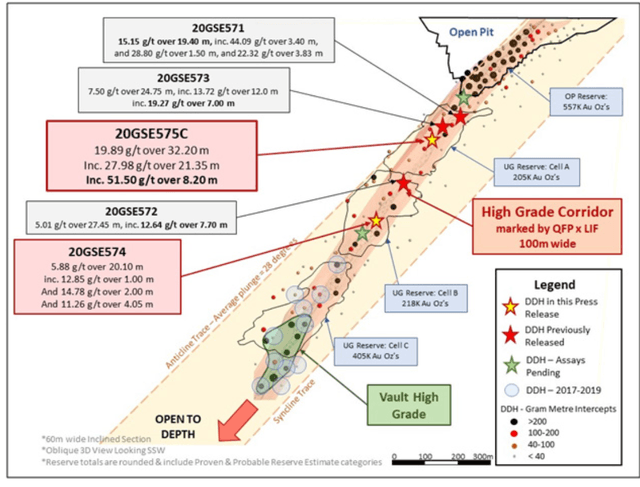 While the recent drill results are certainly encouraging, it can be tough to move the share price of a $500-million market cap junior with solely drilling results. In fact, the company has been releasing solid exploration results for years now since its 2015 Feasibility Study, but the big hurdle for Sabina’s Back River Project in northern Canada is that it’s remote, meaning it costs an arm and a leg to build. After subtracting out development spending to date and going by more recent estimates, the projection is that Back River will cost roughly $315 million to build, which is well above the average upfront capex bill for most developers out there currently.

Currently, Sabina’s Back River Project is home to 7.18 million ounces of gold resources at an average grade of 6.26 grams per tonne gold. This is a rarity in the gold sector as the scatter plot below shows of Canadian gold projects, as there are only two projects that come near Sabina’s size and grades: Osisko Mining’s (OTCPK:OBNNF) Windfall and Skeena Resources’ Eskay Creek. Generally, the sweet spot for a mix of high-grade and significant mineral endowment is 3 million or more ounces at 3 grams per tonne gold or higher, and the below chart shows that Sabina is clearly the leader when combining size and grades.

As noted earlier, while Sabina is clearly superior when it comes to resource size and grades, the project lost points due to upfront capex, which would require either a partner to build, a significant amount of debt, and or hefty share dilution. However, the company expects to release a new Feasibility Study next year. It’s possible it might consider a staged approach vs. the 6,000 tonne per day whole-ore leach process plant suggested. Instead, we could see the company go ahead with a 3,000 tonne per day plant, which would significantly lower the upfront capex from estimates of between $315 million and $360 million to below $300 million. This might not seem like huge savings, but it’s about the best the company can do given how remote the location is in Nunavut, Canada.

If we assume initial capital costs could come in near a best case of $295 million with the 3,000 tonne per day staged approach, this makes Sabina’s Back River one of the most attractive large-scale gold projects globally. The chart above shows that it would be only slightly behind Eskay Creek with estimated upfront capital of $233 million at the Preliminary Economic Assessment stage. It’s important to note that a staged approach with much lower throughput early on would significantly weigh on gold production, with gold production likely to come in closer to 275,000 ounces per year vs. the estimate of 413,000 ounces for the first four years, and 346,000 ounces per year over the mine life. However, even at a reduced annual output rate, this is still a massive project that would be attractive to an intermediate or senior gold producer.

If we move over to operating costs, Sabina also makes up for its high upfront capex relative to peers with exceptional costs, ranked 5th out of eight gold projects globally from an all-in sustaining cost standpoint. Based on the 2015 Feasibility Study, costs were expected to come in at $671/oz, below the peer average of $711/oz for large-scale gold projects across all jurisdictions. If we exclude any non-Tier-1 jurisdictions, Sabina’s Back River would be ranked 3rd out of six projects, just behind Skeena’s Eskay Creek and First Mining’s (OTCQX:FFMGF) Springpole. Given that the industry average costs operating costs are currently sitting at $980/oz as of FY2019, many large gold producers would love to get their hands on a project with costs this low.

So, how’s the valuation look?

As we can see from the scatter plot above, Sabina currently trades at a significant premium to its peers at an enterprise value of $87.99/oz. The median enterprise value per ounce for undeveloped Canadian gold juniors is closer to $35.00~ currently, but as pointed out earlier, Sabina’s Back River project is clearly one of a kind. While the stock looks very expensive based on the above chart, we can see that Sabina’s valuation is less extreme when compared on a resource grade vs. enterprise value per ounce basis, as there’s a clear positive correlation between resource grade and enterprise value per ounce. As shown below, high-grade explorers can fetch up to $270.00/oz like Battle North Gold (OTCQX:BNAUF) and typically command valuations closer to $100.00/oz. I would argue that the fair value for Sabina’s ounces is closer to $105.00/oz as while the company’s Back River Project is one of a kind, it loses points for remote location and high upfront capex.

To summarize, while I was previously lukewarm at best when it comes to Sabina Gold & Silver, I believe the stock could come back into favor if the gold price finds a floor at $1,750/oz. This is because the higher gold price is starting to make higher-capex projects more attractive, given their much faster payback. Meanwhile, a staged approach to building Back River could significantly transform the economics and its ability to fund the project a little easier. While I would not place Sabina in my top-12 takeover target due to its remote location, I do see Sabina as a decent junior in the gold space with an improving investment thesis. Therefore, I would view any pullbacks below US$1.75 as low-risk buying opportunities.

Disclosure: I am/we are long GLD, SKREF. I wrote this article myself, and it expresses my own opinions. I am not receiving compensation for it (other than from Seeking Alpha). I have no business relationship with any company whose stock is mentioned in this article.