RPC Inc. Lingers But Is Not Far From A Recovery (NYSE:RES)

Still Not In The Zone

RPC, Inc. (RES) may keep its feet dragging for some more time, although its management is optimistic of a next-year recovery. I continue to see an excess supply of the pressure pumping equipment and the paucity in the upstream capex budget affecting the drilling industry. In this environment, RES did well to add one more pressure pumping fleet to its portfolio in Q3. Plus, over time, it will benefit from stretching the existing Tier 4 and dual-fuel capability among its customers keen on applying ESG (Environmental, Social, and Governance)-compliant equipment. I do not see the stock price move up sharply in the short term.

The company is addressing the operating margin concerns after reducing the cost of revenues. While a decline in cash flow from operations has been cause for trouble so far in 2020, a zero-debt balance sheet and a much lower capex can lead to higher free cash flow. I think investors might want to keep the stock under the radar because a healthy balance sheet can induce a multiple trading expansion in the medium to long term.

Industry Indicators: Some Balances Are Emerging 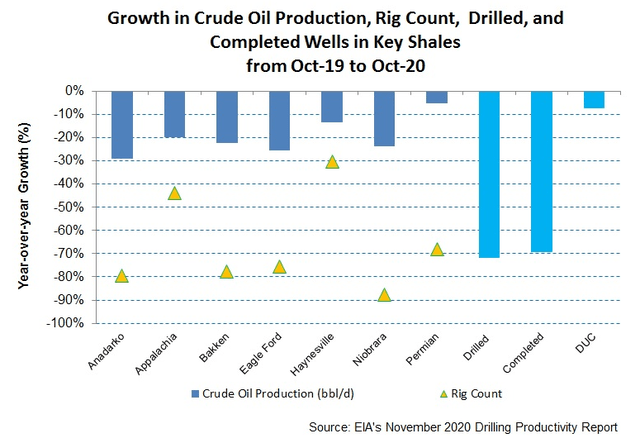 In the past year until October 2020, the completed wells count (69% down) and drilled wells count (72% down) in the key U.S. unconventional Basins were drastically down. In comparison, the drilled-but-uncompleted (or DUC) wells were relatively resilient (7% down) because the producers keep DUCs (drilled but uncompleted) steady to bring production back in the medium term.

The Permian was the only key shale that saw a single-digit production decline (7% down) in the past year, although the crash did not spare the rig count (68% down). All the other regions saw double-digit crude oil production decline. On average, the crude oil production in these shales fell by 20% in the past year. With increasing efficiency following multi-pad drilling and deployment of new equipment, the pressure pumping service requirements waned.

Because the business of pressure pumping industry remains oversupplied, the pricing and returns have stayed low. RES had revised down the pressure pumping fleet count drastically to four horizontal fleets in Q2, and later increased this to five after Q3. The pressure pumping capacity remained unchanged in Q3 compared to the previous quarter. In the near term, management believes that pricing has already hit bottom and will not deteriorate further. The domestic oilfield activity might have bottomed out during Q2. Due to the prospect of a better outlook, the stock outperformed the VanEck Vectors Oil Services ETF (OIH) in the past year.

Nonetheless, the thread of a drilling activity recovery in Q3 was insufficient in generating sustainable financial returns for the OFS industry. The uptick was strictly confined to the well completion jobs. The paucity of new drilling will continue to weigh on pricing, especially when the upstream industry goes through a consolidation phase. 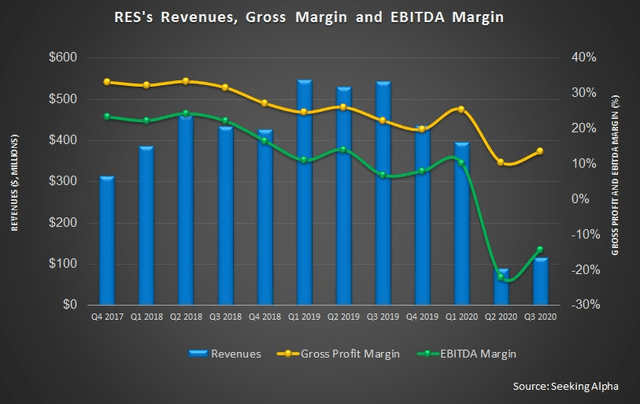 Until now, excess bidding on drilling work opportunities ensured pricing stays low. In the future, RES expects some stabilization and a return to higher utilization of the pressure pumping assets. Even with the typical fourth-quarter cyclicality, the losses will not be aggravated in Q4 beyond the level observed in the past years. To put things in perspective, RES’s quarter-over-quarter revenues declined by 17% in Q4, on average, in the past two years. During the same period, its EBITDA decreased by 21%. This year, the company can see some expected gains in early 2021. The company will remain disciplined in terms of pricing to maintain a reasonable level of profitability. To know RES’s fundamental drivers, you can read this.

What Are The Current Drivers? 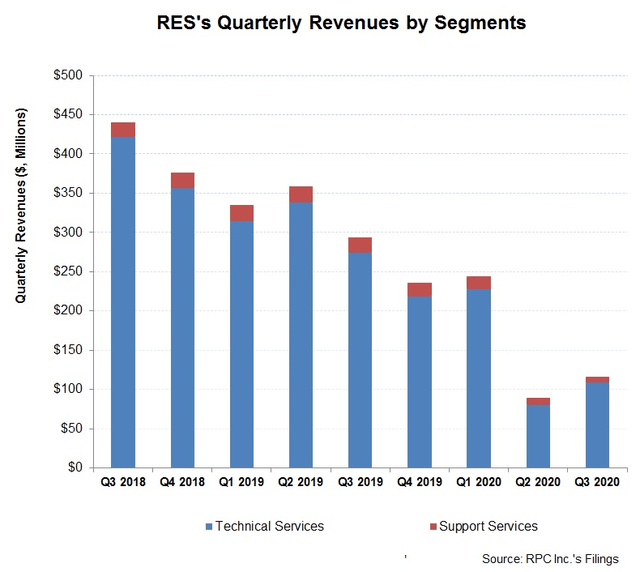 In Q3 2020, Technical Services revenues increased by 36% compared to Q2 2020. Higher activity levels in several service lines led to the sequential revenue rise in this segment. However, the revenue gain did not fully materialize at the operating margin level, as the segment continued to reel under $25 million loss in Q3. The Support Services segment revenue declined by 17% in Q3 versus a quarter ago, while the operating loss widened during this period.

RES made inroads reduce the cost of revenues as a percentage of revenue, which decreased by 300 basis points in Q3 versus a quarter ago. The company saved from efficient labor utilization. The gross profit margin inflated to 13% from 10% earlier. The benefits rubbed off with the EBITDA margin, although it continued to stay in negative territory.

Net Cash Balance Is A Plus

RES maintained zero debt as of September 30, with a positive cash & cash equivalents balance ($146 million), which is positive in challenging periods. However, investors should note that the company has $32 million in pension liabilities.

In 9M 2020, RES’s cash flow from operations decreased by 23% compared to a year ago, led by the year-over-year revenue fall. Despite that, a steep capex cut led to a positive and sizable free cash flow ($79 million) in 9M 2020. Also, I think a 74% lower capex budget for FY2020 compared to the previous year can add to the free cash flow improvement in FY2020. While a part of the capex will account for the maintenance of the existing equipment, a part of it will upgrade the dual-fuel pumping equipment capability. Although the company has kept its earlier plans of converting its entire fleet to dual fuel, it benefits from stretching the existing Tier 4 and dual-fuel capability among its customers who are keen on applying ESG (Environmental, Social, and Governance)-compliant equipment. 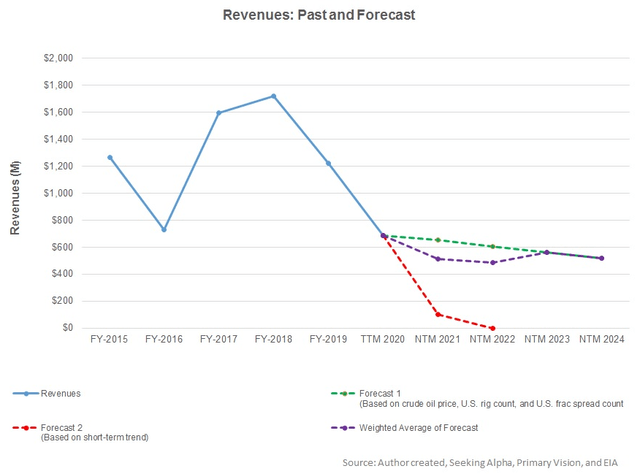 I have observed a regression equation based on the historical relationship between crude oil price, U.S. rig count, U.S. frac spread count, and RES’s reported revenues for the past five years and the previous eight-quarter trend. Based on the model, I expect revenues to decrease sharply in the next twelve months (or NTM). It can improve in 2023. 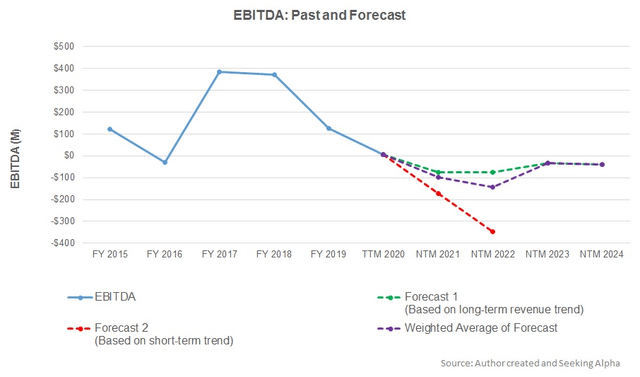 Based on the regression model and the forecast revenues, I expect the company’s EBITDA to decline sharply and turn negative. In 2022, the model suggests a further dip in EBITDA, while in 2023, it can partially recover.

What’s The Take On RES?

Over the past couple of months, crude oil price has stabilized at the $40’s level, while there has been a rise in the frac spread count. No doubt, the excess supply issue in the pressure pumping equipment business and the upstream capex budget squeeze will haunt the drilling industry for some more time. However, the company’s management exudes the confidence of a resilient Q4 and a possible recovery in early-2021.

So, RES added one more pressure pumping fleet to its portfolio in Q3. Plus, it addressed the operating margin concerns after reducing the cost of revenues. With a smaller pressure pumping fleet base, the company is better prepared to survive a sustained downturn. RES has been free of debt, although it does carry sizable pension liabilities. While a decline in cash flow from operations was worrying, a much-lower capex has aided its free cash flow improvement. I expect returns to stay muted in the short term because of the headwinds in the energy sector, but the stock’s trading multiples can expand relative to those of many of its peers in the industry in the long term.