October 28 may have been a horrible day for the stock market, but it was a good day for Root Inc. (NASDAQ:ROOT) and its IPO. According to Renaissance Capital, Root “raised $724 million by offering 26.8 million shares (10% insider) at $27, above the range of $22 to $25.” The company began its first day of trading by jumping to $28.44, before falling in the afternoon and finishing back at $27. Lead underwriters for the IPO included Goldman Sachs and Morgan Stanley, and the company currently has a market cap of $7.1 billion.

In many ways, auto insurance has not changed that much compared to 50 or even 100 years ago. An auto insurance provider receives payment and determines premium using small bits of data such as your age and your vehicle. But there is little personalization, as the auto insurer bets on the law of large numbers to smooth out any outliers.

Root argues in its S-1/A that there is plenty of room for a disruptor like itself to change this stolid industry. The key is a technology platform which uses telematics, which Root defines as “a motion capture device that allows the collection and transmission of telemetry data, in our case facilitated by our customers’ mobile phones.” Essentially, Root customers allow the company to track its driving with an app and rewards good drivers with lower rates.

Many established insurance companies like Allstate (NYSE:ALL) have telematics programs in place. But Root argues that its program is much more extensive and thus can reach better conclusions with more data. As one example, Root points out that drivers who hard brake more are more likely to end up in an accident and so may need a higher premium. But an urban driver may have to hard brake more often given their environment, and so Root can figure out what is the appropriate amount to charge.

The U.S. auto insurance market is not poised to grow rapidly over the next few years. Mordor Intelligence predicted a CAGR of just 3% up to 2025 even before the coronavirus hit. The coronavirus will hurt the auto insurance industry as a whole, as people will drive less whether due to economic harm or due to not needing to commute anymore.

But some of these very trends could end up benefiting Root. Customers who do not drive as much and do not want to pay as much for insurance will turn to a company like Root which offers lower rates. Root in partcular caters to a younger demographic which is more comfortable with technology and willing to install apps on their phone which will save money. These long-term trends are good for the company and may hurt competitors less willing to embrace telematics.

The question about whether Root is an insurance or tech company becomes even more important given that Root’s financial numbers look more like a tech IPO than a traditional insurance company. Thanks in part due to an aggressive marketing push, Root has been able to grow rapidly. According to its SEC statement, Root reported a revenue of $245.5 million in the first half of 2020, up 135% compared to the same timeframe in 2019. Its growth rate from 2018 to 2019 was even higher as the company grew by over 600%.

But like most tech IPOs, Root is not profitable. It only turned an adjusted gross profit for the first time in the first half of 2020, and reported a net loss of $144.5 million in the same period. Its profitability numbers are heading in the right direction. Like most tech IPOs, Root is spending relatively less on sales and marketing as it continues to grow and hopes to increase revenue per customer. Root has a footprint in homeowner and auto insurance, and aims to increase the number of those policies over time.

Then there is the matter of Root’s valuation, which is another example of why the question of whether it should be viewed an insurance or tech company is so important. Root has a market cap of $7.1 billion, and as of June 30 had $240.9 million in cash and $168.2 million in long-term debt. 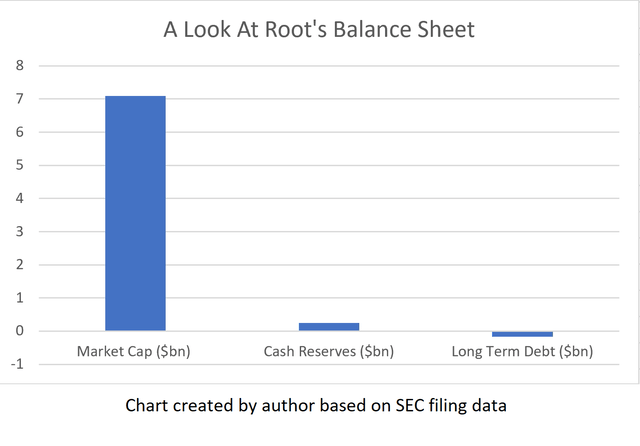 It should be noted here that these figures indicate that Root’s balance sheet is healthy, which is further shown by how it plans to use its IPO proceeds for capital expenditures and general corporate purposes instead of buying down debt.

With the above figures, we can calculate an enterprise value of about $7.1 billion. Root’s revenue in 2019 was $290.2 million. If we assume a consistent growth rate of 135% for all of 2020, the same growth rate as the first half, Root’s 2020 revenue will be about $681 million. The end result is an EV/revenue ratio of 10.4, though the real figure will probably be somewhat higher.

Is Root an insurance company playing at being a tech company so that it can justify its massive losses and outsized valuation, or is it truly a tech company which will change how insurance is conducted? The fact that it has achieved such an interest from investors suggest that many do believe that there is a major opportunity for change in the insurance industry and companies which focus on personalization and tech will achieve high valuations.

Given its incredibly high growth and its business model which truly can change our approach to auto insurance, I am inclined to argue that Root is more of a tech company and so its valuation is fair at its present value. The big challenge is whether this company can improve its profitability numbers in the near future, and any downward trend should give investors so far. But the financial numbers and market growth we have so far indicates it is heading in the right direction.