Last week, Warsaw and Budapest set out their opposition to a mechanism that makes the disbursement of EU taxpayers’ money conditional on respect for fundamental principles including the independence of the judiciary.

“This attitude is against the whole of Europe and against the interests of Polish and Hungarian citizens,” Mr Orban said, adding that an agreement should be reached “as soon as possible”.

The Romanian premier took the reins of a minority government last year, promising to reverse laws introduced by the previous Social Democrat administration regulating the judiciary.

“We completely changed our attitude regarding justice, regarding rule of law, regarding corruption,” Mr Orban said, rejecting the policies pursued by the Social Democrats, whose former leader Liviu Dragnea received a prison sentence in May 2019 for abuse of office. 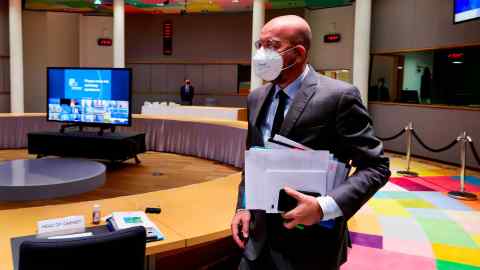 “We say very clearly: in order to assure the European taxpayers that the money will be used in a correct and legal way, this connection between rule of law and using European funds is a correct one.”

Mr Orban acknowledged that Romania, along with Bulgaria, has been under special monitoring from Brussels since 2007. He said he had not been able to make improvements to the judiciary requested by the European Commission in 2019 because he still does not have a majority in parliament, but he hopes that will change following elections on December 6.

Polls put Mr Orban’s National Liberal party ahead and a convincing victory could put an end to years of political turmoil. Romania has had five premiers in the past five years and he has ruled out any collaboration with the Social Democrats.

Mr Orban insisted that his support for tying the disbursement of EU funds to the rule of law is strong and that it had helped President Klaus Iohannis, his political ally, to secure a mixture of grants and loans through the EU budget and recovery mechanism worth €80bn.

“We have never had such financial support and we appreciate the decision at the European level very much,” he said. He added that a “national recovery and resilience” plan could see Romania’s economy achieving an annual growth rate of over 6 per cent by 2024, while reducing the deficit from 9 per cent to 3 per cent.

He also said he would use EU recovery money to invest €6bn in the healthcare system, which has struggled to cope during the pandemic. More than 420,000 people have been infected in Romania and more than 10,000 have died.

No new hospital has been built in the capital Bucharest since the collapse of communism and the problems in the health system were laid bare recently when a fire broke out in a hospital in a city in the north-east of the country in which ten patients being treated for Covid-19 died.