A surge in new Covid-19 infections is raising doubt about whether Myanmar will be able to hold its general election as scheduled on November 8.

Aung San Suu Kyi’s National League for Democracy will seek a new five-year mandate in just over six weeks. She is widely expected to win because of her lasting popularity among her political base, including voters from the dominant Bamar ethnic group.

However, after keeping infections under control during the pandemic’s early stages, the country has seen an increase in coronavirus cases over the past month.

As of Wednesday, 6,959 coronavirus cases had been reported in Myanmar — more than double the number in neighbouring Thailand, which has a larger population — and 116 deaths.

The NLD and the country’s elections commission have said they are determined to hold the vote as planned. However, observers have questioned whether voters will feel comfortable enough going to the polls to yield a credible turnout.

Yangon, the country’s largest city, is under lockdown, as is Rakhine state in western Myanmar, whose border with Bangladesh has proved porous during the pandemic, causing local infections to rise.

“The government says it’s determined to go ahead, but it’s the virus that’s in control of the situation,” said Richard Horsey, a political analyst and adviser to the International Crisis Group, a non-governmental organisation, based in Myanmar. “Without a big drop in cases, it’s hard to see where you could hold an election where people would feel safe to go out and vote.” 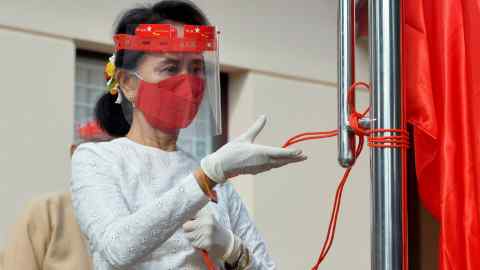 Preparations for the vote were already under criticism by human rights groups. Candidates from the Rohingya minority, who are denied citizenship rights and fled in large numbers to Bangladesh after a 2017-18 military crackdown, have been barred from running and will be unable to vote.

About 1m people in parts of Rakhine, where many Rohingya still live, and the neighbouring Chin state remain under an internet shutdown which civil rights groups say will disenfranchise minority voters.

International observer groups have been unable to come to Myanmar ahead of the vote because of the country’s ban on international commercial flights in response to Covid-19.

While few in the country doubt the NLD will win, the size of its majority is the main variable around the upcoming vote. Its largest opponent among about 90 smaller parties competing in the vote is the military-backed Union Solidarity and Development party.

Dereck Aw, lead analyst for Myanmar at consultancy Control Risks, said in a research note last week that coronavirus-related restrictions would strengthen the NLD’s advantage against emerging pro-democracy and regional parties, which represent the biggest threat to the party’s parliamentary majority.

“However, if infection rates continue to rise, especially in the commercial capital and NLD bailiwick Yangon, a public health crisis might force the NLD to postpone the election to early 2021,” he wrote.