Coastal flooding is set to rise by about 50 per cent over the next 80 years and could threaten assets worth 20 per cent of global GDP, according to a study that heightens concerns about the social and financial impact of climate change.

There could be a ten-fold increase in extreme weather events that cause floods, such as storms and tsunamis — from once every 100 years to once a decade by 2100 — according to research by the University of Melbourne and the University of East Anglia, published in Springer Nature on Thursday.

The world has been battered by extreme weather over the past year, from heatwaves in Europe to floods in South America and wildfires in Australia. Climate scientists have warned that existing temperature rises mean that some future events can no longer be prevented, and that the best defence is to try to limit their severity.

“The sea-level rise is now already baked in, the glaciers are melting and they aren’t going to stop melting for hundreds of years. Even if we reduce our greenhouses gases today we’ll still have significant flooding by 2100,” said Professor Ian Young, infrastructure engineer at the University of Melbourne and co-author of the report. “We’ve got to start looking at adaptation measures,” he added, pointing to engineering structures already being developed in Holland and the relocation of at-risk populations, such as in Papua New Guinea and Alaska.

More than 225m people — equivalent to the population of Brazil — will be at risk of flooding by the end of the century, the study found — an increase of 77m from 2020 levels. This would threaten an area with an economy worth up to $14.2tn, according to the estimates, or 20 per cent of global GDP.

“What this study shows is that the impacts of future sea level rises . . . will affect nations across the globe, some that will have the resources to adapt to the threats posed, like north-west Europe, but many that will not, such as Bangladesh and Pacific island states,” said Jonathan Bamber, professor of glaciology at the University of Bristol. 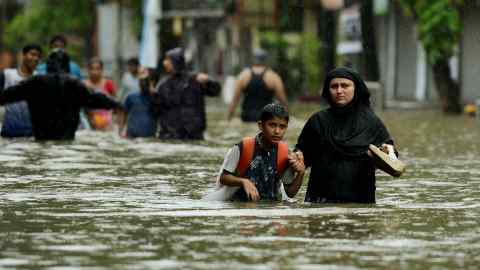 Counter to common conceptions of the causes of widespread inundation, the report found that close to 68 per cent of the coastal area likely to be flooded will be caused by tide and storm events, while only 32 per cent will be caused by regional sea level rises.

The analysis does not take into account existing flood defences in places such as Rotterdam and Shanghai, “hence these estimates need to be seen as illustrations of the scale of adaptation needed to offset risk”, the report cautions.

Jim Hall, professor of climate and environmental risks at the University of Oxford, described the paper as “impressive” in scope, but noted that “the thorny questions of what standard coastal communities will need to be protected in future, and whether that is affordable, are dodged”.