Mr. Market was so worried about the bank line redetermination. Several industry competitors had experienced some steep declines. Therefore, there was an assumption that Ring Energy’s (REI) credit line was due for a major adjustment. But Mr. Market should have paid attention to the actions of management.

“On April 13, 2020, the Company drew $21.5 million on the Credit Facility, increasing the outstanding total to $388 million. Mr. Randy Broaddrick, Vice President and Chief Financial Officer, commented, “In mid-April, we drew down an additional $21.5 million to take advantage of discounts being offered by a number of our suppliers and vendors regarding payment of their invoices. To date, we have saved the Company over $2 million.”

If Mr. Market makes the modest assumption that management is reasonably competent, then the idea of a 30% or more borrowing base cut is simply not a logical deduction. Managements simply do not go out of their way to cause a financial distress when it could be avoided.

Sure enough, management just reported that the borrowing base declined to $375 million from $425 million. This is the committed to lend borrowing base. Not the useless number that often gets quoted. In any event, the amount that the lenders were willing to lend declined $50 million or slightly more than 10%.

It should be noted that this management seldom selected the maximum borrowing in the past to save on fees for a committed line of credit they just did not see any reason to use. Even after the latest purchase, that conservatism was going to show as a less than average borrowing commitment reduction.

Management took care of the overage with derivative settlement cash as expected. At the current low level of activity, this company has a lot of free cash.

Furthermore, management had a first quarter unrealized derivative gain of nearly $50 million. When second quarter oil prices literally went through the floor into negative territory (briefly), then the derivative contracts became extremely valuable. Management may have only hedged about half the production. But that half was hedged at greater than $50 WTI. Those contracts maintained a reasonable average selling price with adequate cash flow when the oil price sunk to absurd levels.

Management could have idled production and simply lived off the sales of the hedges at the appropriate time. For most analysis, the cash flow should have begun with that assumption and subtracted ongoing costs from that cash flow because production would only begin when cash flow from production exceeded the costs to produce the product at a level suitable to management.

Cash flow during a “shelter in place” where producers are idling production will be safely positive for hedged entities. In fact, compared to regular operations, positive beyond the imagination for most is realistic because many “costs” go down through layoffs and shut-ins of wells.

The first quarter cash flow from operating activities before working capital changes was nearly $25 million. Management can probably keep it at that level or exceed it by shutting in production as needed to keep expenses at rock bottom levels. When prices go extremely low, then sometimes just living off the hedges provides the maximum cash flow.

Management stated that current production was now roughly 5,000 BOED. Management was also watching the latest price rally for sustainability and the differential. Really, management cares what is actually received for production (well head price after differential). The price received has to exceed cash production costs to even think about producing oil from the company wells.

Note that costs may rise as wells age without new lower cost production coming online to keep the corporate average low or lower. As shown above, the cash production costs, including production taxes and lease expense, are under $13 BOE. Therefore, management needs to receive probably at least $15 BOE to consider producing from these wells.

Right now, the current price of oil appears to coincide with the management strategy of slowly ramping up production. When the depreciation is added to the cash costs, then the (very rough because other things can be in depreciation) approximation of well breakeven is roughly $27 BOE. Note this is just “quick and dirty”.

This management will probably begin drilling once the WTI prices stabilize in the mid $30s or better. At those pricing levels, there would be a return from the oil produced to cover the usual risks of drilling and production. These wells appear to have some very low costs per BOE. 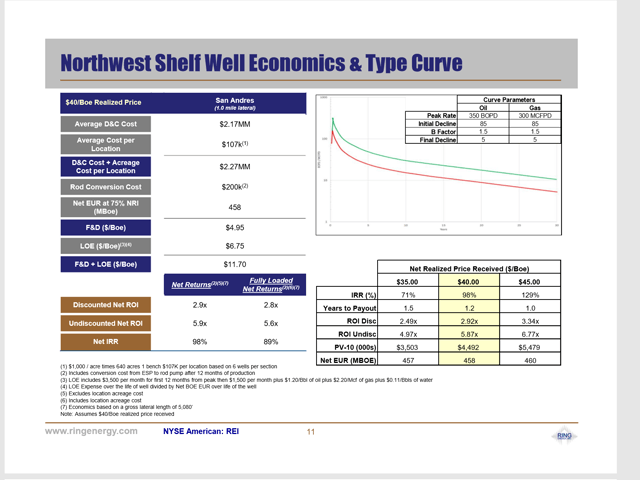 The new Northwest Shelf properties are proving to have some remarkably low costs. In fact, this may be the lowest cost for a primarily oil producer of all the companies that I follow. The returns are remarkable at some very low received prices. 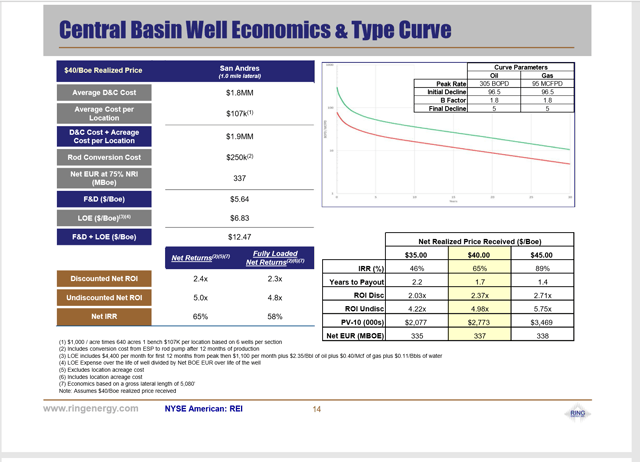 The Central Basin well economics show less profitability than the Northwest Shelf. However, the threshold of a minimum 20% return (prevalent throughout the industry) can clearly be met with a price received of less than $35 BOE. There are very few companies in the industry that can make that statement.

It is, therefore, very likely that this will be one of the first companies in the industry to at least consider the resumption of drilling activities. The costs shown above for new wells mean that, as activity resumes, the corporate breakeven will continue to decline in the future.

Investors can also note that the wells drilled by this company are considered conventional. It is one of the reasons that the well cost listed above is so cheap. The San Andreas, like several other intervals in Texas, has been producing for a very long time. But modern completion techniques have now begun a revival of production from this interval.

The following slide makes clear why the Delaware Basin was sold. 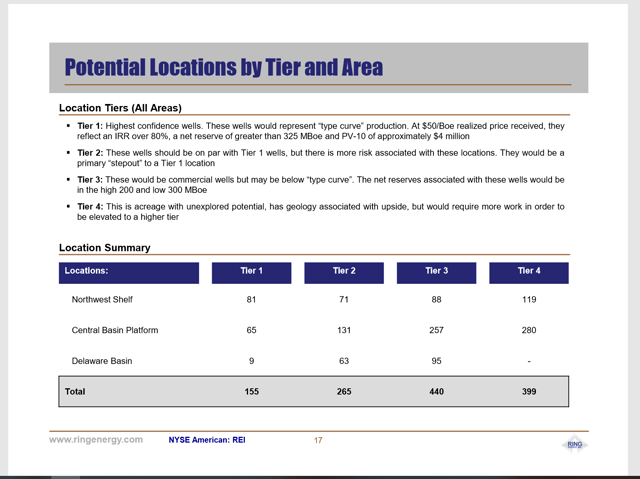 Despite the near to Reeves County and in Reeves County location, the Delaware Basin assets would not be competing for capital nearly well enough. Clearly, the other two leases areas are more profitable for the company.

It is quite possible that had the coronavirus demand destruction not taken place, the sale price would have been higher. However, at this point, there is not really much to be done about the selling price. Management does have other assets to sell should the borrowing base redetermination demand that action.

The borrowing base line of credit balance is likely to decline further during the current fiscal year. If so, then investors can count on management to be a step ahead of the banks. Management will probably continue to watch the oil price rally to determine when to resume drilling and completion activities.

Most likely completion activities will be resumed first. This would allow for a production boost without a lot of money necessary to go through the whole drilling and completion process.

The robustness and timing of this oil price rally really have yet to be accurately determined. What is clear is that the government will spend money to help the economy recover quickly in an election year. Thank goodness for elections!

Long term, the low costs of this conventional opportunity provide a long-term competitive advantage. Should oil prices return to the WTI $50 range and stay there, this company should show an impressive cash flow build, given the profitability of its wells.

Like many microcaps, the current stock price trades at a small fraction of the reserves behind the share price. Once the market understands that the debt is not an issue (or that management has a viable plan for the issue), then this stock price should soar.

Management has perhaps used more of the credit line than many would prefer. But the purchase price of the Northwest shelf was not entirely determined by production or even with the addition of current production reserves. At least some of the value of the properties was future potential. Therefore, the low costs and the evolving low costs of the Northwest Shelf most likely mean that, even under some hostile conditions, this company will survive the 6-month bank credit limit redeterminations. Finances here are not as much of a worry as some other companies I follow.

I analyze oil and gas companies like Ring Energy and related companies in my service, Oil & Gas Value Research, where I look for undervalued names in the oil and gas space. I break down everything you need to know about these companies – the balance sheet, competitive position and development prospects. This article is an example of what I do. But for Oil & Gas Value Research members, they get it first and they get analysis on some companies that is not published on the free site. Interested? Sign up here for a free two-week trial.

Disclosure: I am/we are long REI. I wrote this article myself, and it expresses my own opinions. I am not receiving compensation for it (other than from Seeking Alpha). I have no business relationship with any company whose stock is mentioned in this article.

Additional disclosure: Disclaimer: I am not an investment advisor, and this article is not meant to be a recommendation of the purchase or sale of stock. Investors are advised to review all company documents and press releases to see if the company fits their own investment qualifications.

Previous PostSix Charts on Myanmar’s Economy in the Time of COVID-19Next PostPublic Forums & The First Amendment: Can Streets Be Painted With ‘Black Lives Matter’ Messaging?