Over the past few days, we have seen U.S. stocks surge back to near all-time highs despite a dip in long-term breakeven inflation expectations, marking a near-term blip in the strong positive correlation in place since March. Our best guess is that investors appear to be expecting reduced prospects of fiscal stimulus under a Biden Presidency and a Republican Senate, depressing inflation expectations and bond yields, and more money printing from the Fed, lifting stocks.

This goldilocks reaction is unlikely to last and we think this provides an opportunity to sell U.S. stocks and position for rising inflation in the ProShares Inflation Expectations ETF (RINF). The RINF offers all the upside potential from increased money printing with fewer downside risks in the event of contracting U.S. equity valuations.

The RINF tracks an index with long exposure to 30-year U.S. TIPS and short exposure to 30-year U.S. Treasuries, gaining when yields on Treasuries increase relative to those on TIPS. The ETF therefore tracks investor expectations of long-term consumer price inflation. We first recommended the ETF back in April (see ‘Inflation Expectations Are Way Underpriced‘) and since then it is up 15% having risen alongside stocks, albeit in much less volatile fashion.

As we explained here, there are only two ways in which money printing supports stocks: firstly by lowering real yields thus raising the present value of future cashflows, and secondly by raising the general price level which allows nominal earnings and dividends to rise faster. With nominal yields already so low, any decline in real yields would likely be driven by rising inflation expectations. This means that if stocks are to continue rising, it is highly likely that the RINF will also rise.

Over the longer term we expect the close correlation between U.S. stocks and inflation expectations to break down as inflation pressures rise and undermine equity valuations. Long-term inflation pressures are building as a result of prior fiscal and monetary expansion. Furthermore, while a Republican Senate may stymie Democrat fiscal expansion plans, we would still expect to see significantly higher government spending under Biden relative to Trump, undermining long-term real GDP growth and lifting inflation.

Any positive impact on U.S. stocks from rising inflation would likely be more than offset by declining valuation multiples from current record highs. U.S. stocks have shown a very reliable tendency to decline in the face of rising inflation declining valuation multiples as outlined in ‘SP500: Low Bond Yields Do Not Justify High Equity Valuations’. The chart below shows the correlation between the cyclically-adjusted PE ratio and the 5-year average inflation rate. As inflation pressures have risen in the past, investors have driven up the required rate of return on stocks. 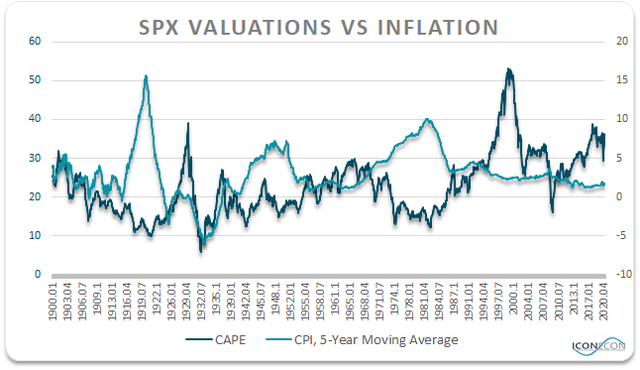 There are numerous explanations for this inverse correlation between inflation and equity valuations, one being that rising inflation increases uncertainty about the future. Another is that expansionary fiscal and monetary policies in the prior years create simultaneous inflation potential and extreme equity valuations. Policymakers tend to support asset values with expansionary policies at the expense of real wealth creation up until a point where rising inflation sends them a signal to engage in tighter policy. Either way, we would not bet on this time being different.

The main problem with the RINF is that unlike stocks it does not pay a dividend. However, the current yield on the SPX is just 1.7% and we expect dividend payments to gradually decline over the coming months and years after reaching their highest ever level relative to sales and GDP and undergoing a stratospheric rise in real terms. This process already appears to be happening with dividend payments peaking in June on a trailing 12-month basis. 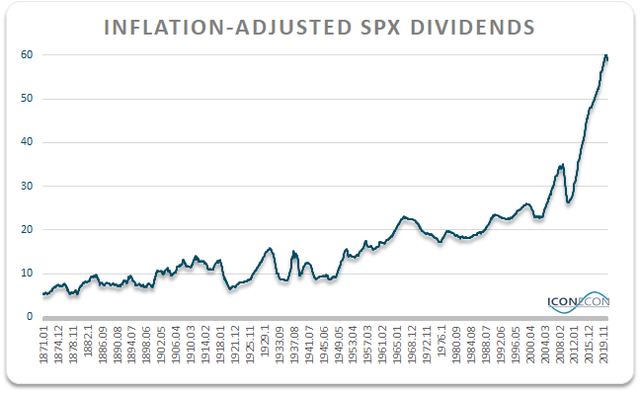 Disclosure: I am/we are long RINF. I wrote this article myself, and it expresses my own opinions. I am not receiving compensation for it (other than from Seeking Alpha). I have no business relationship with any company whose stock is mentioned in this article.