But with a leftist government in Argentina ramping up taxes on the rich while a new conservative administration in neighbouring Uruguay offers tax breaks to newcomers, many wealthy Argentines are choosing to move across the river Plate permanently.

“I don’t want to work for the next 15 years when I’m at the peak of my earning capacity in order to be able to enjoy my retirement, only to have to give it all back to the state,” said one Argentine executive in his fifties who relocated to a beachside villa near Punta del Este this year. “Uruguay is no tax haven . . . but Argentina is a money trap.”

One of the biggest causes of discontent is what many see as a confiscatory tax system. Congress is set to soon debate a one-off “solidarity” tax on Argentines with net assets of more than $3m that officials say could raise up to $4bn.

That is on top of an existing wealth tax that was raised in December to 2.25 per cent — higher than any other country except Spain. It increases the burden on taxpayers even further in what is already one of the world’s most heavily taxed countries.

It’s just unbelievable, impossible to understand, when this country needs investment like a desert needs rain

“They are shooting themselves in the foot,” said Luciano Laspina, an economist and a leading opposition lawmaker. As it is, Argentina’s endemic economic volatility explains why its citizens hold at least $300bn abroad, according to economists.

The new solidarity tax will only further undermine confidence in the new government, already shaken by such moves as a botched attempt to nationalise the country’s largest grains exporter and unexpectedly freezing telecoms tariffs, he argued.

“At a time when [foreign] companies are fleeing Argentina because of political uncertainty and economic crisis, they introduce an arbitrary tax arguing that this is an emergency. But Argentina has been in a [legal] state of emergency for the past 20 years . . . so [another tax] could come at any moment,” added Mr Laspina.

By contrast, a presidential decree aimed at boosting spacious Uruguay’s 3.5m population approved by congress in August makes it easier for foreigners to settle in the country, by cutting the value of property required for individuals to qualify for residency to $380,000, and the minimum investment for businesses to $1.7m.

The incentives also include a 10-year tax holiday and the requirement that newcomers spend just 60 days in Uruguay a year. About 20,000 Argentines have applied to relocate to Uruguay.

Despite widespread doubts on the effectiveness of taxes on wealth — especially when many economists argue that much more money could be raised by collecting existing taxes more efficiently and clamping down on chronic evasion — most rich Argentines are reluctant to criticise the new tax openly.

That reluctance stems from the state of the country’s economy, which has been stagnant for the past decade and is in its third year of recession. Now it is suffering from the fallout of the coronavirus crisis, made worse by one of the longest and strictest lockdowns in the world.

Fernanda Vallejos, an influential legislator for the ruling coalition, argues that there is no question about the need for a wealth tax in Argentina, especially given the economic havoc wreaked by the pandemic, with more than 40 per cent of Argentines now living in poverty.

“We’re talking about a universe of less than 10,000 people who benefited from the regressive policies of the previous government that allowed a tremendous concentration of wealth, while poverty and inequality increased scandalously,” she said.

Alfredo Serrano, a leftist economist and executive director of the Celag think-tank, admits that Argentina has “one of the most disorderly, extensive and varied tax systems in the world”, which requires root-and-branch reform, “but that’s not incompatible with measures to make it fairer . . . Changing the tax structure requires time, but this situation is urgent.”

Taxes in Argentina overall represent 28.4 per cent of gross domestic product, well below the OECD average of 34.3 per cent. But with just 8m of Argentina’s 45m population working in the private sector — compared with more than 20m who depend on the state, including public sector workers, pensioners and those receiving subsidies — the tax burden on many individuals and private companies is “completely confiscatory”, according to Matias Olivero Vila, a partner at Bruchou, Fernández Madero & Lombardi, a leading law firm in Buenos Aires. 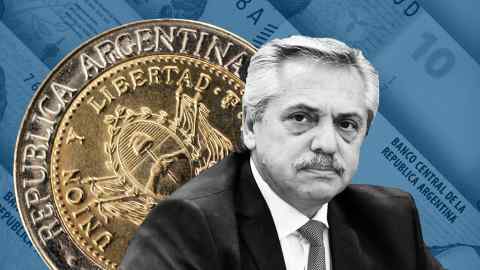 “As well as being [almost] the most heavily taxed country in the world, according to the World Bank, it also [already] has one of the highest wealth taxes in the world,” said Mr Olivero. Few other countries in the region with wealth taxes, including Uruguay and Colombia, are a fraction of the level in Argentina.

“It’s just unbelievable, impossible to understand, when this country needs investment like a desert needs rain,” he said.

Martin Castellano, Latin America economist at the Institute of International Finance, argued that the new tax would not be a “game-changer” from a fiscal standpoint, while it would add to doubts over the policy direction in Argentina.

“Instead, commitment to a multiyear agenda to address macroeconomic imbalances by tackling public spending and improving the business climate could help stabilise the economy and jump-start growth,” he said.