Ethanol producer REX American Resources (REX) released its earnings report for the fiscal quarter that ended on April 30 this week. The report reflected the dismal operating conditions that existed in the ethanol sector in March and April as coronavirus-induced lockdowns caused demand for gasoline and, by extension, ethanol to collapse. The company’s earnings report was closely watched by the rest of the sector due to the one month lag of its earnings schedule relative to other producers. Whereas most producers’ Q1 earnings reports only captured a few weeks’ worth of COVID-19 impacts, roughly half of the FQ1 earnings report from REX American Resources reflected these impacts.

Ethanol producers’ share prices, including those of peers Green Plains, Inc. (GPRE) and Pacific Ethanol (PEIX), fell by almost as much as that of REX American Resources following the release of the FQ1 earnings as investors realized just how bad the operating environment has been in recent months (see figure). In late April I wrote that ethanol share prices were becoming disconnected from operating conditions, and the market’s realization of this fact has caused the rally that began in April to falter.

REX American Resources reported a diluted EPS of -$1.21 on revenue of $83.3 million in FQ1. The corresponding results for FQ1 2019 were $0.45 and $104.6 million, respectively. The primary driver of the YoY decline by both results was a 21% reduction over the same period to ethanol sales. Ethanol production margins turned negative during the second half of the quarter (see figure) as the rapid decline of demand caused the ethanol price to drop relative to the price of corn. REX American Resources idled some of its production capacity in response, causing the sales shortfall and lower earnings. The company’s ethanol segment reported a gross profit of -$8.2 million in FQ1 2020 compared to $6.1 million in the prior-year quarter. 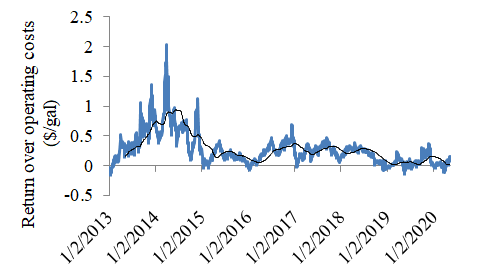 The poor earnings were exacerbated by the decline of the price of ethanol from $1.24/gallon at the beginning of the quarter to a low of $0.68/gallon in early April. The low average ethanol price caused REX American Resources to report a $9.1 million charge during the quarter due to the falling prices of ethanol and, to a lesser extent, corn. This impact was partially offset by the federal COVID-19 stimulus legislation, the “CARES Act”, which allows companies to carry losses back five years.

If the above earnings report from one of the sector’s higher-margin producers caused investors to dump shares across the entire sector, it also masked further evidence that REX American Resources remains in a strong financial position despite the diminished operating environment. The company reported an operating cash flow for the latest quarter that was only just negative at -$0.3 million compared to $1.5 million in the prior-year quarter. Amidst the most challenging operating environment since the 2012 Midwestern drought, in other words, the company still managed to almost cover its operating costs. It continued to have $164 million in cash and no debt at the end of FQ1, even as it took advantage of its low share price and repurchased another 108,706 shares during the quarter.

This strong financial position has also enabled REX American Resources to explore investments in new income streams. It was announced during the FQ1 earnings call that the company is in the preliminary stages of a carbon capture and sequestration project in collaboration with the University of Illinois Urbana-Champaign for the purpose of generating federal tax credits. The project, if it moves forward, will develop a carbon storage site near the company’s existing One Earth ethanol facility. (Presumably carbon dioxide will be captured from the ethanol facility’s fermentation vessels so as to enable the sequestration of biogenic carbon.) The company’s latest non-ethanol investment was in coal refining capacity, also for the purpose of generating tax credits, so a carbon sequestration investment would be well within its wheelhouse.

Furthermore, the ethanol sector’s operating environment is steadily recovering as lockdown orders are being lifted and gasoline demand has rebounded. The ethanol production margin as measured by Iowa State University’s Center for Agricultural and Rural Development has increased from its March low of -$0.12/gallon to $0.15/gallon in recent weeks. Ethanol production volumes have also started to increase (see figure) from April’s lows in response to improving demand from blenders (see second figure). While April’s poor margins will not be reflected by most ethanol producers’ earnings until the Q2 reports are released, they are firmly in the rear view mirror for REX American Resources. 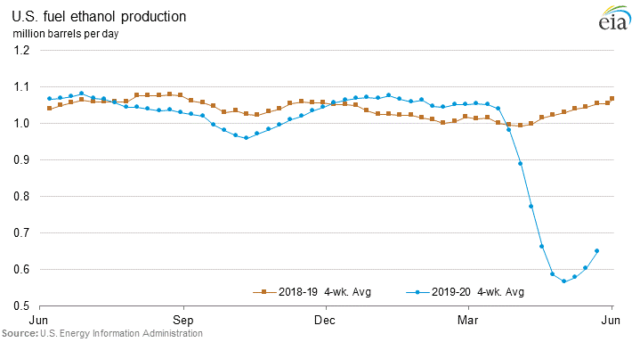 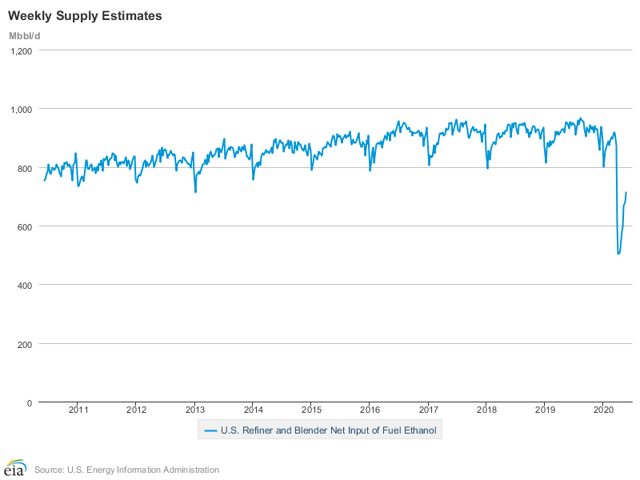 Finally, and most importantly, demand for biofuels has been increasing even beyond the volumes that are required to comply with the 2020 federal blending mandate. The price of D6 Renewable Identification Numbers [RIN], which is the category that corn ethanol qualifies for under the mandate, has experienced strong gains in 2020 to date (see figure). As I explained in my April Top Idea article on REX American Resources, ethanol demand can be expected to fully rebound by early 2021 due to the mechanism by which the mandate’s annual blending requirements are implemented. RINs can also be banked until the subsequent year, so blenders have an incentive to blend as much as possible now in order to secure RINs. D6 RINs have nearly tripled since the beginning of the year, and this trend can be expected to continue as the mandate’s 2021 volumes come into focus. 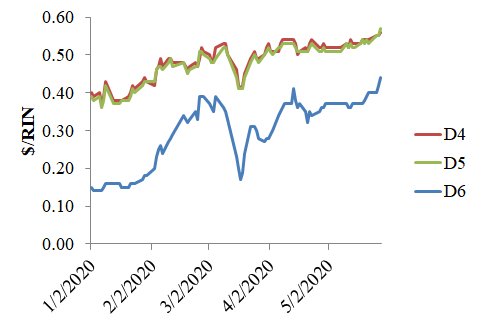 The long thesis for REX American Resources that I laid out in April remains intact for the above reasons, notwithstanding the major rally that its share price has experienced in the interim (see figure). While a second wave of the COVID-19 pandemic and, by extension, lockdown orders could cause the demand outlook to deteriorate by Q4 2020, any demand disruption would only last until the mandate’s 2021 requirements went into effect. In the meantime, there are numerous signs that the poor conditions that characterized March and April for REX American Resources are firmly in the past. I encourage investors to hold any long positions that were initiated in response to my Top Idea article for these reasons.

Disclosure: I am/we are long REX. I wrote this article myself, and it expresses my own opinions. I am not receiving compensation for it (other than from Seeking Alpha). I have no business relationship with any company whose stock is mentioned in this article.

Previous PostOPEC delivers three quarters of record oil cut in May: surveyNext PostUS spending falls by most on record in April