Revlon Is Bombed Out But Not Bust (NYSE:REV)

Revlon has (NYSE:REV) avoided a Chapter 11 filing this time around at least. The risk was that an issue of bonds due in February could not be rolled over – well, pretty certainly could not be – and therefore investors needed to take a haircut. Whether they would agree to do so meant that the Chapter 11 filing was at least being suggested and could even have happened.

The refinancing of those bonds – done by a massive haircut to bondholders – has happened and the immediate risk of bankruptcy has receded.

Revlon will avoid a bankruptcy filing that seemed imminent after entering into an exchange offer with bond holders, the cosmetics giant announced Thursday.

Under the deal, which is expected to close today, the company exchanged approximately $236 million of senior notes due in 2021, or approximately 68.8% of its aggregate outstanding principal amount, for either 32.5 cents on the dollar in cash or a combination of cash and new debt, Fashion Network reported.

This has obviously boosted the stock price: 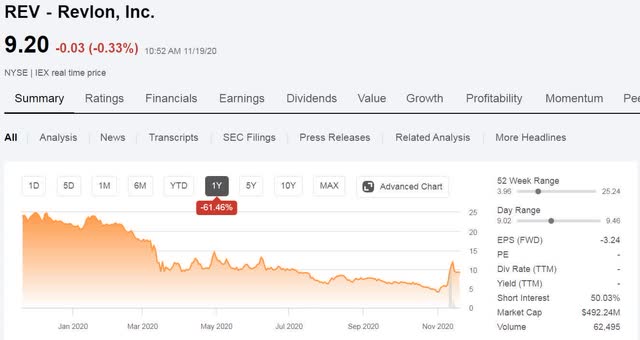 Although, as we can see, the price never did decline as much as we might expect from a stock facing immediate Chapter 11. It also didn’t rise as much as we’d think when it missed it and the past few days have seen a gentle decline again. That’s the bit that needs explaining here. Why hasn’t it leapt now that it’s free of the risk?

There’s a straight answer and then there’s an unkind but possibly truer one.

One answer is that, as Macro Polo Capital said a year back, there’s not much there. Yes, there are plenty of brands in there, all in much the same line of work of make up and other grooming products. But they’re all on that downward slide. To put it a little unkindly, they’ve had their day. This is colloquial you understand, not in the language of brand management. But new products start out as being, well, new, they’re different, better. They might well become a brand in that people associate them with the benefits of the product.

Some such brands are high value in the sense that people will pay premium prices for them. Cool, and very profitable that can be too. But there does tend to be a lifecycle to most brands. They start out exclusive and capable of demanding a high premium and over the years they decline in exclusivity to where they’re on the shelves at Target and Walmart. There’s nothing wrong with either store and, sure, branded products still command a premium over own brand goods there. But it’s not the same sort of premium as is associated with a brand at the peak of its exclusivity now, is it?

This is near-inevitable because the owner of the brand wishes to maximise profits. Profits are the combination of premium that can be commanded times the volume of sales that can be made. This usually means increasing volume which is, of course, the opposite of maintaining the exclusivity which allows the premium to be charged.

Thus brands do get “tired” or move a little down market over time. I’d argue that Revlon’s brands are largely on the lower slopes of the right side of the peak in this process. They’re, largely enough, getting close to commodity products not brands any more.

Yes, that second paragraph goes on to explain that the loss is as a result of COVID-19 and all that. But the pre-COVID-19 results weren’t all that exciting either. This just isn’t the ongoing performance of an exciting group of high-end brands.

That is, the base and underlying business just isn’t very interesting at present.

READ ALSO  Will inflation make a comeback as populations age?

The company has sorted out that bond issue. But why didn’t the stock decline more if Chapter 11 was mere moments away?

Because the equity value in Revlon is pretty much what Ron Perelman wants it to be. He owns the majority for a start. He also controls the finances of the firm more generally.

Thus, everyone knew that there wasn’t that real, real, risk of Chapter 11. Perelman would play Mexican chicken with bond holders and any move to Chapter 11 would have been because Perelman thought it more advantageous that it happen. If the holdouts held out for too much then he’d put it into administration. If they were willing to take the haircut he thought righteous then they’d save some value by it not happening.

That is, we’ve a controlling shareholder here who isn’t playing the same game as the rest of us equity holders – well, assuming we are holding equity. That’s why not so much excitement at the passing of the Chapter 11 risk.

If we were to be less unkind we’d go back to the first explanation. A set of tired brands still hamstrung by a significant debt load just isn’t all that exciting.

About the only possible excitement here is that Estee Lauder (NYSE:EL) might take Revlon out. There’s been – so far as anyone knows – no discussion and no news of it. But it does make sense in an industrial sense. Lauder could strip out most of the overhead leading to a very much better bottom line. Further, debt financing costs would be lower given the much larger and better balance sheet:

With a scrubbed balance sheet, Revlon could shine itself up for an auction. Lauder might even be a buyer. The $93 billion company has less than $5 billion in debt, about 1.5 times Refinitiv’s estimated EBITDA for the year ended in June 2021. If it paid a 25% premium, it could make a return of 8%, assuming Revlon’s operating income returns to 2019 levels. Vector in cost cuts of just 5% of Revlon’s overhead expenses and the return doubles. That would be one way to put lipstick on a venerable pig.

That’s extremely speculative and people have been speculating about it for over a year.

READ ALSO  Is This The Hottest Oil Play Of The Year?

There’s not much to get excited about here. OK, so it didn’t go bust. Yet. The public equity value is subject to what Ron Perelman decides he wants to do with his stake. A buyout could happen – it makes logical sense for a couple of buyers – but I doubt there would be a large premium as I can’t see a great deal of competition going on.

The business itself is a little sad and rather tired and I don’t see it reviving to throw off rivers of cash directly. There are better things to do with our money quite frankly.

The contrary view is that the end of COVID-19 will lead to a revival of the business. Or, alternatively, that more than one serious bidder appears so there is an auction driving the price up. Your estimation of the probability of either or both of those will colour your valuation.

“Look elsewhere” isn’t perhaps quite the exciting and event-driven analysis you want. But it’s what I think is the best advice to give here with Revlon. The presence of an overwhelmingly majority shareholder means outside equity holders are in possession of what is really just a stub. It’s not the outside shareholders who are anyone’s major interest.

The business itself isn’t very interesting; there’s not a great deal of change likely. There is that possibility of a buyout but I’d not expect that, even if it happened, to be at a great premium.

There are better places in the market to go look for both bull and bear cases. Do so rather than tying up capital here.