A surge in internet trading by China’s retail investors has boosted the country’s brokers, awarding some of them a valuation in line with the world’s best-known banks.

Average daily turnover on China’s stock market has hit Rmb874bn ($129bn) this year, according to data from Goldman Sachs, up nearly 60 per cent from the average of the past five years, as the coronavirus crisis has driven interest in online equity trading.

That has ignited shares in brokers, placing them among China’s best-performing stocks of the year. Shares in East Money, an internet trading group largely unknown outside China, have climbed by 84 per cent, giving the company a market capitalisation equivalent to $30.6bn — above that of Credit Suisse.

“The entire sector is going crazy . . . all the most expensive brokerage companies are in China,” said Hao Hong, head of research and chief strategist at securities firm Bocom International. East Money shares trade at a price-to-earnings ratio of 69, compared with 14 times for US broker Charles Schwab.

Brokers, including financial heavyweights such as Citic Securities and CSC Financial, have provided online services for mom and pop investors in China for several years, often with high-tech features such as facial recognition technology. Between them, these amateur investors make up more than 80 per cent of turnover on the country’s stock exchanges.

East Money, the best-performing big financial stock in China this year, derives revenue from its brokerage business and commissions on mutual fund sales, of which there were 76.8m in the first half. Over that period its revenues were Rmb3.3bn, up two-thirds compared with last year.

But the recent jump in turnover — prompted in part by coronavirus-related restrictions in the world’s second-biggest economy — comes with a new element: a parallel craze for mobile apps and financial platforms that allow investors to tap into market information and social networks.

Liu Jianshun, a Beijing-based retail investor, said he found a “sense of belonging” from debating stock prices on East Money’s chat platform, known as Guba. He uses Guba to try to “talk up stock prices” as well as complain about poor share performance or corporate governance issues.

“East Money has created a virtual platform that replaced the physical brokerage outlets that were once the main gathering place for investors,” said a vice-chairman at one of the company’s rivals.

Like elsewhere in the world — from the US to Russia — people in China have turned to the stock market at a time of rising uncertainty over other sources of income and employment due to Covid-19.

Chinese stock market turnover this year peaked in July when daily volumes exceeded Rmb1tn for 15 consecutive days, according to Goldman Sachs, as the CSI 300 index of Shanghai- and Shenzhen-listed shares reached its highest level for 2020. The benchmark is up 13.6 per cent this year.

“If they still have the income, they have nowhere to spend” it, said Kinger Lau, chief China equity strategist at Goldman Sachs. “They spend more time buying stuff online and spend more time . . . just trading stocks at home.”

“If you look at Yu’ebao interest rates over the past few months, it’s been falling pretty steadily,” he said. “They [retail investors] are more incentivised to put money into stocks”. 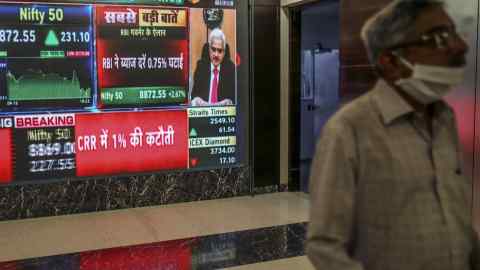 Huge demand for stocks among China’s retail investors has also yielded increased appetite for markets data. Hithink RoyalFlush Information Network, which has risen 42 per cent this year, provides investors with financial information and directs them towards brokers where they can access the market.

That same demand has charged China’s booming initial public offering markets. Shenzhen-listed shares of Contec Medical Systems closed up more than 1,000 per cent in its debut session last month after regulators relaxed rules on the city’s tech-focused ChiNext board.

While turnover has been high for stocks, the rise of East Money has also been supported by increased flows into mutual funds in China. Newly issued active equity mutual funds raised more than Rmb1tn so far this year from 22m investors, according to Z-Ben Advisors.

That trend has also benefited those amateur investors whose trading impulses are not purely speculative, such as Li Zilei, a Shanghai-based investor who uses East Money to buy mutual funds. “We don’t expect to make a quick fortune. We want to participate in the market and interact with other investors.”