The renminbi has already rallied hard after a tumultuous US election week, but analysts say it has further to climb with Joe Biden replacing Donald Trump in the White House.

The more lightly regulated offshore renminbi climbed 1.5 per cent last week — its biggest weekly rally in a year and one of the biggest on record — after results trickling out from the November 3 vote suggested Mr Biden would win the contest.

After the Democratic challenger’s victory was declared on Saturday, further gains may lie ahead.

“I think nearly all the volatility has been driven by the US election. It’s quite clear that a Biden White House would follow a much less aggressive stance on trade,” said Mansoor Mohi-uddin, chief economist at Bank of Singapore.

On the eve of the US election, implied overnight volatility in the offshore renminbi jumped to its highest ever level — a sign of intense nerves. On the day itself, the currency weakened dramatically on what seemed at one point like the prospect of Mr Trump winning re-election.

After the president won Florida, investors got spooked. The rush to buy dollars for safety briefly pushed the buck to a one-month high against the renminbi as the race showed a tighter than expected result.

Yet two days later, large banks were ready to jump back into bets on a rising Chinese currency. Both Deutsche Bank and Citigroup strategists wrote to clients on Friday to say it was time to re-establish long positions in the renminbi as the fog around the results of the US polls started to clear.

By Friday, the renminbi was trading at its strongest level since June 2018. The dollar ended the week at 6.59 against the offshore renminbi and 6.6080 against the more regulated onshore-traded currency.

The Chinese currency has gained more than 5 per cent this year against the dollar and analysts at large banks expect the move to go further before the end of 2020.

“For the renminbi, the new US president will be quite critical to assess trade war risks,” said Ken Cheung, chief Asian FX strategist at Mizuho.

The Chinese currency was rattled by the Trump presidency, which instigated a trade war between the US and China. But the possibility of a less combative approach under President-elect Biden is just one of several factors supporting its strength this year.

“Underpinning the yuan’s upward pressure is also the fact that China’s own domestic economy continues to recover faster than the rest of the world,” added Mr Mohi-uddin. 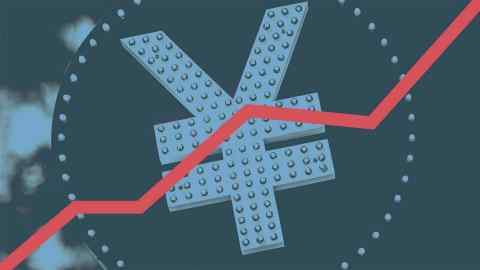 Foreign ownership of onshore bonds has hit a record high, and after a national holiday in October, the currency experienced its biggest one-day jump in 15 years.

Analysts also expect the People’s Bank of China to be more relaxed about the currency’s appreciation as their focus has turned to increasing the renminbi’s international use and boosting domestic demand. Lu Sun, a macro strategist at Citi, said the PBoC had shifted its preference towards higher exchange rate flexibility and allowing the currency to be more market driven.

“We think the renminbi can [strengthen] towards Rmb6.4 per dollar,” said Deutsche Bank’s macro strategists.