Khalifa Haftar, the renegade general seeking to control Libya, has announced his forces will lift an eight-month blockade on oilfields and ports to allow the resumption of production and exports from the North African state.

The announcement appears to be the result of a controversial agreement with Ahmed Maiteeg, a senior member of the UN-recognised Government of National Accord in Tripoli which Gen Haftar has been trying to unseat.

The Libyan conflict has morphed into a proxy war drawing in regional and international powers and Gen Haftar, who has a power base in the east and controls most oilfields and ports, has been under international pressure to lift the blockade. But analysts remain sceptical that crude will flow imminently from Libya.

Oil prices edged lower on Friday after Mr Haftar’s statement. Brent crude, the international oil benchmark, fell as much as 1.3 per cent to $42.79 a barrel after several days of gains following a cut to US production because of Hurricane Sally. It later recovered to $43.36.

Mr Maiteeg, the GNA deputy prime minister, issued a statement saying it “had been decided” to resume oil production and exports. He also posted on Twitter the text of an agreement setting up a joint committee to oversee production and the distribution of the oil revenue between east and west. The agreement does not refer to the foreign militias allied with Gen Haftar.

But even before the formal announcement, state-owned National Oil Corporation said it would not lift force majeure on exports until these foreign militias had left oil installations.

Mustafa Sanalla, the head of NOC, said it was regrettable that an “unauthorised party” was using oil as a “bargaining chip” to make political gains.

“We should not allow the mercenaries of Wagner to play a role in the national oil sector,” he said, referring to the Russian company whose mercenaries fight alongside Gen Haftar’s forces and are said to be present at oilfields and ports.

“We have more than fifty tanks filled with thousands of tonnes of hydrocarbons and flammable and explosive substances and we have foreign mercenaries inside these facilities,” said Mr Sanalla. “We cannot lift force majeure while they remain present.”

Wolfram Lacher, senior associate at the German Institute for International and Security Affairs, said Fayez al-Sarraj, the head of the GNA, did not appear to have been part of the agreement announced by his deputy. He predicted it would exacerbate divisions within the GNA and said it was “unlikely to fly”.

“This is a full capitulation to Haftar’s demands so it will be unacceptable to other forces in the west,” said Mr Lacher. “However, it places the GNA and NOC in the uncomfortable position in which they are the ones saying no to a resumption of oil production.”

The UN has been trying to negotiate an alternative arrangement that would allow the flow of oil and place the proceeds in a special account for a set period pending a political agreement between the two sides. 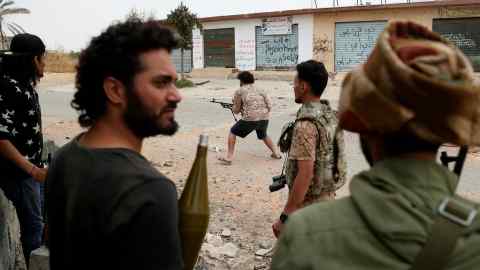 The general introduced the blockade to squeeze the western government’s finances after Turkey entered the conflict on the side of GNA. Gen Haftar, who failed earlier this year in a military offensive to seize Tripoli, receives weapons and support from the United Arab Emirates and Egypt. Thousands of Russian mercenaries bolster his firepower.

READ ALSO  Coca-Cola Is About To Break Out (NYSE:KO)

It is still unclear how quickly Libya could reach its pre-blockade production level of 1.2m barrels a day, up from about 106,000 b/d in August, according to third-party data from analysts and consultants supplied to Opec’s research arm.

The drop in oil production has only compounded a global crisis in the energy industry as prices have been hit by the fall in demand in the wake of measures to contain the coronavirus pandemic. Additional Libyan supplies would come into the oil market just as a nascent recovery in prices is faltering and as the pandemic continues to spur concerns about consumption.