Third-quarter reports from my Community Bank portfolio have begun trickling in. We are now eight months into the lockdown and, while the economy seems to be improving, there is no end to masks and social distancing in sight. This is my first article in a series of four that will discuss the results of each of the nine banks. The portfolio has gained about seven percent since inception (February 6, 2019) but is down over eight percent year to date. This compares favorably with the First Trust Nasdaq ABA Community Bank ETF (QABA) Benchmark losses of 15% and 26%, but lags the Vanguard S&P ETF (VOO) which has posted gains of 17% and 8% during these periods. This article features one of my better performers, Katahdin Bankshares (OTCQX:KTHN), which has returned 12%, along with one of my worst, Parke Bancorp (PKBK) which is down a little over 20%. I also happen to personally own both stocks.

KTHN released their earnings on October 21 and it’s always nice to read the President’s Message from Mr. Jon J. Prescott. It is always entertaining and informative. Unfortunately, it is evident the pandemic is still in full force.

Past due and non-performing loan numbers remain low; however, loan deferrals and extensions due to COVID-19 must also be factored in. As of September 30, total loans that have been deferred and have yet to resume their newly scheduled payments totaled $35.8 million, or 5.1% of total loans (excluding PPP loans). Most of the deferrals come from the hotel/motel industry, with the remainder well-diversified among many industry classes. The number of total relationships is manageable, and our staff is following the affected relationships very closely. While we have added $1,010,000 to the Reserve for Loan Loss this year, up from $325,000 at this time in 2019, additional funding may be necessary if credit deteriorates. However, at this time management feels the Reserve is adequately funded.

…we continue to limit open access to all our branches. Lobbies are available with call-ahead banking or by appointment.

I live in Alabama and both banks I frequent have offered full services (Lobby and Drive-Through) for several months and all the restaurants and service places in my town are open as well. I guess I didn’t realize how much impact the pandemic was still having in some places.

Regardless, let’s look at the performance. Table 1 displays the 3rd Quarter and Year to Date financials.

Obviously, the first thing we look at during these times is loan quality. An additional $200 million was added to loss provisions during the quarter and, as stated above, a full $35 million of loans is still in deferral. But with shareholder equity totaling $70 million, the bank is by no means in any trouble. Also, the Payroll Protection Program has provided the bank with $73 million in new loans and $519,000 in fees (non-interest income) during the year.

Net Income and Earnings were solid, with this year’s results on pace to surpass 2019. Dividend payout is exceptionally low, less than 20%, which should allow an increase next year. Tangible Book Value, ROA, and ROE have all risen nicely, with ROA and ROE almost back to pre-pandemic values. A three percent Net Interest Margin is impressive in this era of low rates (average of 2.89% in Second Quarter). The Loan to Deposit Ratio has remained remarkably constant through the years, which leads me to Figure 1: 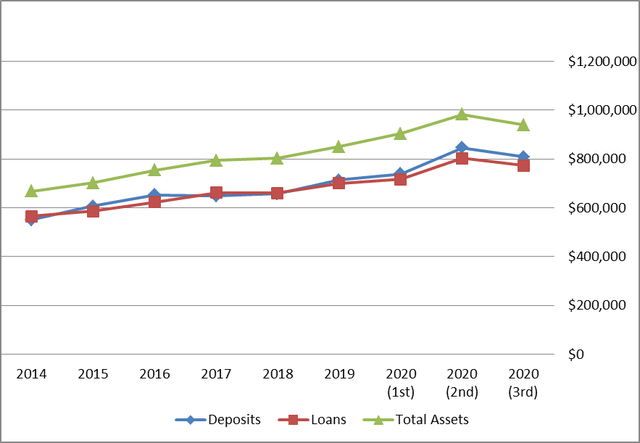 As the spreadsheet and figure show, there has been a nice increase in Assets, Loans and Deposits since 2014 but they are all down about 4% since the second quarter. This is not unexpected with the bank’s strategy and is explained very nicely by Mr. Prescott in the report. In a tribute to brevity, I will leave to the reader to pursue this in the quarterly report if they desire.

The economy remains in a precarious position due to the continued pandemic. …We are beginning to see more loan activity and we are pleased that most loans with payment deferrals caused by COVID-19 are back to making their full monthly payments. …Our asset quality has improved as OREO was reduced by approximately $4 million to $567,000 as of September 30, 2020. Our loans past due 30 to 89 days also decreased by $1.1 million from December 31, 2019.

Table 2 provides the financials for PKBK.

The note from the President seemed a little more upbeat than last quarter, and rightly so. Although they did add $2.4 million to the loan losses, the ratios of Non-Performing Loans and Assets have decreased from last quarter. And, like other banks, they have received a nice windfall with the PPP, which accounts for $95.1 million in guaranteed loans and over $.5 million in fees.

I will mention that PKBK sold $30 million of 6.5% subordinate notes in the second quarter to strengthen its balance sheet but that will cost it about $487,500 per quarter ($1.95 million per year) or about 4 cents per quarter.

Earnings were down from last year due to the pandemic. The addition of Loan Loss reserves plus the subordinate notes will subtract about 30 cents per share this year and that would be enough to approximately equal last year’s performance. Ratios are still good; there isn’t a single one that concerns me. And to be consistent, Figure 2 shows the Loans, Deposits, and Assets for PKBK. 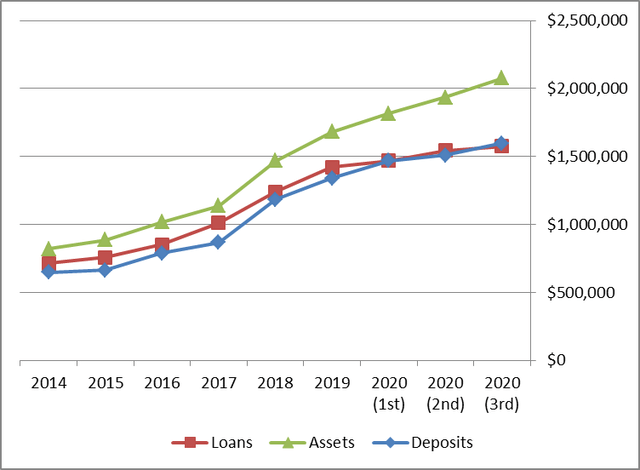 Like KTHN, all three of the categories have shown a nice increase since 2014 and the Loan/Deposit ratio has settled to around 1.

So what does this mean and what are the banks worth? The market seems to like both sets of numbers as KTHN is up four percent while PKBK has risen one and a half percent since release. I am confident both of the banks are sound and neither will go away anytime soon. That being said, I am much more confident in KTHN as it hasn’t needed an infusion of capital and has had a better year performance-wise.

As far as valuation, Table 5 displays my estimates using the 2nd quarter average regional bank P/B and P/E values of .8 and 10.43, respectively. It also shows what the banks were worth using the last quarter of 2019 (pre-pandemic) values; 1.32 and 10.91, respectively.

As evidenced by the Table, the old averages showed tightness between the valuations whereas the new do not. My guess is that many of the banks in the regional universe have reported very small earnings, which would mean an astronomical P/E, therefore driving the overall average up. A median figure would be more useful but I have not been able to find that.

So, assuming the market eventually returns to prior valuations, both of these banks are at the low end of their worth. Although I think KTHN is the preferred stock if one had to choose, I remain Neutral on both banks and recommend holding any shares you have.

Disclosure: I am/we are long KTHN, PKBK. I wrote this article myself, and it expresses my own opinions. I am not receiving compensation for it (other than from Seeking Alpha). I have no business relationship with any company whose stock is mentioned in this article.