In order to have a diversified portfolio, it’s usually recommended to have stocks in each of the main sectors. However, I’ve found consumer staples a tough area to find value in.

I got into Archer-Daniels-Midland (ADM) at a reasonable price and that’s been a solid holding in terms of dividends, if not price accumulation. I’m looking for another and in a recent glance at valuations, I noticed Reckitt Benckiser (OTCPK:RBGPF).

The British firm is famous for making all sorts of staple products: Dettol antiseptics, Durex condoms, Enfa infant formulas, Veet and more. A new CEO has taken charge with a transformative agenda to inject growth.

Let’s take a closer look and see its investment credentials. 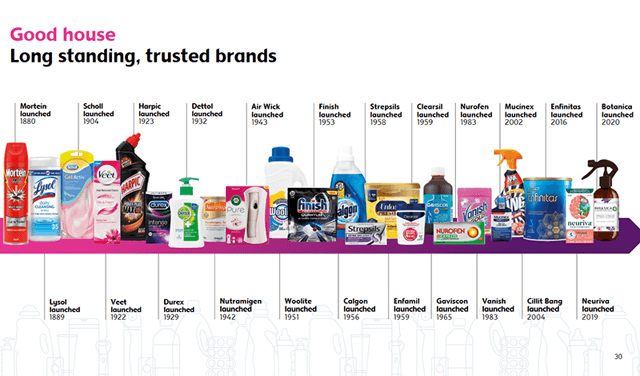 Reckitt & Sons and Benckiser combined in 1999 when the former acquired the latter for $3.2 billion. After several acquisitions, the modern company boasts a strong portfolio of staple brands including Durex, Dettol, Enfamil, Harpic, Lysol, Scholl, Veet and Woolite.

RB is based in Slough (England) and employs approximately 40,000. The CEO since September 2019 is Laxman Narasimhan, who formerly worked at PepsiCo (PEP).

RB is due to announce 2020 Q1 earnings later this month. For 2019 Q4, the company reported quarterly revenue of £3.3 billion, and £12.8 billion in annual revenue. This represented meager like-for-like growth of 0.8%.

Overall, there was a full-year loss of £2.8 billion due to a £5 billion writedown on the value of infant formula maker Mead Johnson. Adjusted EPS amounted to £3.49.

There were other negative headlines in 2019. In July, the company reached a $1.4 billion settlement with the Department of Justice after an investigation into former subsidiary Indivior. The British pharma company, which split from RB in 2014, was charged “with fraudulent marketing of its treatment for people addicted to opioids” according to The Guardian. Reckitt Benckiser denied any wrongdoing.

Reckitt Benckiser’s greatest strength is its array of famous brands that generally lead their fields.

RB’s portfolio is both an asset and liability. While the selection gives the firm strength in diversity, it can also make the structure unwieldy. To combat this, management has continued to refine the business segments in recent years. 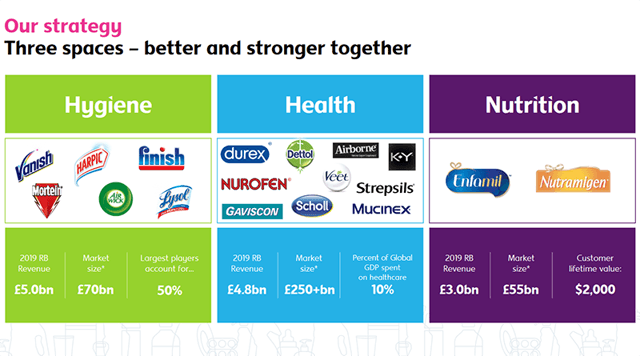 From 2020, the company will report three segments: Hygiene, Health and Nutrition. This should help organization in-house and provide more transparency for investors.

The COVID-19 crisis is affecting companies around the world in various ways.

In sectors like retail, entertainment and travel, it can be ruinous and we have already seen enterprises struggle. There are also firms that cannot keep up with demand like Amazon (AMZN) and food outlets.

Reckitt Benckiser falls somewhere in the middle. While the social distancing regulations could have an effect on the supply chain, its products will be required by many in the coming months.

As I’m sure you are aware, there is a boom in the sales of hand sanitizers and antiseptic wipes. CNBC reported that there was a 255% jump in hand sanitizer sales in the UK in February. In the United States, meanwhile, demand spiked by 1,400% between December and January!

Dettol and Lysol, RB’s antiseptic brands, have announced “unprecedented demand” and that’s likely to continue for some time. The company may also have an advantage over competitors.

Reuters reported in March that Reckitt Benckiser had “obtained a strain of the novel coronavirus, known as SARS-CoV-2, from an independent lab…to test whether its products kill the virus.”

If RB’s current lineup of products kills COVID-19, or it can manufacture suitable ones quickly, sales will clearly benefit.

What To Do With Mead Johnson? 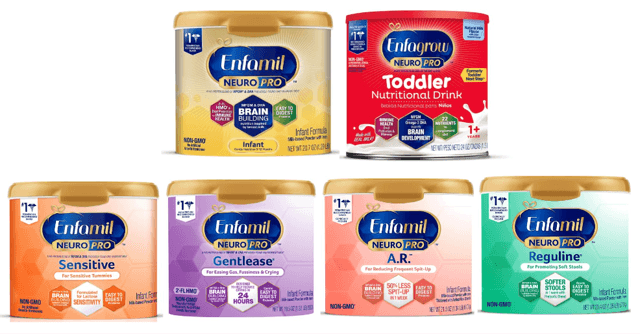 With just a month shy of three years since RB acquired Mead Johnson, it’s clear that the $16.6-billion deal hasn’t gone as planned.

At the time, former CEO Rakesh Kapoor hoped that “By combining the best of RB’s global scale with MJN’s science-based innovation, RB is well-positioned to deliver further value for all stakeholders.” While the company received the scale it desired, expected growth hasn’t followed.

As mentioned earlier, management wrote £5 billion of the value of Mead Johnson last year as projections weakened. In the 2019 full-year release, reasons for the reconsideration were given:

The most significant changes, evident over the last year, have been in the China market. The prospects for market growth have lowered, as a sustained materially lower birth rate has become likely. In addition, the competitive dynamics have changed with evolving regulation and the progress of a number of local competitors. We have also revised our view on the optimum long-term design of the supply network for the business as a whole. This will be more capital intensive than we had expected.”

In terms of figures, annual revenue growth projections have fallen from a range of 3-6% to 2-4%. While gross margin improvement is expected to be much lower than forecast at 2-4% rather than 4-9%.

Bloomberg’s Andrea Felsted was fairly damning in her analysis of the situation, writing that the deal now “looks like a colossal waste of money” and that Mead Johnson “might be for sale at the right price.”

In an interview with the Financial Times, CEO Laxman Narasimhan maintained that Mead Johnson is a “good business…[but] conditions have changed.”

One of Narasimhan’s biggest challenges is reinvigorating Reckitt Benckiser, particularly its health business.

In 2019, the segment declined by -1% with various issues for Dettol, Durex, Scholl and over-the-counter products. This appears to be part of a broader trend of stagnation. In the Financial Times, Morgan Stanley (NYSE:MS) claimed that RB had “missed analyst’s expectations in 13 of the past 14 quarters.”

In the 2019 Annual Report, Narasimhan was refreshingly blunt about the company’s failings:

We have to recognise that many of the issues we have faced in recent years have been driven by poor execution rather than structural changes in our industry. At the top line, we’ve had real issues delivering growth, particularly in health…Health has faltered. It became large, unwieldy and unfocused.”

After conducting a strategic review, Narasimhan has concocted a plan with a long-term goal of annual revenue growth in the mid-single digits and EPS growth between 7-9%. 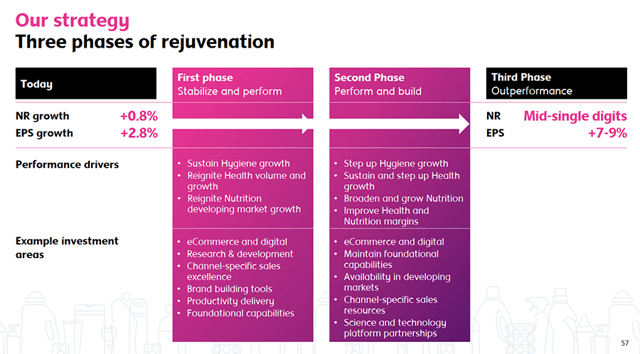 He wants to maintain strong profit margins while injecting £2 billion into growth initiatives. Narasimhan’s tagline is “we have a good house, in a great neighborhood with the potential to be a great house again.”

It’s clear that he has a big task ahead of him. 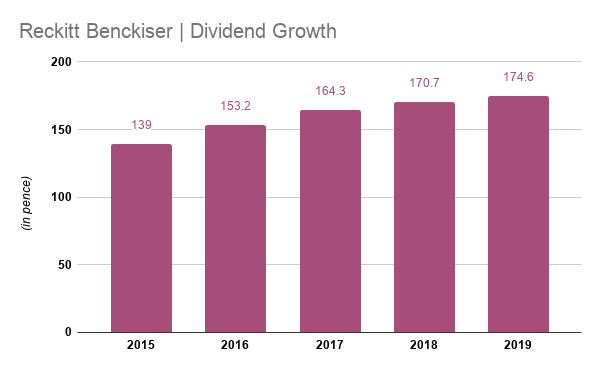 Using 2019 adjusted earnings, the trailing payout ratio is 50%. We can also look at this through cash flow. From operating cash of £3.4 billion in 2019, dividends paid amounted to £1.2 billion or 35%. However, when judged against free cash flow, that ratio rises to 57%.

As management pushes to inject more cash into resurrecting the business, it has decided to “sustain [the] dividend pay-out at the 2019 sterling level” until coverage reaches two. 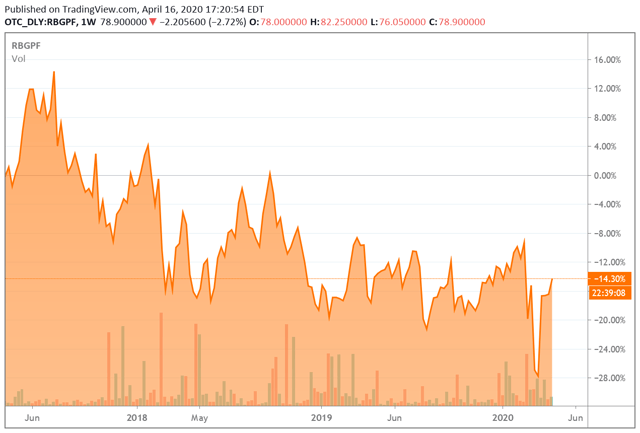 Adjusted 2019 earnings for RB were £3.49 per share which gives us a trailing price-to-earnings ratio of 18. This compares favorably with consumer staple peers like Unilever (NYSE:UL) (21) and Procter & Gamble (NYSE:PG) (24).

Consensus estimates for 2020 predict EPS of £2.91 or a forward P/E of almost 22. However, given the current crisis, we’ll just have to wait and see how the results actually turn out.

I’m on the lookout for a solid consumer staple and Reckitt Benckiser is an interesting candidate.

In its favor, RB has an arsenal of excellent brands, stable dividend and solid credit ratings (A- by S&P/A3 by Moody’s). On the other hand, there are issues with Mead Johnson and the stagnant health segment.

RB has a reasonable valuation but it’s clearly in a transitional phase. CEO Laxman Narasimhan has a difficult job ahead to inject growth and it will be interesting to watch his progress.

Reckitt Benckiser is certainly a company I will monitor and may invest in going forward.