Realty Income’s Time In The Sun Has Ended (NYSE:O)

To make it into the REIT Wealth Builder model portfolio a company must be both quality and trading at an attractive valuation. Frankly, Realty Income comes up short in both regards. I anticipate significant pushback from readers on the idea that O is not a quality REIT, but I implore you to read this with an open mind.

While Realty Income (O) has generally been a great investment over the past couple decades, I find it unattractive going forward. There are three specific concerns which in aggregate make me bearish on this triple net lease REIT.

2) Overly exposed to a rough sector

Over the years there has been a phenomenal discourse here on Seeking Alpha between the bulls and the bears on Realty Income (O). For years the bears have cited valuation as a problem with the high P/FFO multiple suggesting O is overvalued relative to triple net peers. The bulls flipped this argument by suggesting the high market price means O has a low cost of capital which makes their acquisitions more accretive. In the process I think people have become overly focused on spreads and not focused enough on absolute return on acquisitions.

In the past, my criticism of O as a stock has largely been on valuation. Today, however, there are real fundamental problems in addition to a still somewhat high valuation.

Failure to adapt to a changing world

As a large company with such a successful track record there’s a tendency to stick with the script. It has worked for decades so why not keep doing it?

Well, O may not have changed, but the world has. Here’s a slide from O’s presentation showing their acquisitions over the past 10 years.

So as compared to 2010, O’s acquisitions are lower returning with shorter contracts, lower quality tenants, and worse property types.

Rinse and repeat does not work when the situation changes. O has failed to adapt to the changing world and it would be a big mistake to assume that their former successes will repeat.

Cap rates declining is not really O’s fault. That’s largely a result of low interest rates in general and is true across almost all sectors of the economy. More concerning to me is that O is increasingly leaning toward retail as retail fundamentals have deteriorated. As it stands today, O’s portfolio is a whopping 84% retail.

The news likes to talk about work from home killing offices and low commodity prices killing agriculture, but both of those sectors have continued to pay rent quite reliably.

At a broad real estate level, industrial and office tenants have largely paid rent and the same holds true in O’s portfolio. 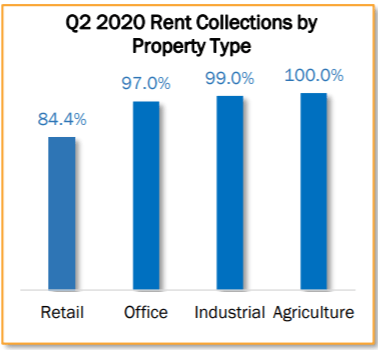 However that low payment rate of 84.4% coming from retail represents almost all of O’s portfolio which means a substantial portion of O’s contracted rent has gone unpaid.

There’s no doubt that triple net free standing retail is better positioned than malls and it’s probably even slightly ahead of shopping centers, but it’s still retail. The sector was struggling pre COVID-19 with so much of the tenant base losing market share to e-commerce and the pandemic has accelerated the transition.

Certain types of retail like pharmacies and various services are not being harmed by e-commerce, but the fact that so many of the potential tenants for retail space are being harmed reduces rental rates for the properties. Thus, even though Walgreens remains open and unharmed, it will likely be able to negotiate lower rent when its lease expires.

That does not mean it’s uninvestable, but it does mean that investors should apply a healthy discount in order to make up for the enhanced risk. At about 18X forward AFFO (adjusted funds from operations), O is not outrageously expensive. From a cash flow yield standpoint it’s cheaper than most of the S&P and about in line with most REITs. But let me ask you this. Is a valuation that is in-line with other REITs appropriate for a company like O that has 84% retail exposure?

Other retail REITs trade closer to 10-15X and that, in my opinion, is where they belong. A significant discount to compensate for the significant risk.

O has this perceived aura of impunity that comes from its track record of phenomenal success. The faith of investors is further bolstered by the CEO referencing the dividend as “sacrosanct.”

Please consider this article as a friendly warning that now might be the time to take the profits and find greener pastures. I would urge O investors to look forward rather than backward. The next 20 years are not going to look like the previous 20 years because the fundamental backdrop has changed. O is acquiring worse properties with worse tenants at lower rates of return.

This brings me to my final criticism of O’s business model as it stands today.

REIT people use the term cap rate and it basically just means the annual cash return on investment or if you want to be technical its net operating income divided by purchase price.

READ ALSO  Microbiology - Viruses hitch lifts on some bacteria, the better to kill others | Science & technology

From a buyer’s point of view, high cap rates are good because it means a higher return on investment.

Over the past few years, cap rates have fallen significantly across most property sectors. They tend to work as a spread over Treasury yields, so as interest rates dropped, cap rates generally followed.

To a large extent the declining cap rates were balanced out by a reduced cost of capital. REITs now have access to extremely cheap debt so they are financing the lower cap rate acquisitions with lower cost debt thereby maintaining spreads.

Triple net REITs work largely by capturing a spread between return on investments and cost of capital. The larger the spread, the more new acquisitions benefit the bottom line. In buying $100mm of properties at an 8% cap rate with a blended (equity and debt) cost of capital of 6% the REIT gets incremental profits of $2mm annually (2% spread X $100mm).

Today, that has largely shifted into $100mm of properties at a 6% cap rate financed with a 4% blended cost of capital. Since the spread is still 2%, the incremental profits are still $2mm annually.

A few examples might make it clear as to why.

Over long periods of time, rental rates tend to rise. It has been true for centuries and I see no reason why it would not be the case in the future. Let us examine how rising rental rates are affected by going in cap rates.

Both acquisitions start with incremental profits of $2mm annually on a $100mm acquisition, but if rental rates go up 10% the higher cap rate purchase benefits more. A 10% rise in rent increases the rent of the 8% cap rate purchase by $0.8mm. The net annual profit is now $2.8mm. The same 10% rise in rent would only increase the 6% cap rate purchase by $0.6mm making its new profit now $2.6mm. So while the spreads were initially equal, rising rental rates disproportionately benefit higher cap rate acquisitions. The reason is fairly straight forward. When buying at higher cap rates, one gets more rent for each dollar invested. The same thing goes for implied cap rates of REITs. When investors buy REITs at discounted multiples, each percentage point of growth is more beneficial to the investor.

Cost of capital is not a permanent feature of a particular REIT. It’s not the case that O just inherently has a lower cost of capital than other triple net REITs.

Another way in which the 8% cap rate 6% cost of capital REIT wins is that it’s looking increasingly likely that they will be able to reduce their cost of capital post hoc. The particular REIT may not have been able to access super low cost debt in the past but as it gets bigger and stronger that low cost of debt opens up. The debt portion of the capital structure can be refinanced. The expensive debt can be replaced with cheap debt bringing the cost of capital down to maybe 5% and suddenly that 8% cap rate has a 3% spread.

The same opportunity may not be available to O because there’s a soft cap on the lower bound. Since O already has extremely cheap debt there is less room to refinance accretively.

Many investors have had great returns investing in O, but based on the fundamental outlook, those returns are a thing of the past. Going forward, the business model just doesn’t look good. Investing in retail properties at low cap rates does not strike me as a winning strategy. It still has a great balance sheet and I suspect the dividend is stable, but the pace of dividend growth will slow to a crawl. In order to maintain the dividend aristocrat streak O may choose to raise the dividend by fractions of a penny each quarter, but financially the dividend growth looks negligible.

Perhaps now is a good time to harvest the historic gains on O and reinvest that capital into a better positioned triple net REIT. 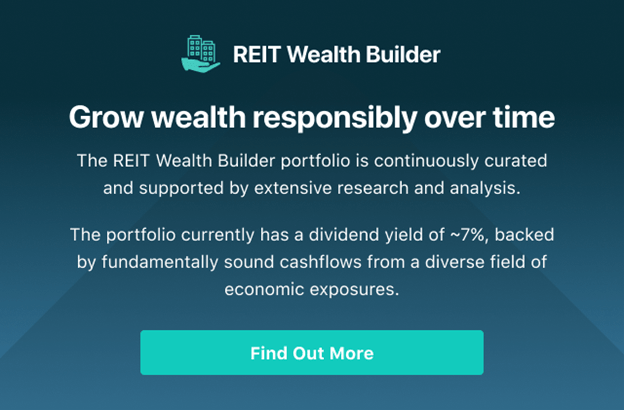 Disclosure: I/we have no positions in any stocks mentioned, and no plans to initiate any positions within the next 72 hours.

Additional disclosure: All content is published and provided as an information source for investors capable of making their own investment decisions. None of the information offered should be construed to be advice or a recommendation that any particular security, portfolio of securities, transaction, or investment strategy is suitable for any specific person. The information offered is impersonal and not tailored to the investment needs of any specific person. Please see our SA Disclosure Statement for our Full Disclaimer

Previous PostSE: Moderna CEO Hopes to Get Vaccine Approval in Next Few WeeksNext PostGlobal response is needed to prevent a debt crisis in Africa