Since May 2017, any dividend-paying stock mentioned in a message, e-mail or comment to the author is fair game for a reader favorite listing in this series of articles. Thus, it is possible that only rogues and discontinued, or dreadful, doubtful dividend issues may appear.

Lately, readers and other contributors have questioned the intent, purpose, validity, and usefulness of my daily stock lists. Most, however, praise the effort to sort promising opportunities out of the thousands of dividend offers. After all, yield counts when searching for dividend winners.

Furthermore, my dog catching is by method a contrarian investing strategy, and that can rub some investors the wrong way.

Most valuable to the writer, however, are those reader comments that truly catch errors in my calculations or changes in direction. Examples like the reader who misses my “safer” dividend follow-up articles because they contain dividend payout ratios. Those who catch flagrant fouled stock lists not synchronized with the data charted. This month readers scoffed at the high dividends attributed by both YCharts and Yahoo Finance to CVR Energy (CVI), an energy stock that cancelled its dividend, bpost (BPOSY), the Belgian postal service that skipped its March semi-annual payout, and Service Properties Trust (SVC), a REIT that scaled it quarterly payout back to $0.01. They’re at the bottom of this list by yield.

In June, two doubtful dividend dogs stood atop the yield list. The Oxford Lane Capital (OXLC) closed-end investment company sported a 40% dividend down to 19.57% this month, and Stellus Capital Investment Corp. (SCM) had converted to a Q-pay from a MoPay, but finally, on June 30, announced a $0.25/Q payout amount.

In my April S&P 500 Aristocrats dog article, I used the ticker O and its data for a listing labeled Emerson Electric, and also failed to catch the spin-off of OTIS and CARR from the newly minted RTX entity resulting from the merger of UTX and RTN, which were spotted thanks to readers’ sharp eyes. Another reader spotted airlines still listed among Warren Buffett’s Berkshire holdings due to my missing Warren’s offhand comments in his annual meeting in March. Editors once caught such gaffes before publication.

Note: I report current available numbers – no more, no less. Mine are first-glance snapshots of likely dividend prospects. In other cases, when I have credited dividends from sources that pay none, I beg mercy for my dependence on YCharts (my prime resource that persists in listing dividends for one year after cancellation is announced and implemented), but beware, Yahoo and Morningstar are no better and do the same.

Three months ago, I was also called out for including Consolidated Communications Holdings (CNSL) in a high yield list after it had announced a cancellation of dividends in April, and my failure to detect GameStop’s (GME) dividend death in June. Also, readers months ago noted Q Pay JMP. In July, I was again called out for including Carlisle Companies Inc. (CSL) as a dividend payer in one list or another, all of which were attributable to the aforementioned YCharts policy. Recently, YCharts has begun to flag nonexistent forward dividends on its charts.

My ongoing gaffe confusing volatility with risk in my beta reports was detected in May 2019 and persisted until this May, too. Yet another reader recently thought volatility was a better beta label. I’m now describing beta as risk/volatility.

YCharts responded with the following information when I complained about cancelled dividends remaining alive and listed for a full year after their demise: “We allow a dividend yield to persist for 365 days after the most recent reported dividend if a dividend is cut. Hence, this data should not be used for backtesting purposes. For true historical testing purposes, one would need the date the company announced a cut or increase in the dividend to get the proper expected dividend yield as of a given date.”

Below are 50 tangible results for the reader favorite and rogue equities and from July 5 to August 7. YCharts data for this article was collected as of 8/11/20.

Three reader favorite top yield stocks were verified as being among the top 10 gainers for the coming year based on analyst 1-year target prices. (They are tinted gray in the chart below.) Thus, this yield-based forecast for the reader favourite stocks, as graded by Wall Street wizards, was deemed 30% accurate by Wall Street estimates.

The following probable profit-generating trades were identified by projections based on estimated dividend returns from $1k invested in each of the highest-yielding stocks. That dividend and the median of aggregate 1-year analyst target prices, as reported by YCharts, created the 2020-21 data points.

KNOT Offshore Partners LP (KNOP) was projected to net $585.39 based on the median of target price estimates from two analysts plus dividends, less broker fees. The Beta number showed this estimate subject to risk/volatility 39% over the market as a whole.

Hough LNG Partners LP (HMLP) was projected to net $446.93 based on the median target price estimate from seven analysts plus dividends, less broker fees. The Beta number showed this estimate subject to risk/volatility 94% over the market as a whole.

Enterprise Partners LP (EPD) was projected to net $430.95 based on the median of target price estimates from twenty-three analysts plus the projected annual dividend, less broker fees. The Beta number showed this estimate subject to risk/volatility 41% more than the market as a whole.

Stellus Capital Investment Corp. netted $290.77 based on the median of target price estimates from six analysts plus dividends, less broker fees. The Beta number showed this estimate subject to risk/volatility 77% above the market as a whole.

Enbridge Inc. (ENB) was projected to net $268.34 based on the median of target price estimates from twenty-seven analysts plus dividends, less broker fees. The Beta number showed this estimate subject to risk/volatility 15% under the market as a whole.

BCE Inc. (BCE) was projected to net $241.98 based on the median of target price estimates from seventeen analysts plus dividends, less broker fees. The Beta number showed this estimate subject to risk/volatility 62% under the market as a whole.

Altria Group Inc (MO) was projected to net $206.51 based on the median of target price estimates from sixteen analysts plus dividends, less broker fees. The Beta number showed this estimate subject to risk/volatility 57% under the market as a whole.

AbbVie Inc. (ABBV) was projected to net $193.38 based on the median of target price estimates from eighteen analysts plus dividends, less broker fees. The Beta number showed this estimate subject to risk/volatility 17% under the market as a whole.

Federal Realty Investment Trust (FRT) netted $176.91 based on dividends plus the median of target price estimates from eighteen analysts, less broker fees. The Beta number showed this estimate subject to risk/volatility 15% under the market as a whole.

Exxon Mobil Corp. (XOM) was projected to net $172.58 based on the median of target estimates from twenty-four analysts plus annual dividend, less broker fees. The Beta number showed this estimate subject to risks 29% greater than the market as a whole.

Average net gain in dividend and price was estimated at 30.14% on $10k invested as $1k in each of these ten stocks. This gain estimate was subject to average risk/volatility 11% greater than the market as a whole. 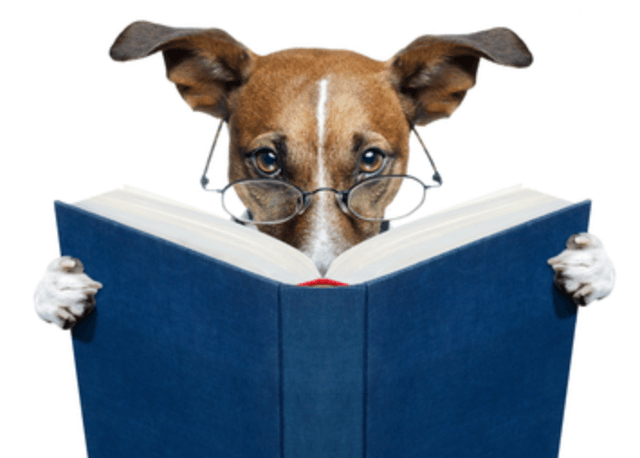 The “dog” moniker was earned by stocks exhibiting three traits: (1) paying reliable, repeating dividends, (2) their prices fell to where (3) yield (dividend/price) grew higher than their peers. So, the highest-yielding stocks in any collection have become affectionately known as “dogs”. More precisely, these are, in fact, best called “underdogs”.

Yield (dividend/price) results from YCharts verified by Yahoo Finance for ReFa/Ro stocks as of market closing prices 8/11/20 for 50 equities and funds revealed the actionable conclusions discussed below.

See any Dow 30 article for an explanation of the term “dogs” for stocks reported based on Michael B. O’Higgins book “Beating The Dow” (HarperCollins, 1991), now named Dogs of the Dow. O’Higgins’ system works to find bargains in any collection of dividend-paying stocks. Utilizing analysts’ price upside estimates expanded the stock universe to include popular growth equities, as desired. 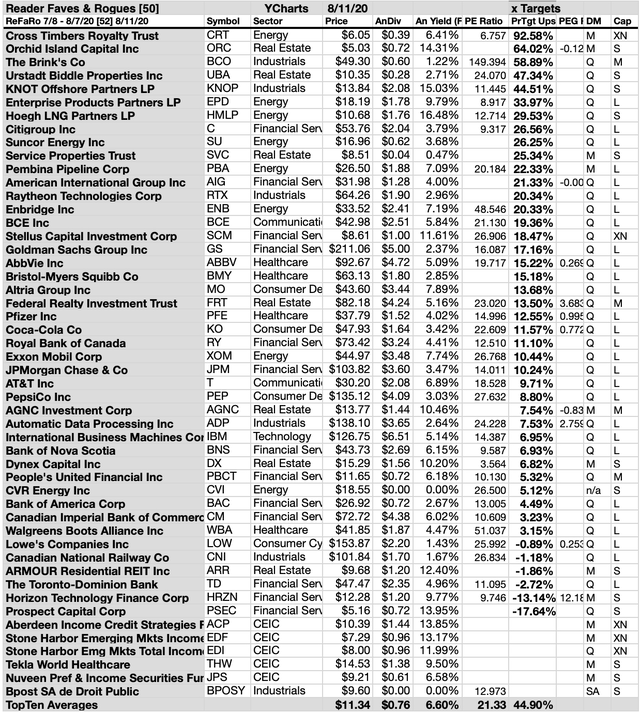 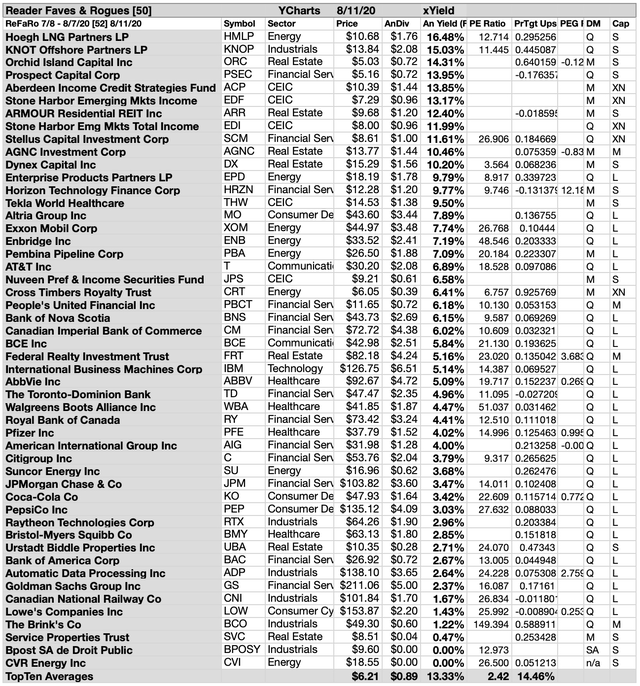 Of the leading ten by yield, the top reader mention was an energy sector member, as mentioned, Hoegh LNG Partners LP [1]. In second place was the lone industrials representative in the top ten, KNOT Offshore Partners LP [2]. 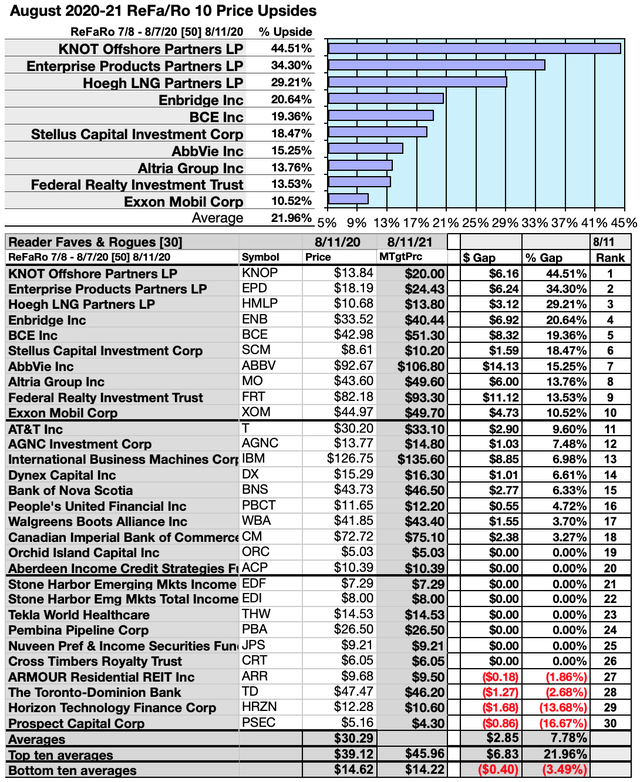 10 top ReFa/Ro were culled by yield for their monthly update. Yield (dividend/price) results verified by YCharts did the ranking.

$5k invested as $1k in each of the five lowest-priced stocks in the top 10 ReFa/Ro kennel by yield were predicted by analyst 1-year targets to deliver 39.5% less net gain than $5k invested in all 10. The tenth-lowest priced ReFa/Ro top-yield equity, KNOT Offshore Partners LP, was projected to deliver the best net gain of 58.54%. 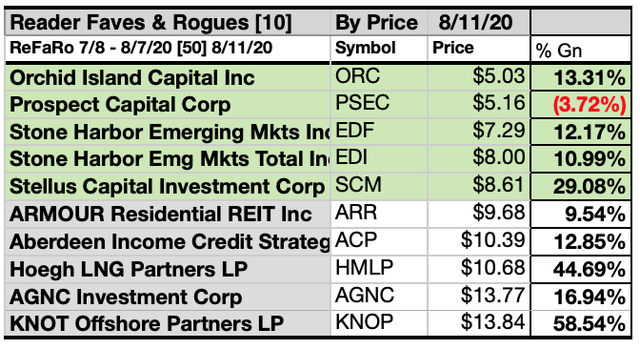 The distinction between five low-priced dividend dogs and the general field of 10 reflected Michael B. O’Higgins’ “basic method” for beating the Dow. The scale of projected gains based on analysts’ targets added a unique element of “market sentiment” gauging upside potential.

It provided a here-and-now equivalent of waiting a year to find out what might happen in the market. Caution is advised, since analysts are historically only 20-80% accurate on the direction of change and just 0-20% accurate on the degree of change.

Here is the full pack of 50 July ReFa/Ro 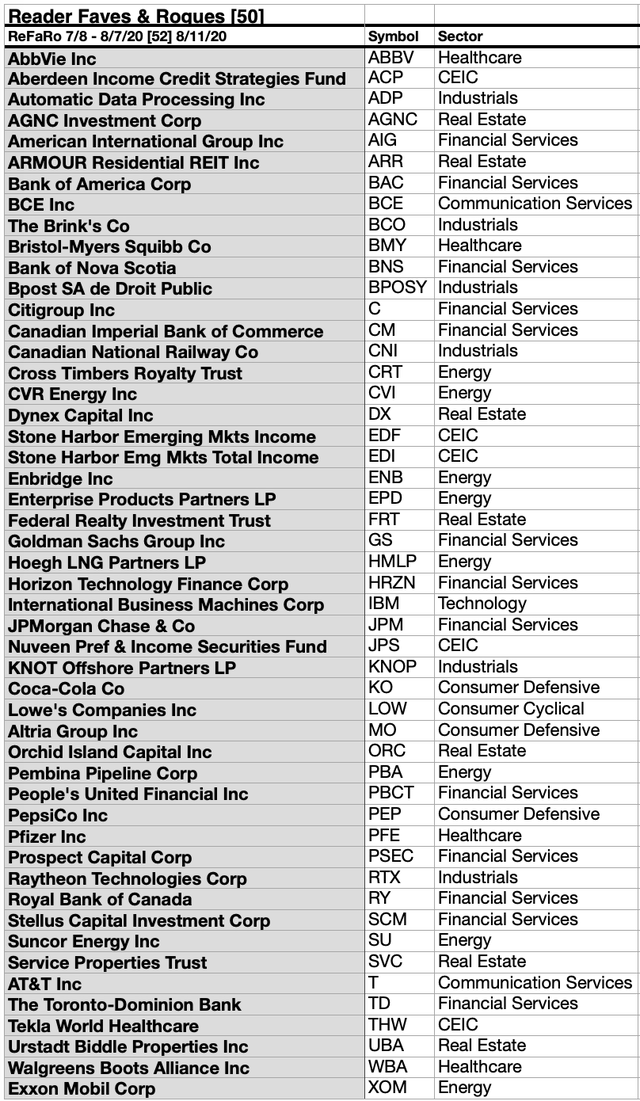 The net gain/loss estimates above did not factor in any foreign or domestic tax problems resulting from distributions. Consult your tax advisor regarding the source and consequences of “dividends” from any investment.

The stocks listed above were suggested only as possible reference points for your FoFave dog stock purchase or sale research process. These were not recommendations.

Disclaimer: This article is for informational and educational purposes only and should not be construed to constitute investment advice. Nothing contained herein shall constitute a solicitation, recommendation or endorsement to buy or sell any security. Prices and returns on equities in this article except as noted are listed without consideration of fees, commissions, taxes, penalties, or interest payable due to purchasing, holding, or selling same.

Click here to subscribe to The Dividend Dogcatcher. Get more information, the follow-up to this article, and a free two week trial.

Catch A Dog On Facebook At 8:45 AM every NYSE trade day on Facebook/Dividend Dog Catcher, A Fredrik Arnold live video highlights a portfolio candidate in the Underdog Daily Dividend Show!

Root for the Underdog. Comment below on any stock ticker to make it eligible for my next FA follower report.

Disclosure: I am/we are long PFE, T. I wrote this article myself, and it expresses my own opinions. I am not receiving compensation for it (other than from Seeking Alpha). I have no business relationship with any company whose stock is mentioned in this article.