The “rationalization” that low rates justify high valuations is but one of several arguments used to justify overpaying for value in a late-stage bull market.

As discussed previously, one of the “bullish spins” for the market has been that “earnings are cheap” based on 2- and even 3-year forward estimates. As noted in “Justifiable Bullishness Or Is It Willful Blindness?“:

“In 2020, investors are again chasing “growth at any price” and rationalizing overpaying for growth. Such makes the mantra of using 24-month estimates to justify paying exceedingly high valuations today, even riskier.” 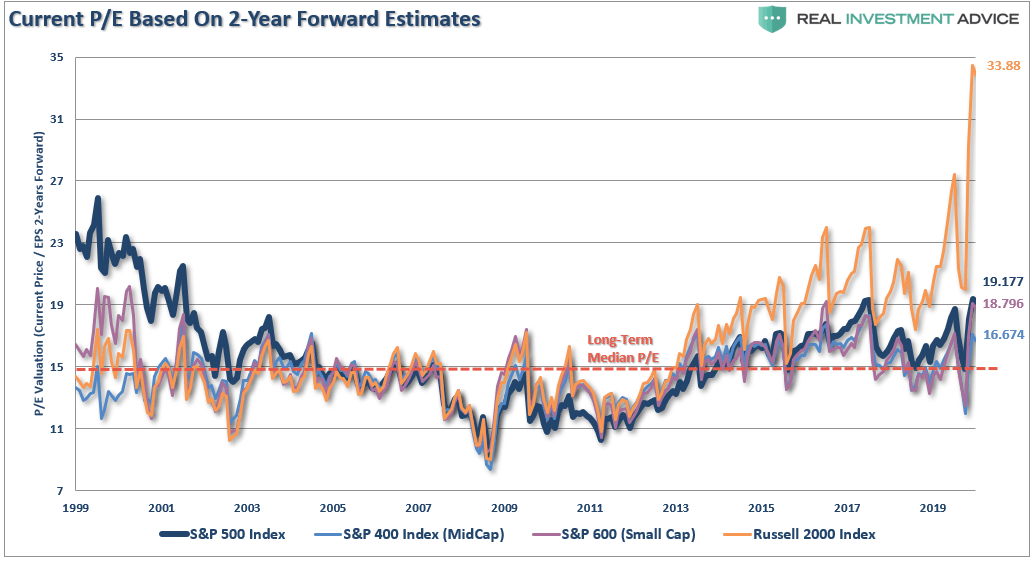 Such is also why there is the most significant disparity between growth and value on record.

This Time Is Different

The belief that this time is different from the past has always been the most dangerous of phrases for investors. However, this is where participants exist today. While it is true the excessive monetary liquidity has certainly changed short-term market dynamics, there is no evidence that it has mitigated long-term consequences.

Moreover, investors are also relying on the belief that low interest rates justify overpaying for earnings and sales.

“Valuations don’t matter as much as they did in the past because ‘this time is different’ in that interest rates are so low.”

The basic premise of the interest rate/valuation argument has its roots in the “Fed Model” as promoted by Alan Greenspan during his tenure as Federal Reserve Chairman.

The Fed Model states that when the earnings yield on stocks (earnings divided by price) is higher than the Treasury yield, you invest in stocks, and vice-versa. In other words, disregard valuations and buy yield.

There is a critical disconnect that needs to be understood.

You receive the income from owning a Treasury bond. However, there is no tangible return from the earnings yield.

For example, if I own a Treasury bond with a 1% coupon and a stock with a 2% earnings yield, if the price of both assets doesn’t move for one year – my net return on the bond is 1%, while the net return on the stock is 0%. 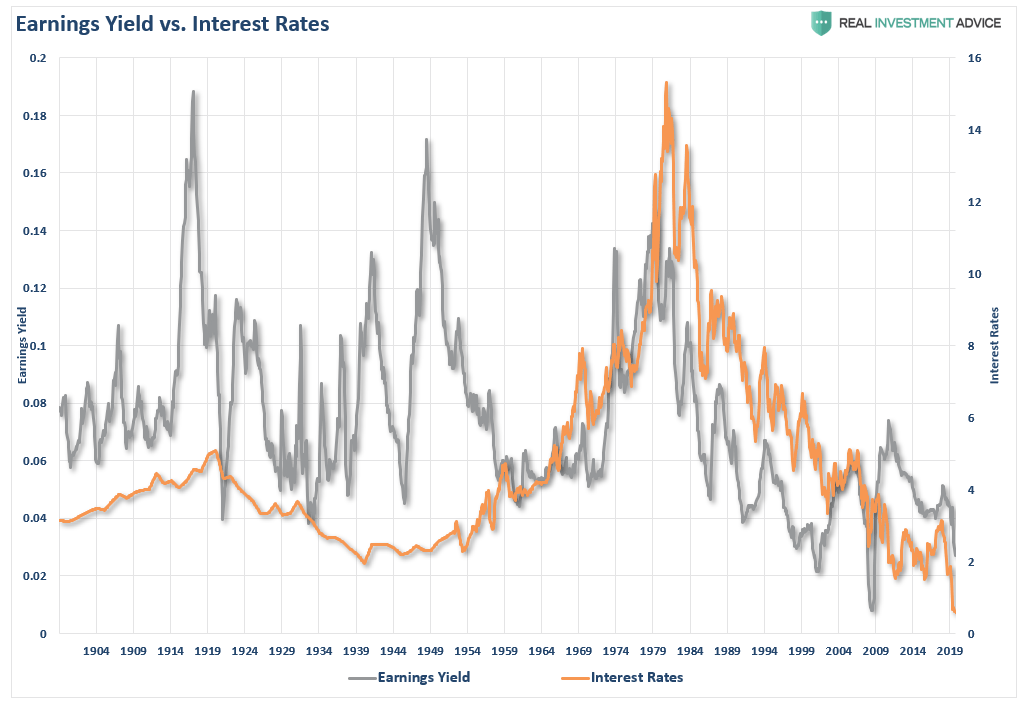 Which one had the better return from 2000 to the present? 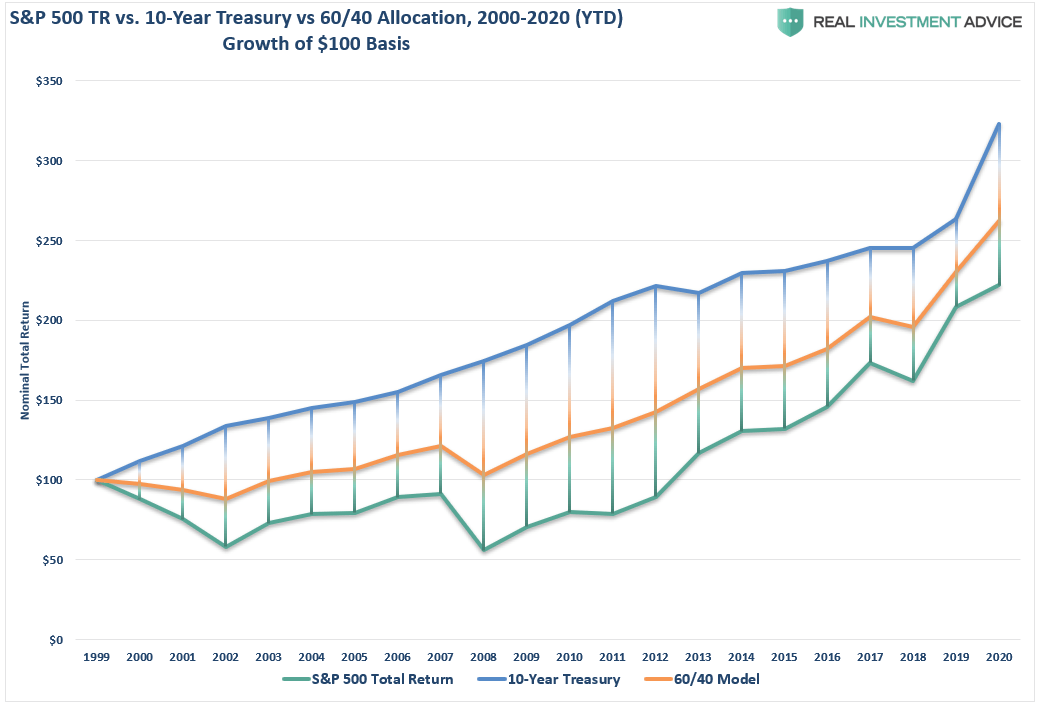 Yet, analysts keep trotting out this broken model to entice investors to chase an asset class with substantially higher volatility risk and lower returns.

An offshoot of the Fed Model to rationalize overpaying for assets is that low interest rates justify high valuations.

However, is the recent decline in interest rates, driven by massive global Central Bank interventions, really providing valuation support? The premise is that cheaper borrowing costs boost bottom line earnings. The problem is that over the last decade, low rates have led to a deterioration in economic growth and prosperity.

The chart below takes the interest rate argument from a little different angle. I have capped interest rates from their “low point” of each interest rate cycle to the next “high point” and then compared it to the S&P 500 index. (The vertical dashed lines mark the peaks in the S&P 500 Index.) 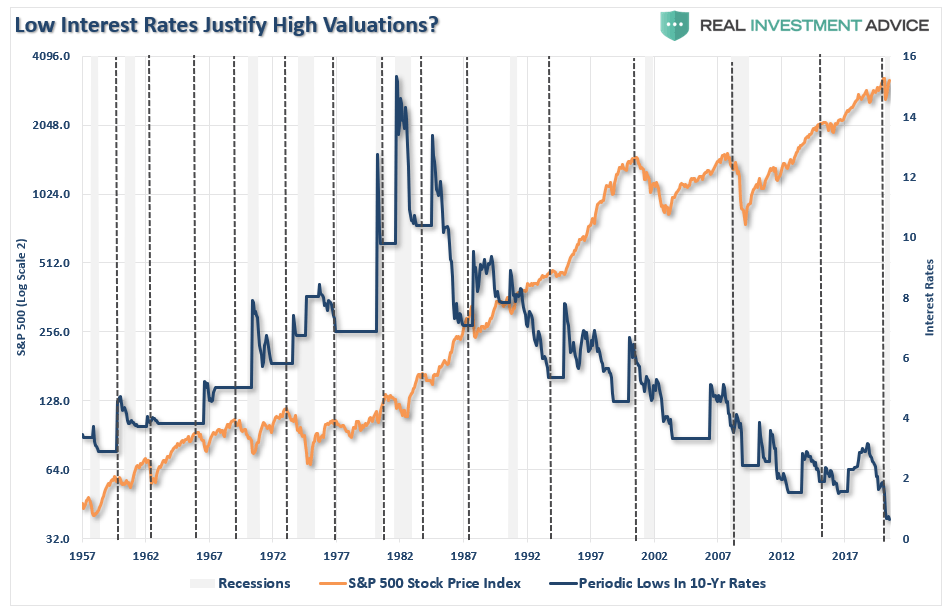 In the majority of cases, the market tends to peak between the low point interest rates for each cycle and the next high point. In other words, a period of steadily rising interest rates is not conducive to higher equity prices.

The primary argument is that when inflation or interest rates fall, the present value of future cash flows from equities rises, and subsequently, so should their valuation. While true, assuming all else is equal, a falling discount rate does suggest a higher valuation. However, when inflation declines, future nominal cash flow from equities also falls, and this can offset the effect of lower discount rates. Lower discount rates are applied to lower expected cash flows.

In other words, without adjusting for inflation and, in no small degree, economic growth, suggesting low rates justify overpaying for cash flows is a very flawed premise.

Historically, when interest rates or infla­tion are low, the stock market’s E/P is also low, as shown in the chart above.

READ ALSO  "Let Me Explain What Happens Next..." - A Reader Sums It All Up Very Ominously

But when isolating the times when interest rates were meager, that has occurred twice; in the 1940s and currently. In the 1940s, stock valuations were low, along with interest rates. Therefore, the statement that low interest rates cause high valuations is a .500 batting average, which is the equivalent of a coin-flip. 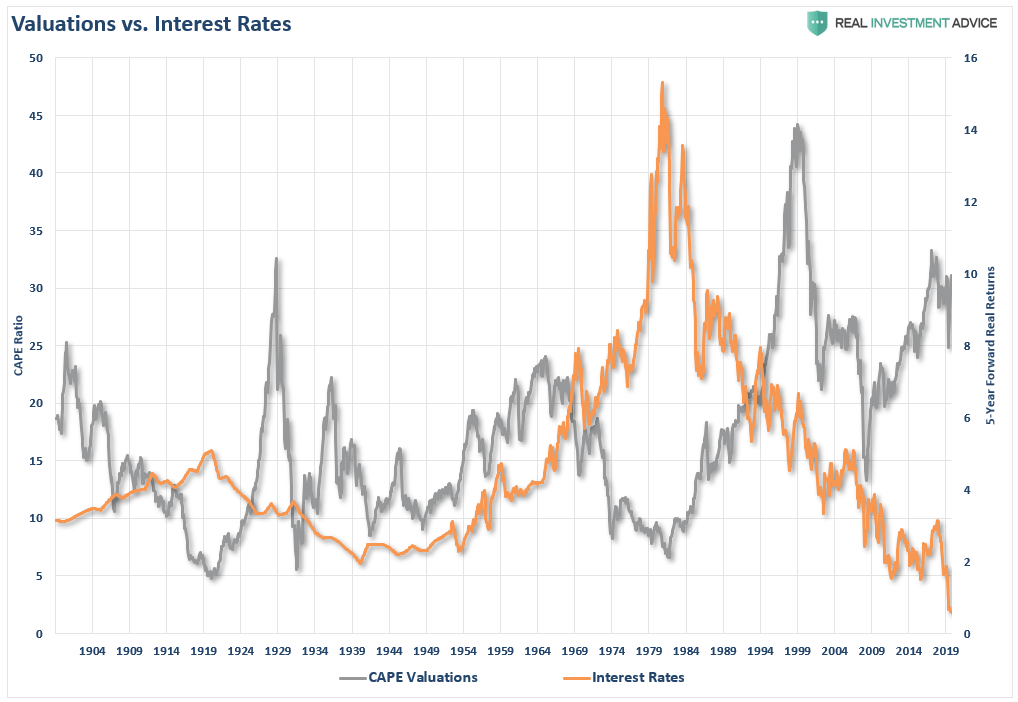 As noted in “Why This Isn’t 1920. Valuations & Returns,” the highest correlation between stock prices and future returns comes from valuations. 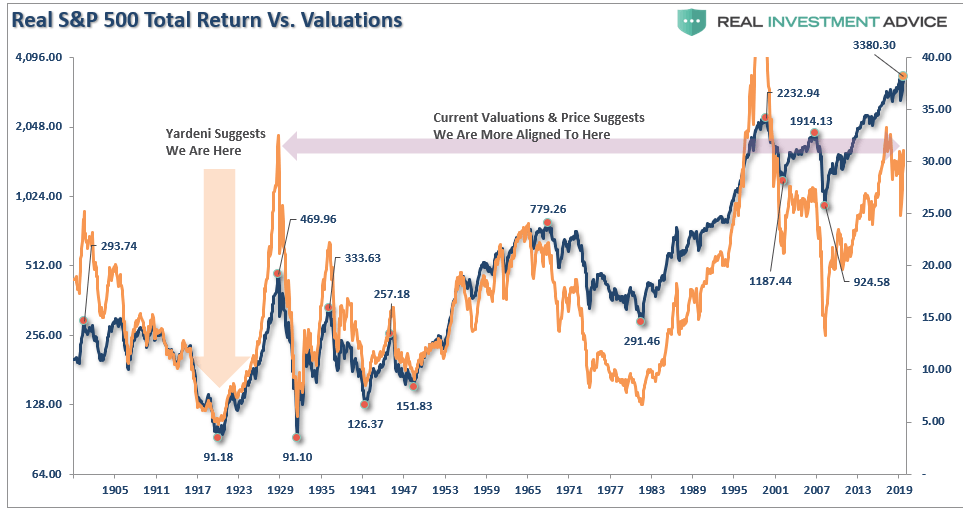 There is little support for the statement that low rates support high valuations, as noted by Cliff Asness previously.

So, when pundits say it is a good time for long-term investors to buy stocks because interest rates are low, and then show you something like chart above to prove their point, please watch the tense of what they say, as what they often really mean is that it was a good time to buy stocks ten years ago, as investors are now paying a very high P/E for the stock market (perhaps fooled into doing so by low interest rates as I contend), and the story going forward may be painfully different.”

The last point is crucially important. The chart below compares earnings yield (inverted scale) to forward 5-year real returns. When E/Y has been near current levels, the performance over the next 5 years has been quite dismal. 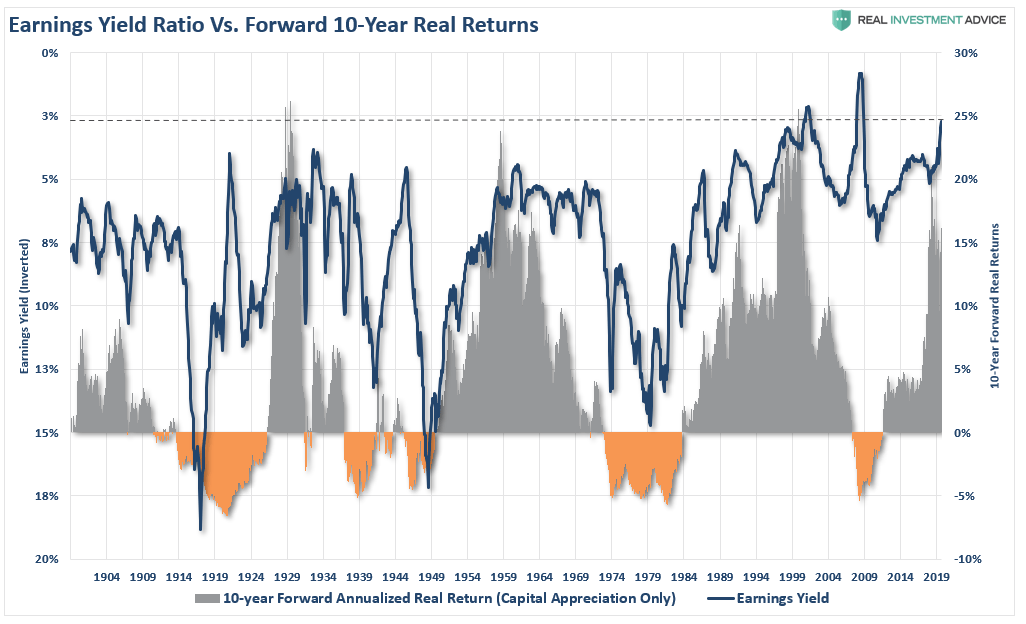 It is imperative to remember valuations are very predictive of long-term returns from the investment process. However, they are horrible timing indicators.

Beware the investment advisor, pundit or superstar investor who is sure that extremely low rates cause incredibly high stock valuations. Or, that a rise in rates from extremely low levels will cause a decline in stock prices. Stocks may fall, and interest rates may rise, but the historical record disagrees that one causes the other.

Previous PostMillions Of Americans Had Their Emergency Savings Wiped Out By DownturnNext PostTony Abbott slams ‘health dictatorship’ of Covid-19 lockdowns, says ‘fear of falling sick’ cancels out ‘being fully alive’