Global stock markets pulled back in early September, after a remarkable run that seemed to defy the reality of recessions around the world. Despite recent volatility, we think market gains for the year are more rational than perceived, given the powerful impact of stimulus and low rates on stock valuations.

Nearly 24 years ago, US Federal Reserve Chairman Alan Greenspan coined the phrase “irrational exuberance” to refer to inflated equity markets that might have lost touch with reality. In 2020, the COVID-19 pandemic prompted a collapse of economic growth. However, world equity markets are up year to date – and the technology-heavy NASDAQ has surged nearly 25% this year through September 15. So, how are investors reconciling this year’s terrible economic data with the market’s exuberance through early September? Is it rational, or irrational?

In some ways, market gains from late March through September are surprisingly rational. There’s an old adage in investing: “Don’t fight the Fed.” This means that when interest rates are falling and central banks are loosening monetary conditions, some of that money will make its way into the stock market and push up prices. That’s a rational response, because looser monetary conditions should stimulate economic activity, which in turn should boost corporate profitability, justifying higher share prices.

Central banks have taken unprecedented action to provide liquidity for the financial system over the last six months. Since developed markets began to lock down economies in an effort to control the novel coronavirus pandemic, central banks have cut interest rates to historic lows and launched quantitative easing measures, such as using their balance sheets to buy corporate debt and government debt. We’ve never seen anything like this, even at the height of the global financial crisis. Aggressive central bank purchases of government bonds in the US, Europe, Japan and the UK (Display) allow governments to issue more debt and suppress the cost of that debt, which has a very powerful effect. 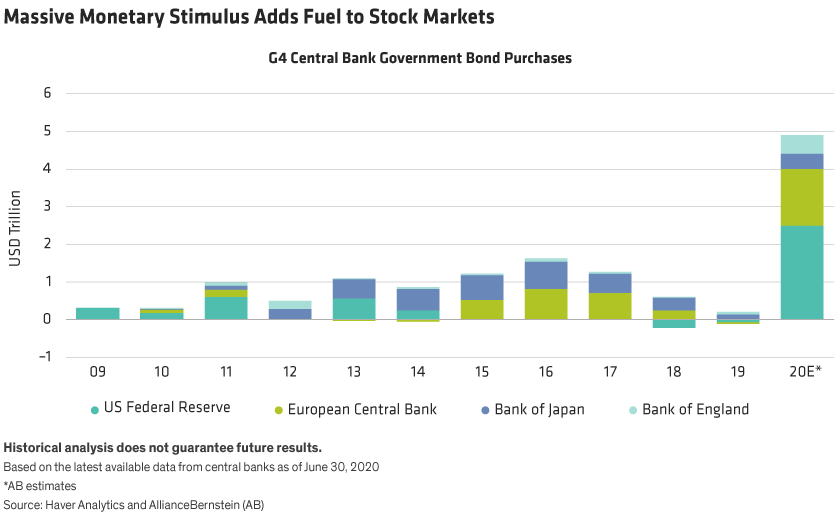 But where has all this enormous stimulus gone? Not into capital investment, with the exception of some work-from-home beneficiaries – such as Amazon.com (NASDAQ:AMZN) – and government healthcare expenditure. Instead, much has gone into increased saving, some of which has made it into the stock market.

In addition to monetary stimulus by central banks, governments have also been providing unprecedented fiscal stimulus (Display). So, perhaps the new adage should be, “Don’t fight the Fed and the Treasury.” 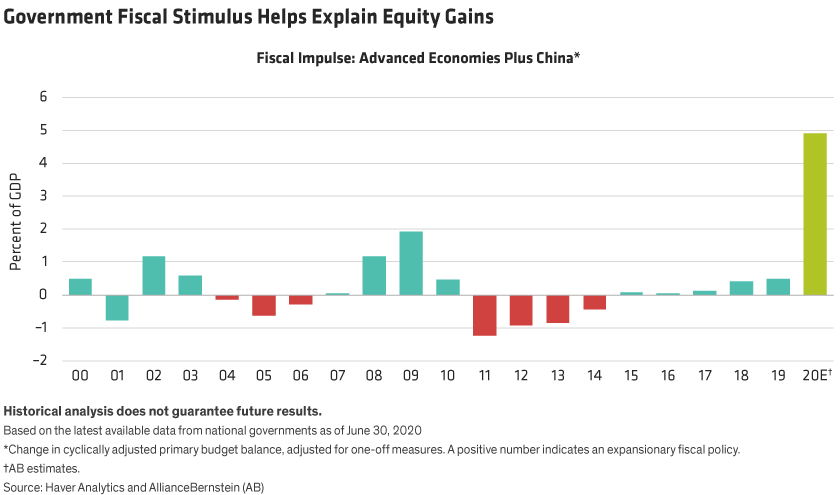 Low Inflation Is Likely to Persist

How much longer will these unusual fiscal and monetary measures continue? In late August, the world’s central bankers resolved to keep rates “low for longer.” In particular, the Fed moved to average inflation targeting of 2%. This means that rather than raising interest rates when inflation hits the current 2% target, the Fed will let inflation rise above 2% for a period to offset the time it was below 2%. And since inflation has been below the 2% threshold for some time, the inflation rate could be left above 2% for several years before any rate hike is likely.

Usually when inflation rises, bond yields move up to reflect investors’ demands for a higher return to offset the inflation risk. However, in the current environment, we expect central banks to use their balance sheets to hold longer duration bond yields down, flattening the yield curve. In this environment of loose money, significant fiscal stimulus and yield curve management, we believe it’s rational for investors to continue to favor equities, which offer higher return potential. What’s more, low interest rates reduce the discount rates that equity investors use to value equities, which pushes up equity valuations.

But What If Inflation Rises?

So, having explained the rational case for equities, why might this year’s gains be irrational? There are two major concerns. First, if inflation does rise significantly, and bond sales by the bond vigilantes more than offset the central banks’ efforts to manage the yield curve, central banks may be forced to take additional action to slow economic activity.

That said, we struggle to see how inflation could rise significantly in the current environment. The COVID-19 crisis and subsequent economic downturn will fuel unemployment and will likely increase the output gap. Productivity has been improving, while increased saving and job security fears are curbing consumption. Meanwhile, China is shifting towards a slower but more sustainable growth model, which should reduce global demand for commodities. And even with trade wars simmering, manufacturers are still looking for low-cost solutions. Of course, if globalization is at an end and trade wars escalate, inflation will likely pick up, but this is not yet the case.

The second concern is about fiscal stimulus. If governments begin to reduce fiscal stimulus before economic activity has recovered enough to sustain further growth, this would create a fiscal drag that would damage the recovery and potentially lead to growth reversal once again.

This is a difficult balance, as governments worry about their increased level of borrowing while desperate to sustain the economic revival, particularly as further waves of COVID-19 infections are likely. Australia and some European governments have already extended their furlough schemes well into next year, and we expect other governments to follow suit. In the US, the politics of the election cycle are making these negotiations difficult.

So, on balance, is it rational or irrational to expect further equity market gains? We believe that the necessary conditions for equity values to rise are positive developments toward a COVID-19 vaccine – which currently seem on track – sustained monetary expansion and significant fiscal stimulus. For now, all these conditions are still in place, so we believe year-to-date market gains have been rational, albeit perhaps a little more exuberant than we would have initially expected.

Clearly, there are major risks that should not be underestimated, and volatility is likely to remain high. The overall breadth of the market, in which a few very highly valued companies are driving the market, is a concern. Given this background, the September declines are a warning for investors to expect potential further drawdowns. In these conditions, we think investors should build a balanced portfolio of consistent growth businesses that are doing well despite the pandemic, together with a group of companies that have suffered in 2020 but should recover well as normality returns.

The views expressed herein do not constitute research, investment advice or trade recommendations and do not necessarily represent the views of all AB portfolio-management teams and are subject to revision over time. AllianceBernstein Limited is authorized and regulated by the Financial Conduct Authority in the United Kingdom.