Qualys Inc. (NASDAQ:QLYS) has outperformed the S&P 500 over the past 5 years, returning 177% compared to the S&P’s 37.5%. This has been driven by the company’s steady sales growth along with its ability to generate healthy profits. Qualys’ profitable growth has been powered by innovations and its ability to cross-sell its increasing number of solutions to existing customers. The company has a strong balance sheet with steady free cash flow generation. Qualys also appears to be undervalued relative to its peers. 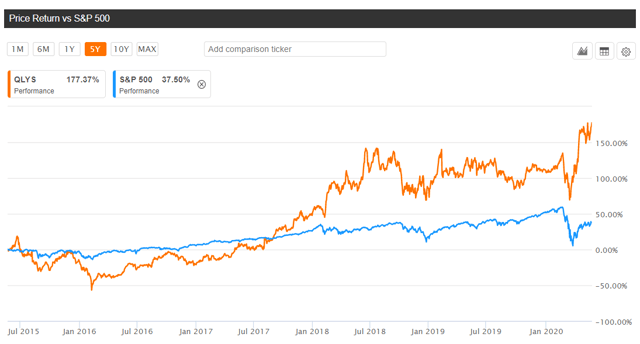 Revenue Growth Has Been Driven By R&D innovation

IT infrastructures are becoming increasingly complex with multiple interconnected systems and related assets. With its cloud platform, Qualys provides an integrated solution to automate and reduce some of that complexity. This value proposition has attracted more than 15,700 customers to its platform so far, with 70% of the Forbes Global 50 companies standardised on the company’s platform. 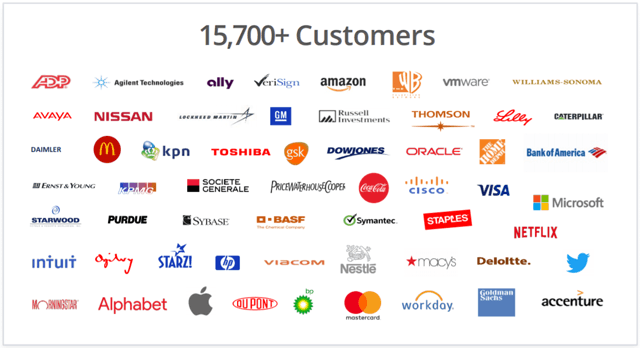 Qualys has experienced steady growth over the years, with revenues growing from $65M in 2010 to $321M in 2019. This represents an annual growth rate of 17%. This growth has been driven mainly from the development of new applications, with the number of apps growing from 2 in 2008 to 19 in 2019. If Qualys can continue growing the number of solutions around its platform to enhance its value proposition, the company should see sustained revenue growth in the future.

Qualys also estimates its addressable market to be $21B by 2021. At its current revenues of $321M, the company has only taken roughly 1.5% market share. To achieve a larger market share, the company would likely be innovating and enhancing its cloud platform and suite of solutions. So far, this investment in research and development has paid off as seen from their large number of customers. As its cloud platform is highly scalable, Qualys would be able to broaden its market share globally once the company readies the local infrastructure.

READ ALSO  Treason In America: An Overview Of The FBI, CIA, And Matters Of "National Security" 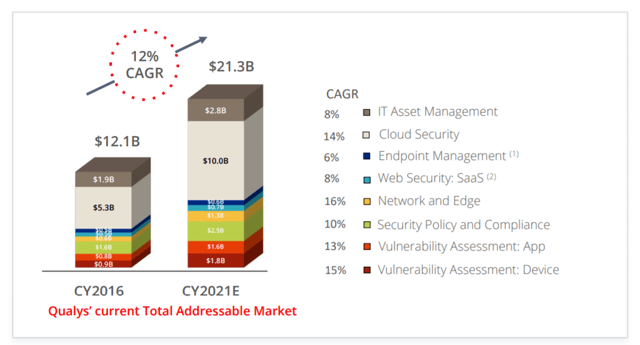 Qualys has been innovating to increase the number of applications on its platform so that it can cross-sell its solutions to existing customers. This has been working so far. The percentage of enterprise customers with more than 5 solutions has increased from 3% in Q1 FY17 to 18% in Q1 FY20. As companies use more solutions with Qualys, it is unlikely they would switch providers due to time and risk. Customers wouldn’t want to incur lost productivity or risk data migration issues if the competitive solution is not significantly better. 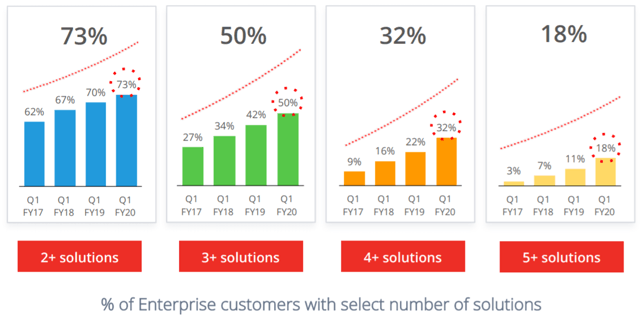 This customer stickiness is reflected in Qualys’ customer retention rate, with customers having 2 solutions at 94% gross dollar retention rate and customers having 5 solutions at 99%. With the same customer using multiple solutions, it also helps Qualys reduce its customer acquisition costs. This has been trending positively, with revenue per sales and marketing headcount increasing from $1M in 2015 to $1.2M in 2019. Qualys has also shown overall operating leverage, with operating margins growing from 1.8% in 2010 to 23% in 2019.

Qualys has increased its overall cash position since Dec. 2019. Its current cash and short-term investments make up roughly $331M, compared to $298M in Dec. 2019. This is due to the company’s strong free cash flow abilities, which was roughly $37M in the latest fiscal year. As the company has no debt, Qualys is in a strong financial position to weather any potential recession. The company is not likely to raise any funds since the company has been profitable in the past 10 years. The high free cash flow generated by the company can be used to innovate on its platform, which helps to increase its competitive position. 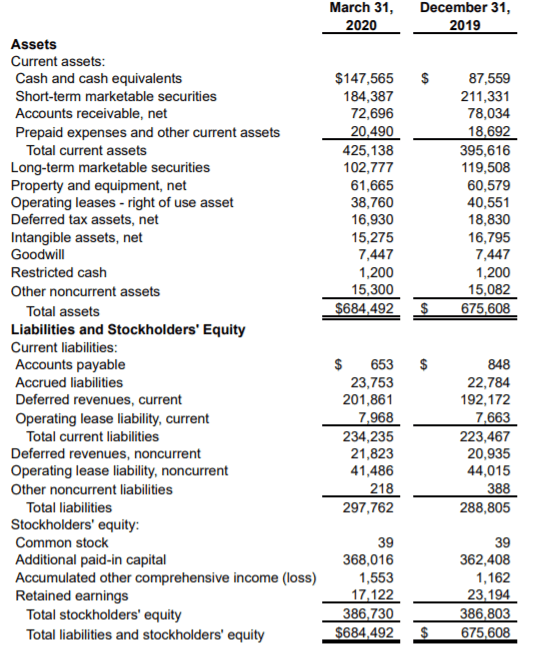 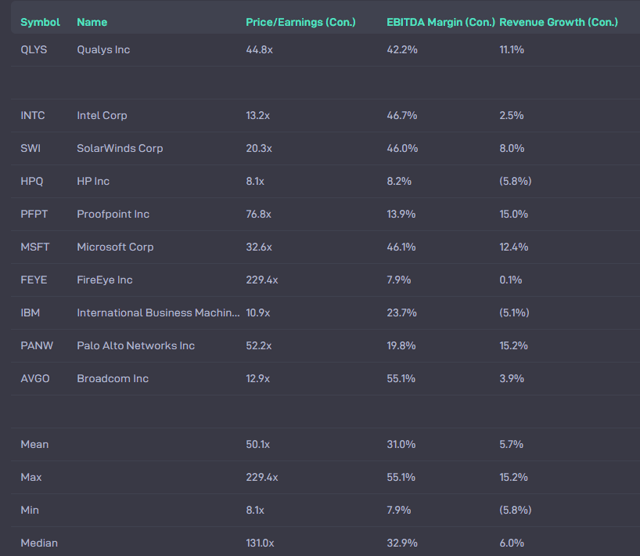 The company faces a large number of competitors as addressed in their annual report:

Some of these competitors like Broadcom (AVGO) and CrowdStrike (OTC:CRWD) are larger than Qualys and likely have larger access to resources and capital. The competitors’ large user base could also have a negative impact on Qualys’ attempt to take market share. If the competitors develop similar solutions, it is likely their customer base would choose to do business with these companies rather than Qualys.

Qualys’ revenue is also concentrated in its vulnerability management solutions (VMS), which generates roughly 73% of its total sales. If the company is unable to continue to renew and grow subscriptions for these solutions, its operating results would likely suffer. If there is a large technology change or competitive threat that renders these solutions obsolete, Qualys could be facing some serious downside. As such, the company is likely to be spending heavily on research and development to address this threat.

For Qualys to continue outperforming the S&P 500, the company needs to innovate to keep competition from overtaking it. The company also has high sales concentration in VMS, so it should attempt to diversify its revenue stream. If investors believe that the company will continue to succeed with its land-and-expand model, then the current valuation looks reasonable relative to its peers.