Qualcomm’s stock hit a record high on Wednesday after it projected a surge in revenues in the coming quarter, thanks to manufacturers including Apple who expect to sell tens of millions of 5G smartphones this holiday season.

The company — which designs, makes and licenses chips used in mobile phones and other devices — said its December quarter revenues should come in between $7.8bn and $8.6bn, a gain of 54-70 per cent from a year ago.

That marks a sharp acceleration from the quarter that ended in September, reflecting the delayed launch of Apple’s iPhone 12 product range, which finally launched last month.

Qualcomm’s December quarter is expected to benefit from Apple introducing four 5G-enabled iPhones. The chipmaker also hopes to supply technology to Huawei but it has not yet received a licence from the US government, which blacklisted the Chinese company last year.

The company’s shares have almost doubled since mid-March as work-from-home trends drive demand for connected technology and the new revenue forecast sent them a further 13 per cent higher in after-hours trading to an all-time high above $145 a share.

“Our 5G strategy is really working, even in a much smaller market because of the pandemic,” said Cristiano Amon, Qualcomm president, who oversees the company’s semiconductor business. The September quarter was a “very good quarter for mobile even though we don’t have the full impact of a large-scale US business”, he said — a reference to the iPhone 12 delay. 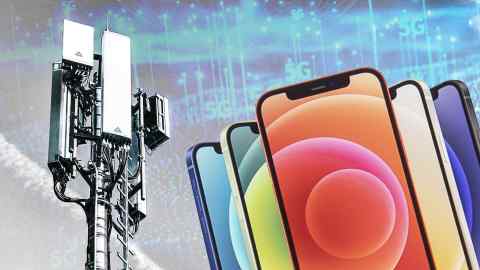 Adjusted revenue jumped 35 per cent to $6.5bn in the three months to September, beating the consensus of analysts’ forecasts, which was $5.9bn. Despite the iPhone delay, it was also ahead of the $6.3bn top end of guidance the company supplied in July, according to Refinitiv.

“Our investments in 5G are coming to fruition,” said Steve Mollenkopf, chief executive since 2014, in a press release.

He called the September results “exceptional” and said Qualcomm was “well positioned for growth in 2021 and beyond” as wireless technology accelerated.