QAnon has the makings of America’s al-Qaeda

Mention terrorism and most Americans will instantly think of Muslims. On Friday the US will commemorate the 19th anniversary of the September 11 2001 terror attacks. In reality, America should nowadays be far more worried about domestic threats. Two-thirds of its terrorist incidents last year were carried out by rightwing extremists. That rose to 90 per cent in the first five months of this year.

Many of these were inspired directly or implicitly by QAnon, the extremist cult that is often downplayed as a fringe conspiracy group. That label should be kept for UFO spotters and people who think the British royal family killed Diana, Princess of Wales. As the FBI has concluded, QAnon bears all the ingredients of a “domestic terror threat”.

The difference with al-Qaeda is that QAnon has the sympathy of senior US figures, including, implicitly, that of Donald Trump. Whether the president knows much about the group’s bizarre cult theology is beside the point. He retweets them and welcomes their support.

The great danger to the US will come if Mr Trump loses in November as opinion polls indicate is likely. In QAnon theology, that will be the equivalent of the infidels occupying the Holy Land. QAnon’s world view is literally predicated on Mr Trump as their only hope of defeating the satanic forces that control America’s deep state.

Many Americans do not take the threat seriously. This is despite the fact that QAnon-inspired gunmen have carried out or attempted several recent attacks. Most of the successful white nationalist attackers, including in Christchurch, New Zealand, have issued manifestos on 8chan, or 4chan, QAnon’s preferred websites, using similar rationales to the group.

That also applies to the rightwing extremist who killed 23 Hispanics in a shopping mall in Texas last year. Another killed 11 Jewish worshippers in a Pittsburgh synagogue the year before. There have been dozens of smaller incidents or foiled plots. Americans are used to screening out white perpetrators as lone wolves or people with mental health problems.

They should listen more closely to the FBI, which says QAnon has the crucial markers of a terrorist group. QAnon thinks we are in a Manichean fight between the forces of dark and light. Al-Qaeda believed the Muslim world was being polluted by rapacious unbelievers. QAnon claims Washington is controlled by devil-worshipping child molesters who want to destroy America.

Each movement is emphatically anti-Semitic. Al-Qaeda talked of the “Crusader-Jewish” axis. QAnon claims that George Soros, the Rothschilds and other well-worn Jewish culprits are behind the plot.

That one wraps itself in Islam and the other Christianity is beside the point. Nor are technological differences salient. Al-Qaeda exploited the early internet. QAnon is the spawn of social media and the dark web. What binds them is a violently apocalyptic world view. 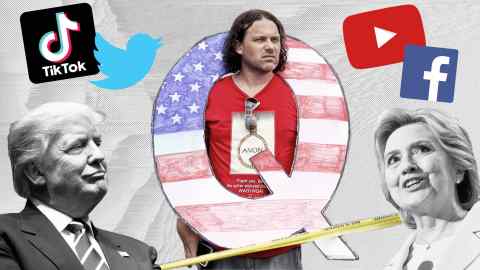 Barely a day goes by in the US when groups of parents do not hold a “#SaveOurChildren” protest. Some are witless recruits to what sounds like an obvious cause. Others believe that “dark hats” in Washington protect a subterranean cabal that literally snatches children off the streets.

Platforms such as Facebook, Twitter and YouTube bear huge responsibility for directing users towards such derangement. It took until June — almost three years after QAnon emerged — for Facebook to start taking down the group’s posts. Fact checking is usually futile.

Like the Salafists, QAnon’s followers inhabit a closed loop belief system. Among those who have sworn an oath as a QAnon “digital soldier” (“where we go one, we go all”) are Michael Flynn, Mr Trump’s former national security adviser, and Marjorie Taylor Greene, a congressional candidate, who Mr Trump calls a “future Republican star”.

Ms Greene describes Mr Trump as a righteous sword against evil. Common sense suggests the biggest terrorist threat would thus come in the aftermath of his defeat, which would trigger QAnon thoughts of apocalypse. The group’s theories existed before the arrival of “Q”, an anonymous poster who claims to be inside the deep state.

Its first attack came a month after Mr Trump was elected when a man named Edgar Welch broke into a Washington pizza parlour with a semi-automatic weapon. He believed the parlour was run by Hillary Clinton and kept child sex slaves in its basement. “The intel on this wasn’t 100 per cent,” Welch later admitted in what ought to be the motto of our age.