Q2 2020 Corporate Profits: The Tax Lever Already Has Been Pulled

Recently, we received the second release of the Q2 GDP report, which contains data on corporate profits across the entire economy. The corporate sector is far larger than the handful of companies we watch on our screens every day, and the profits across the whole economy, both public and private, are critical to monitor.

While public companies are generally larger, employment opportunities, debt service capabilities, and the ability to grow are even more critical to monitor in the aggregate corporate sector. The performance of Apple does not foreshadow economic activity in the broader corporate sector.

Each quarter, S&P 500 companies report earnings that have been engineered with share buybacks and other accounting games. Looking at corporate profits from the National Income & Product Accounts “NIPA” shows us what the profitability of the entire corporate sector of the economy is really like, without the impact of share buybacks and financial engineering games.

The corporate profit data from the NIPA is far more reliable than anything that gets reported by public companies, and it’s far more encompassing. The data is delayed, with new information for Q2 published only recently. This data is backward looking for the short-term trader but extremely important for the long-term analysts focused on the economic impacts of reduced profitability from the corporate sector.

Let’s have a look at the data through Q2.

Before taxes, total corporate profits in the economy fell to $1.8 trillion in Q2, an 11% decline on a seasonally adjusted annualized basis (SAAR).

This is the lowest level of corporate profits since Q2 2011. 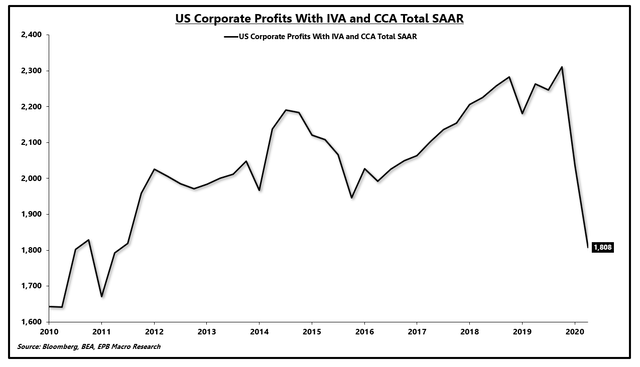 After-tax corporate profits fell 12% (SAAR) to about $1.6 trillion. This represents the lowest level of after-tax profits since Q1 2014. 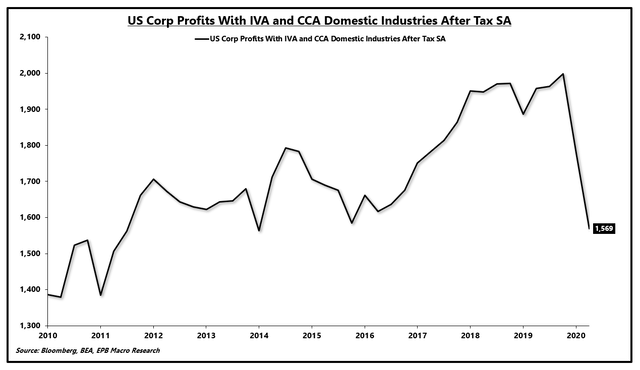 Interestingly, the effective tax rate graphed as the amount of taxes paid divided by pre-tax corporate profits rose to 13%. 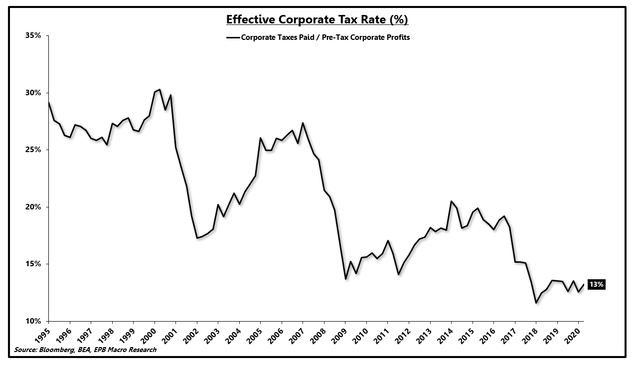 With the tax lever pulled quite aggressively over the last 30 years, it’s hard to see how effective tax rates decline meaningfully from the already low 13% level. After recessions, historically, it took pre-tax corporate profits about 4.25 years to return to peak levels. Quicker for after-tax corporate profits, which is what really matters, thanks to lower effective tax rates. Without the tax lever to pull, we are looking at potentially 4-5 years for after-tax profits to return to peak levels. 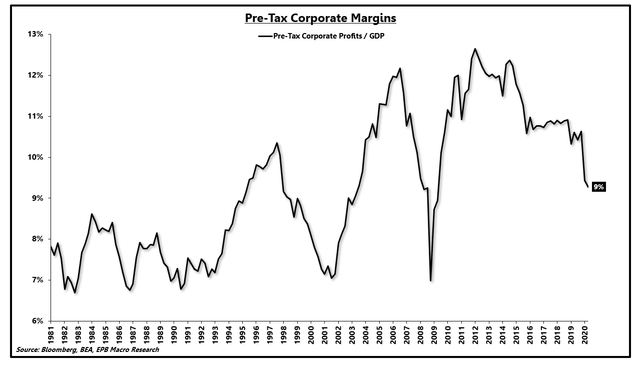 After-tax corporate profit margins fell to roughly 8% but have been on a steady upward path with higher highs and higher lows thanks to lower effective tax rates. If we cannot lower corporate tax rates any further, this multi-decade margin expansion will start to flatten out, pressuring corporate profits in the broader economy. 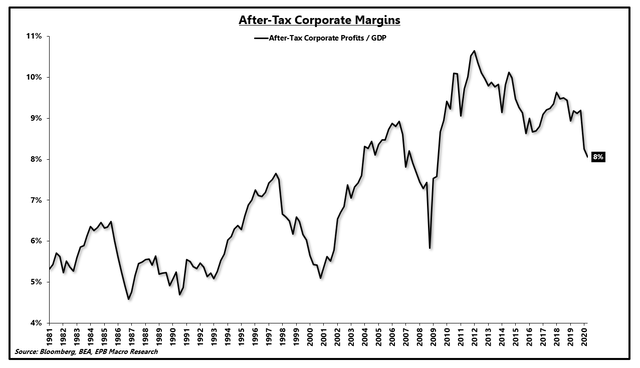 Companies fear cutting dividends, and the Federal Reserve allowed the capital markets to stay open after a significant freeze during March and April. As a result, corporates borrowed money to maintain dividends, pushing the ratio of net dividends paid as a percentage of pre-tax profits to the highest level ever (ex. 2008), at 76%.

Dividends As A % of Pre-Tax Profits: 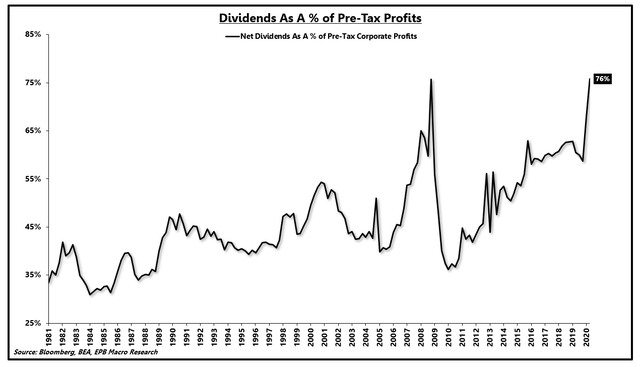 As an economy, we have prioritized dividends over investment, and we have thus seen net dividends paid as a percentage of GDP rise to the highest level ever.

Investors have pressured companies to maintain and continue increasing dividends at a rate much faster than economic growth, and the result has been a steady rise in the ratio of dividends paid as a percentage of GDP.

Dividends As A Percent of GDP: 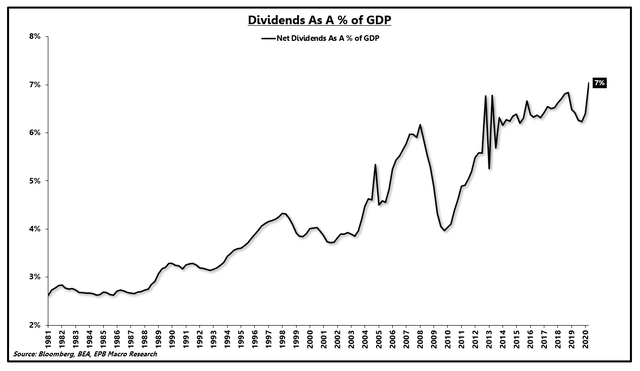 Over the last 10 years, pre-tax corporate profits have increased by just 1% annualized. This is before adjusting for inflation, so a decline in real terms. 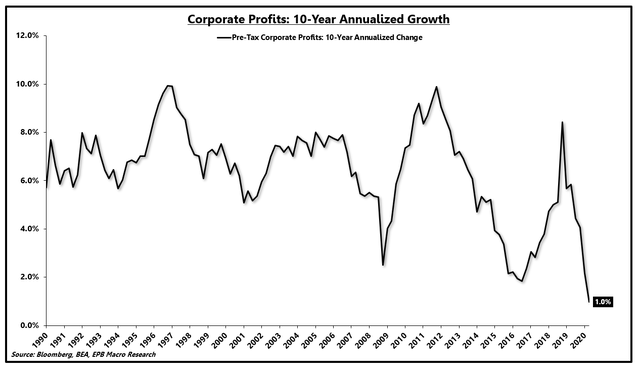 The corporate sector has become extremely indebted over the last 10 years, and a lack of profitability will weigh on margins going forward. Lower margins are likely to lead to less investment and employment out of the broader corporate sector.

Corporates were able to continue growing dividends and margins in the face of weakening growth, mainly due to an effective tax rate than has declined from 30% to 13%.

Assuming effective tax rates do not drop much further, and potentially even rise, we will see corporate margins start to flatten out.

If dividends continue growing, it will be a swap of debt for dividends for the corporate sector as a whole.

Q3 and Q4 are likely to show a substantial increase in profits due to a recovery in the economy from Q2.

With the corporate sector taking on much more debt to get through the pandemic, the critical question is how long it takes for economy-wide corporate profits to return to the peak levels seen in late 2019.

With debt levels at new highs, margins will remain under pressure, which should impact investment and employment decisions until corporate profits start to recover above their 2019 peak. Tax cuts may not be a lever to speed up the process this time around.

EPB Macro Research provides macroeconomic analysis on the most significant long-term and short-term economic trends, as well as the impact on various asset prices, including stocks, bonds, gold, and commodities.

If you understand the economic cycle, you can profit from the opportunities that emerge from its ebb and flow.