Pure Storage (PSTG), one of the best All Flash Array (AFA) makers in the industry, is a buy in our opinion as it continues to grow faster than market and is taking share from large incumbents such as NetApp (NTAP), Hewlett Packard Enterprise Company (HPE), Dell (DELL) and IBM (IBM). Yet it is unloved and underappreciated by investors. Customers, however, love Pure Storage’s products (a high Net Promoter Score of 86 confirms the affection) and Gartner and other third party independent analysts also consider the products some of the best in the industry. Despite reporting solid results and issuing positive commentary when Pure Storage last reported results on May 29th, the stock has languished. Given our confidence in its continued ability to take share, out-execute its larger rivals by launching quickly and efficiently products based on newer NAND flash geometries, compelling valuation, and a potential for a catchup trade, we would be buyers of the shares.

Pure Storage has one of the best portfolios in the industry

Pure Storage, despite having one of the best and modern product portfolios in the industry, continues to underperform the broad tech market. Many investors we spoke to believe that majority of the new storage capacity is going to be deployed in cloud and on-premises storage growth is likely to continue to decline. While we agree that majority of the growth will likely be coming in the cloud, a significant portion of workloads (more than 50%) will still continue to remain on-prem. Much of the on-prem storage infrastructure is still based on old spinning hard disk drive technology which is slow and inefficient.

Enterprises are upgrading their existing storage infrastructure with newer and modern data arrays that are based on NAND flash. The newer storage arrays are smaller, consume less power, are less noisy and do not generate excess heat in the data center and hence do not need to be cooled. Flash storage arrays in general are cheaper to operate and are extremely fast, speeding up applications. Pure Storage by all accounts makes the best storage arrays in the industry and continues to grow faster than major storage vendors such as NetApp, Dell, HPE and IBM.

According to Gartner, Pure Storage’s market share was 12.7% in C1Q20 and was up from 10.1% in the prior year. HPE, NetApp and IBM lost share. According to blocksandfiles.com, AFA vendor market share sizes and shifts are paraphrased below:

Pure has been gaining share almost every year since it began selling storage arrays in 2011. According to Gartner, Pure Storage is consistently rated the highest for the completeness of vision as the following chart illustrates. 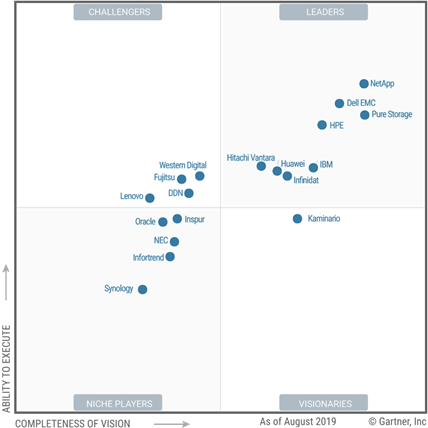 Investors are concerned storage is in secular decline

Investors we spoke to are concerned that storage is in a secular decline due to workloads moving to public cloud vendors such as Amazon Web Services (AWS), Microsoft Azure Services (MAS) and Google Cloud Platform (GCP). Investors seem to think that storage companies such as Pure Storage will likely have their business decimated by the movement of applications to public cloud. While Cloud is certainly making the growth of on-prem storage to slow, the impact is mainly being felt by larger incumbent vendors such as Dell, HPE, NetApp and IBM. Each of these companies saw their storage revenues decline last three to four years, given many customers think their products are somewhat inferior to Pure’s products. However, Pure Storage has the distinction of growing its revenue in each of last 9 years.

What are Pure Storage revenue drivers

Pure has products to address the growth of Cloud storage as well as products to drive the growth of on-prem storage. For on-prem data center, Pure sells Flash Array to address block storage workloads (for databases and other mission-critical workloads) and FlashBlade for unstructured or file data workloads. On-prem storage revenue is mainly driven by legacy storage array replacement cycle.

In addition, the company also sells subscription products such as Pure-as-a-service and Cloud Block Store. Enterprises buy storage from vendors such as NetApp or Pure in the cloud to prevent vendor lock-in by the cloud providers.

Despite reporting solid results both in F4Q20 and F1Q21, Year-to-date (YTD), Pure Storage is only up around 2%, while the Nasdaq is up around 17% and the SOX Index is up nearly 11%. 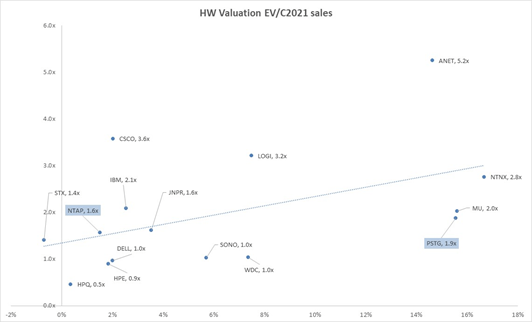 Pure Storage has a history of beating estimates and guiding up. Over the last 20 quarters, the company beat revenue 17 quarters by an average of $4.9 million or about 3%. Out of the three times that the company missed on revenues, once was due to supply constraints at one of its distributors and the other two times were due to Average Selling Prices (ASP) declining faster than the company forecasted. Higher-than-expected ASP declines (due to NAND oversupply) is one of the risks of the storage business. The following chart illustrates Pure Storage’s performance on meeting its outlook.

After the company reported F1Q21 (April quarter) results, the company did not provide formal guidance for F2Q21 (July quarter) citing lack of visibility into its pipeline and potential deal closings. Pure Storage also withdrew its full-year guidance, citing increasing uncertainty with macro and loss of visibility into deal closings. However, the company commented that the “sales will be near flat year-over-year and operating profit will be near break-even” and cautioning investors that these comments should not be construed as formal guidance. Given the aforementioned comments, the Street is forecasting revenue to be around $396 million, essentially flat year-over-year, and EPS of a penny. We believe this guidance is conservative and is more than achievable.

READ ALSO  U.S. Oil Product Demand Is Set For A Biden Boost In 2021

A number of companies such as Micron reported recently better-than-expected results and also provided guidance that was ahead of estimates. Given this and our belief that storage is less discretionary than many on the street agree, we believe Pure Storage will likely beat estimates when it reports results on August 19th. We also expect the company will desist from providing formal guidance given the uncertainty surrounding the opening of the economy following COVID-19. Since we believe storage is less discretionary than what many people believe, we are incrementally more optimistic on Pure Storage’s outlook. Therefore, our revenue and EPS estimates are ahead of consensus. Here is the chart of our estimates, when compared to the consensus.

Risks to owning the stock

Pure Storage competes with some of the stalwarts of technology industry such as NetApp, Dell-EMC, Hewlett Packard Enterprise, IBM, Hitachi, etc. These companies control vast distribution networks, have incumbency with many of the biggest storage spenders in the industry, and have strong balance sheets. All of the aforementioned companies also generate solid cash flow from operations and are plush with cash. Time and time again, these large companies have resorted to cutting the price of their products and even selling the products at a loss to lock up certain strategic customers. Many of these large companies also use bundling (i.e. bundle servers along with storage) to foreclose opportunities for smaller competitors. Prolonged and indiscriminate price war within the storage industry could have a negative impact on Pure Storage’s revenue and earnings. Any shortfall in revenue and profits due to price wars or other bundling techniques could lead to a stock sell-off.

Pure Storage buys raw NAND flash from OEMs such as Micron, Hynix and Samsung. The cost of NAND is dictated by supply-demand dynamics within the industry. During 2019, rapid NAND price declines impacted revenue and margins for the company. The price declines were abrupt and violent and Pure Storage’s ASPs declined faster than what the company was forecasting at that time. Historically ASPs for storage products declined in high single-digits (around 8-9%) year over year. However, during the early part of 2019, ASP declines were in mid-teens impacting revenue and margins.

During the times of supply constraints, NAND Flash OEMs first choose to sell available NAND to their larger customers such as Dell/HPE/Apple, etc. before Pure Storage could get some supply. In those instances, Pure Storage would need to buy supply of NAND on the open market at a higher price. While the company can pass along some part of higher NAND cost to customers, it is not always possible for the company to recoup lost profits. Therefore, Pure Storage is at the mercy of its large suppliers of the storage components.

Macro and management execution are always a major risk for most companies that have a fairly large perpetual/Capex based revenue streams. Pure Storage derives a majority of revenues by selling storage boxes, which are a capex line item for most enterprises. VMware’s quarters are usually back-end loaded – i.e., a significant portion of the business closes during the last two weeks of the quarter. Any deal slippage for any reason during the last weeks of the quarter could impact revenue and earnings, leading to a stock sell-off.

How to invest in the stock

Since the company reported results on May 29th, the stock is down 3% and has underperformed the market. The company is expected to report results of F2Q21 on August 19th. We expect Pure Storage to report results largely in line to ahead of Street estimates and issue commentary that is likely positive. We believe any positive commentary on the subscription business and pure-as-a-service offering will be favorably viewed by professional investors. It is highly probable that Pure Storage may not issue formal guidance for the October quarter, but may issue qualitative comments like it had done for the July quarter. Since we are fairly confident on the company’s longer term prospects and the strength of product line, we would be buying ahead of company’s results. For some unforeseen reason, if the stock sells off, we believe it provides an even better buying opportunity. We would be backing up the truck and buying more shares.

Net-net, given that the company is considered one of the best new age data storage companies in the industry, and due to reasonable valuation, we would be buying shares of the company on any dips. In the event the company misses estimates or the stock sells off due to other macro factors, we would urge investors to double down and buy more.