Pure Gold Mining: A Look At The Valuation After This Advance (OTCMKTS:LRTNF)

It’s been a volatile start to the year for many of the gold juniors (GDXJ) after the mid-March market turbulence sent them tumbling off a cliff, but many of the best names have come roaring back from their 52-week lows with a vengeance. Pure Gold Mining (OTCPK:LRTNF) is one of these names, with the stock up over 50% year to date, and an astounding 125% in Q2 alone. The catalyst for this exceptional performance is the realization that Pure Gold will be one of the newest Canadian gold producers by Christmas, and the strength in the gold (GLD) price will see the company enjoying 50% plus margins. However, this near-parabolic rise has closed the majority of the gap in the stock’s undervaluation from six months ago, and the stock is beginning to get extended short term with a triple-digit return in barely 50 trading days. Based on this, I believe investors would be wise not to chase the stock at current levels. 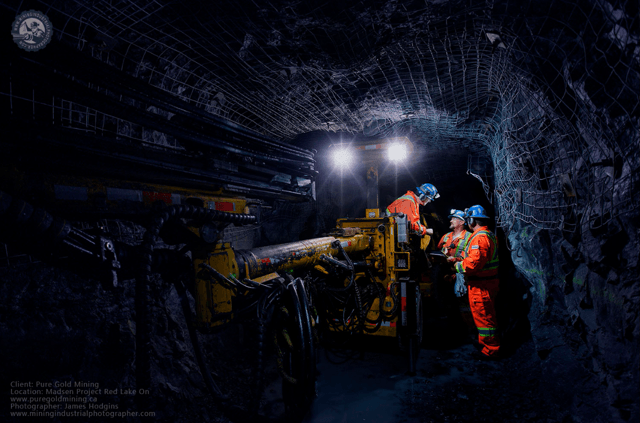 Just over three months ago, I wrote on Pure Gold Mining, discussing that the stock remained quite undervalued despite sitting just shy of all-time highs in February. The company was set to be one of the newest Tier-1 gold producers by the end of this year, was valued at a mere $86.00/oz based on its 2.6 million-ounce resource, and it looked like it was only a matter of time before the stock blasted through its multi-year resistance level. Since that time, we saw a massive shake-out in the stock in March, followed by a near parabolic rise since, leaving the stock with one of the most impressive returns year to date among the universe of junior gold miners. In addition, the company has continued to bolster its balance sheet, given the warrant exercise that’s just come due and the new financing announced last week. This has left the company with a fortress-like balance sheet, allowing Pure Gold to aggressively explore its land package while putting its mine into production. Before digging into the valuation, let’s take a look at the project below: 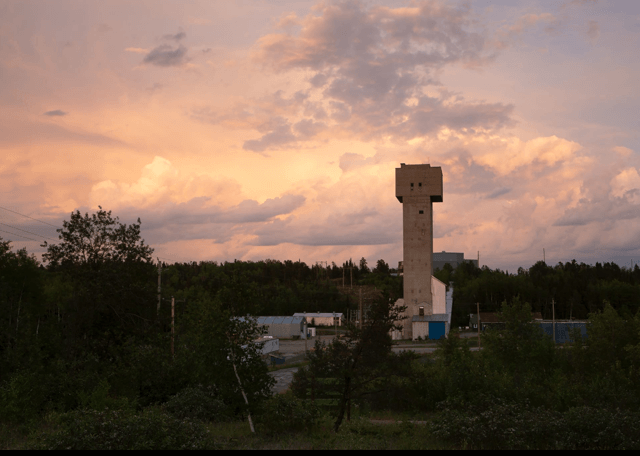 Pure Gold Mining up until recently was an explorer in one of the most prolific mining jurisdictions in the world, Red Lake, in Ontario, Canada. The company has the third-largest land package in the district, a 2.6 million ounce resource, and picked up their property in the depths of the gold bear market for barely C$10 million, as well as shares, from Claude Resources. The 900,000-ounce resource that was acquired and the 4,000-hectare land package came with a 500-tonne per day mill and a 1,200-meter shaft. This sweetened the deal even further, making the Madsen acquisition a homerun as long as one was confident in the historical resource and the team’s ability to discover new gold on the property. 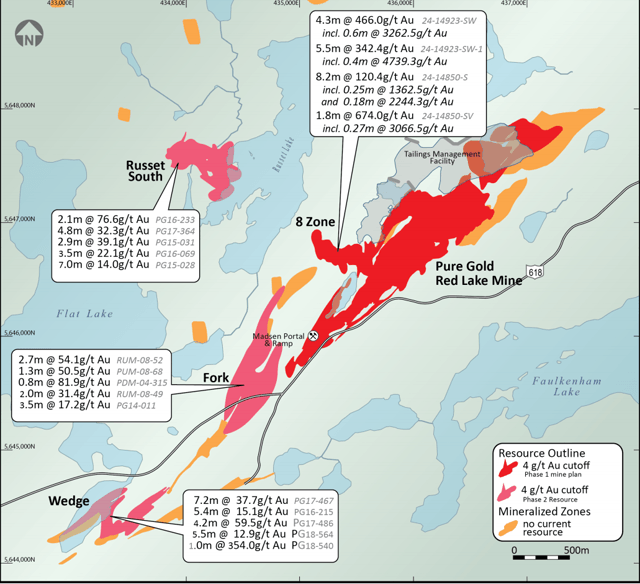 To date, Pure Gold CEO Darin Labrenz and his team have done a phenomenal job delineating the property, nearly tripling the resource, uncovering new satellite deposits, and are now within a year of being awarded the title of gold producer. Notably, they’ve accomplished this during a six-year period that’s been dismal at best for the micro-cap gold juniors until recently. Fortunately, for the Pure Gold team, the gold price has been steadily climbing since 2016, and this has bolstered the already exceptional project economics even further based on recent gold prices, as we can see below. 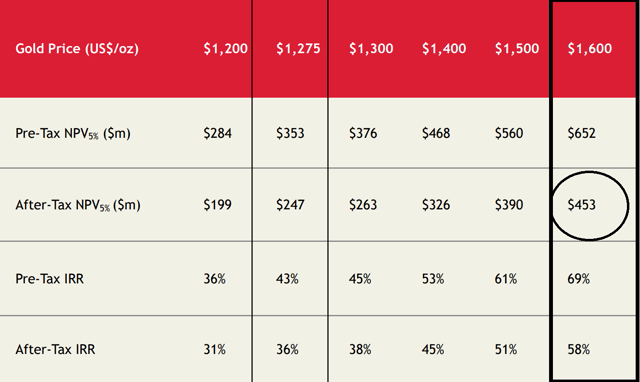 If we look at the table above, we can see that Pure Gold’s 2019 Feasibility Study was done with a base case of $1,275/oz gold, projecting a 12-year mine life, 80,000 ounces of annual gold production and an After-Tax NPV (5%) of C$247 million. Using a gold price that’s 6% below current prices at $1,600/oz, we can see that the After-Tax NPV (5%) has nearly doubled and is now sitting at C$453 million. Using a 0.72 Canadian Dollar/US Dollar exchange rate, this equates to $326 million. These economics are incredible, considering that this Feasibility Study is based on only 40% of the company’s total 2.6 million-ounce resource, and especially when considering that the company has been busy conserving cash and not aggressively exploring the past few years. Also, with projected all-in sustaining costs of $787/oz, the company would have industry-leading margins with the industry average costs for gold producers closer to $980/oz. Therefore, while this was a great project at $1,300/oz gold, it’s a cash flow machine at $1,500/oz gold or higher.

The minor issue, however, is that my thesis laid out in February was that the company was significantly undervalued trading at barely 0.60x P/NAV and only US$86.00/oz. This is because emerging producers often fetch valuations closer to 0.90x P/NAV, and we’ve seen suitors acquiring Tier-1 gold producers for an average of $150/oz. Given the parabolic rise we’ve seen, Pure Gold is currently trading at an enterprise value of US$341 million, based on 383 million shares outstanding, a US$1.00 share price, US$72 million in cash, and US$30 million in debt. Based on the company’s enterprise value and share count growing the past few months substantially, it’s hard to argue that the company is significantly undervalued any longer. This is because the company is now trading at nearly 1.05x P/NAV and an enterprise value per ounce of US$134.78/oz.

It’s important to note that, while suitors made past acquisitions at US$151.31/oz, these were proven and producing assets, and Pure Gold is not one yet. While I don’t expect any significant hiccups and significant deviations from the mine plan to actual mining, there is some risk involved. Therefore, it would make sense that Pure Gold Mining would trade at a minor discount to the price paid per ounce for producers. Some investors will argue that these acquisitions were made at lower gold prices, and therefore, these dated numbers are ancient history and hardly relevant for comparison. While this is true, and the gold price is quite a bit higher, we have not seen any evidence of suitors paying up for ounces. In fact, the amount paid for producing assets is actually lower than it was twelve months ago, despite a higher gold price, as I have pointed out in prior articles. This is evidenced by the recent acquisitions of TMAC Resources (OTC:TMMFF), which was recently acquired for barely US$25.00/oz, with a multi-million-ounce resource. Yes, the mine was plagued with problems, and yes, it was out of the way in the Northern Territories, but the fact is that producers are not paying up for assets, whether exceptional or problem-ridden. 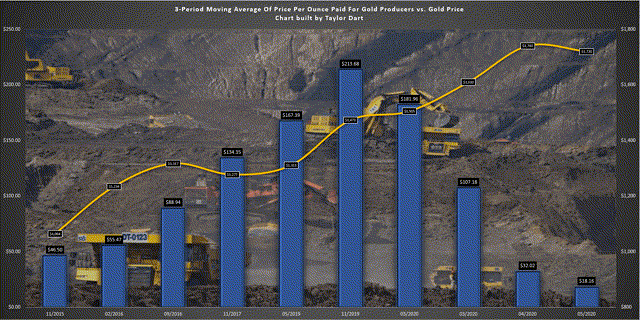 The more significant issue for Pure Gold Mining stock is that the stock is now getting ahead of itself from a technical standpoint at the same time as it’s approaching closer to fair value. As the chart below shows, the stock is up 120% in Q2 alone, just tagged a tough psychological level at US$1.00, and is more than 40% above its 200-day moving average. Typically, stocks can have a tough time making further headway when they’re this far extended above long-term moving averages, and I believe Pure Gold could run into some trouble up here if this rally continues. Therefore, while investors could undoubtedly do well holding here, if they’re okay with sitting through pullbacks and some volatility, buying the stock here above US$1.00 is probably not a great idea. 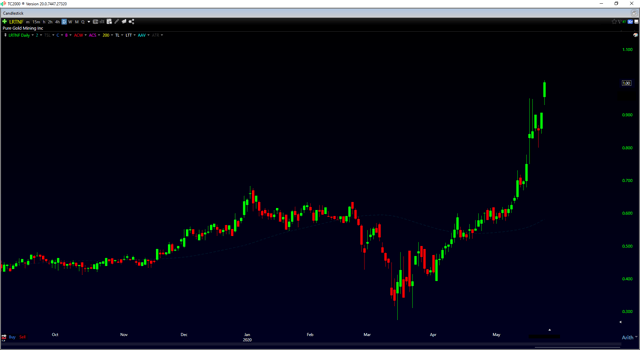 Pure Gold Mining is an exceptional stock and will be one of the newest Canadian gold producers within the next 12 months in a gold price environment that couldn’t be better for the company. However, the majority of my thesis for this emerging producer has played out with the stock valued at 1.1x P/NAV and above US$130.00/oz, and I see the stock as close to fairly valued for a near-term producer with six months before its first gold pour. Therefore, while there’s certainly a case to be made for long-term upside, it’s much less clear if there’s more upside short term. Based on this, I do not think investors should chase the stock here, and I believe that the US$1.00 level is an opportune spot for traders to sell 1/4 of their position and book some profits.