Pulling In The Bear Claws (NYSEARCA:SPY)

The stream of earnings of companies in the S&P 500 (SPY) stretch indefinitely into the future, grow at an indefinite rate and are discounted back to a present value at an undefined rate. Perception of this present value fluctuates apparently in cycles. Here is the model based on the 10 cycles I am now tracking (up from 9 previously). 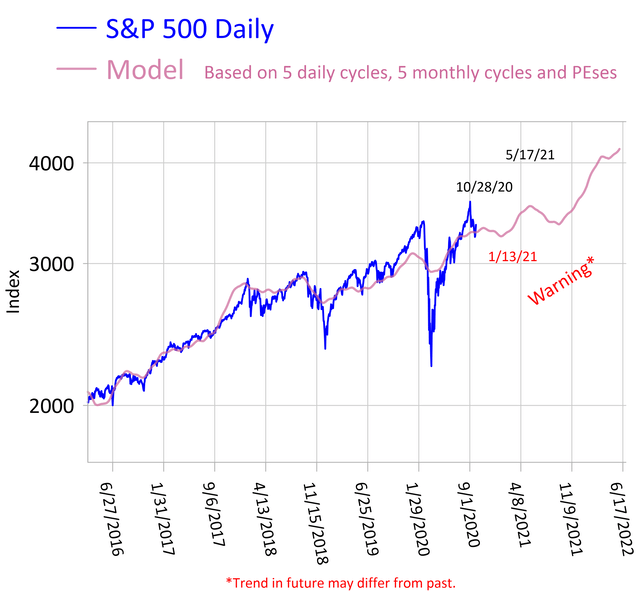 The chart 1 model points mildly higher until 10/28/2020. However, Monday’s close is above this October high. So, I am neutral on the S&P 500 for now. If the market rallies much I will likely get bearish around Halloween.

The model suggests a low in mid January. Followed by a robust move up to about mid 2021. A bear market or correction is suggested for the second half of 2021. Followed by what I expect to be a more substantial Bull market peak in 2022.

This is a change from the 9 cycle model in the last article where I was expecting a down trend to continue into winter. The model change pulled back my bearish sentiments. The change mainly came from correcting the cycle algorithm that incorrectly kept the length of period in a cycle from rising to its correlation maximizing length. The longest cycle now runs 63 years between one top and the next, up from 56 years (Chart 2). 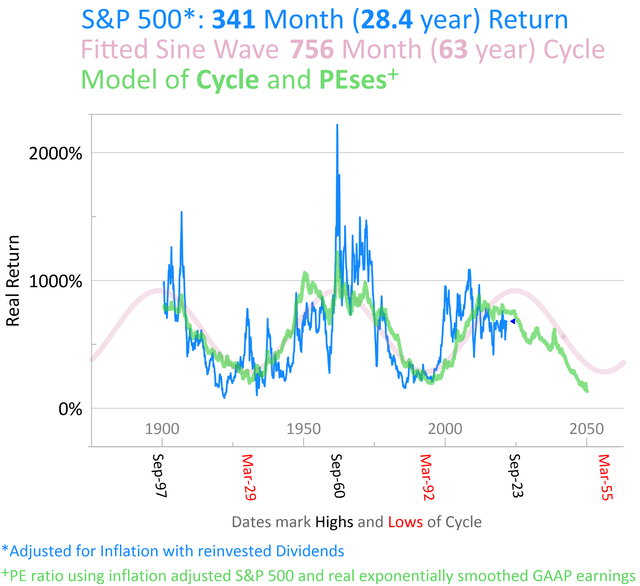 The last point on the blue line shows the S&P 500 returned 681% after inflation and dividends over the last 341 months (28.4 years). Since monthly return is based on average closing price during a month the last two days of September are unlikely to materially change the return from 681%. The model in green had estimated 757%. With the green line above the last point on the blue line for the next 5 years the model is consistent with a robust bull market sometime in the next few years. However the long term out look is dismal.

The last point on the green line estimates the 341 months ending February 2049 will return 133%, which would be about a 3% annualized real return between now and then. This would be less than half the 6.6% long run real average return.

If the weak forecast return actually occurs it might be from stagnant long term price gains, high inflation or both. 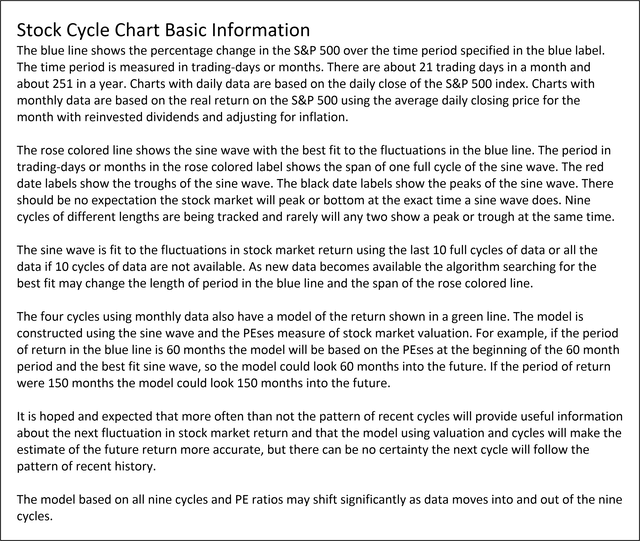 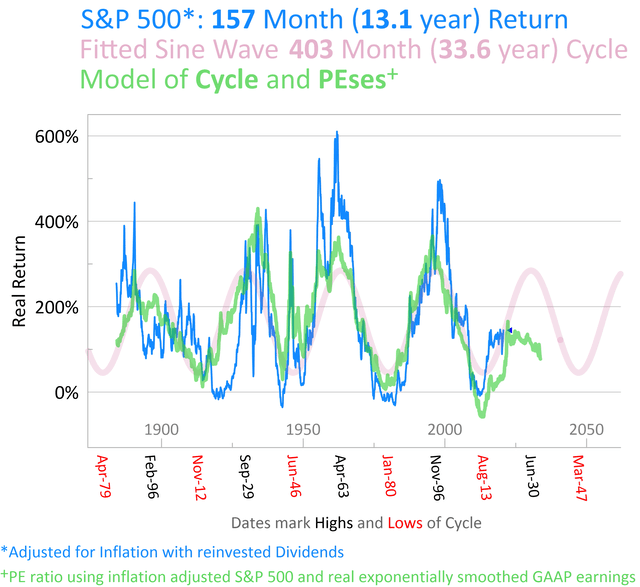 The next shorter monthly cycle (chart 4) is the one that got added to make the model in chart 1 a ten cycle model rather than nine cycles. 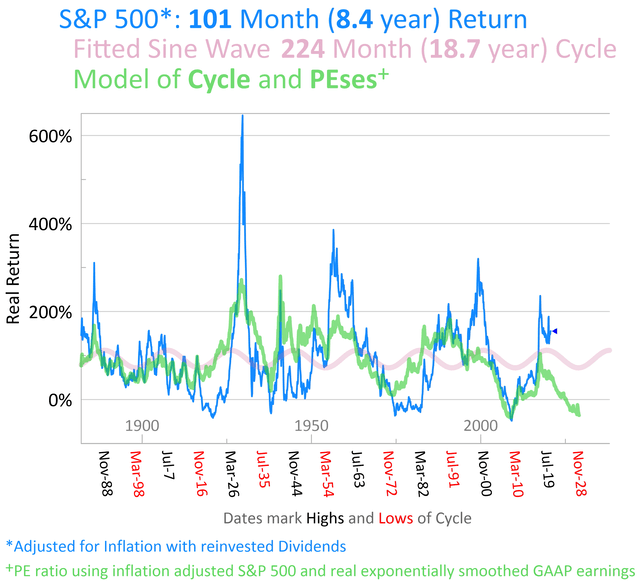 The 101 months ending September returned 155% well above the green model which estimated 48%. The last point on the model estimates the real return index will lose 35% in the next 101 months ending February 2029.

This cycle (pink line) in chart 4 does not have a particularly strong correlation, but the green model that includes the PEses is robust and improves the fitted correlation of the model in chart 1. The period of return at 101 months fits in a narrow window where the algorithm does not move the cycle up to the next longer cycle or down to the next shorter one. 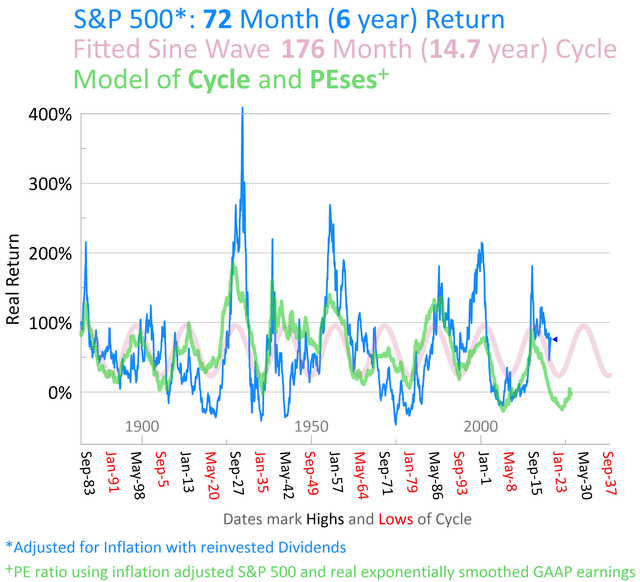 The 72 months ending September returned 76%. The model estimated -3%. The model hits a low point -25% in January 1924. We might look for a bear market bottom around then. 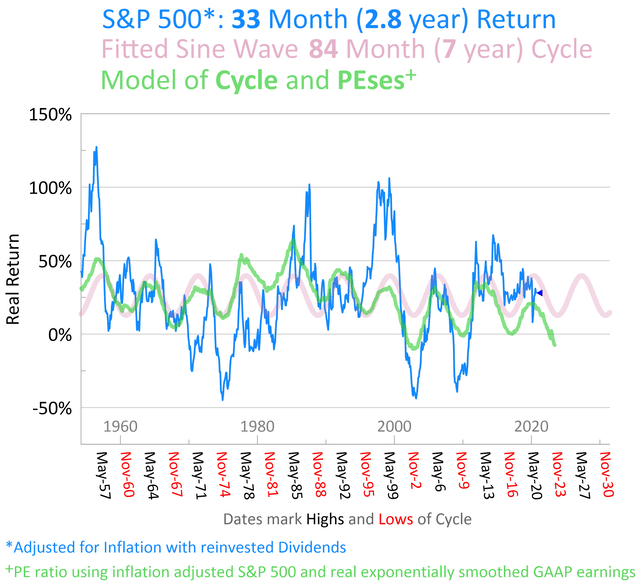 Collectively the five monthly cycles create a monthly model (chart 7) that suggests a significant top in July 2022, which is a month after the forecasts stops in the model on chart 1. 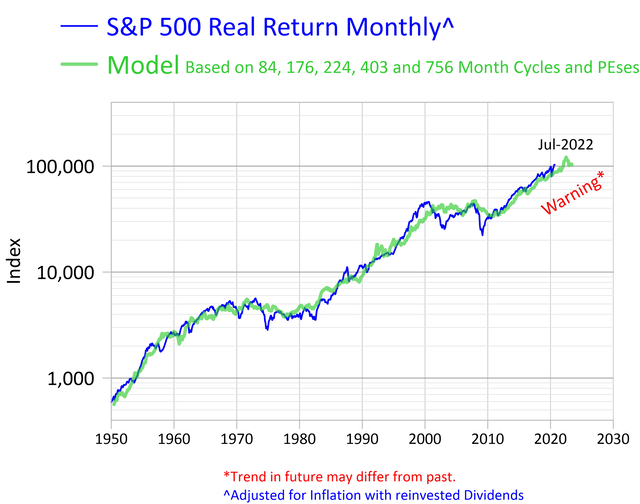 The monthly model suggests the total real return index will rise above 121,000 in 2022, which will correspond with the S&P 500 going above 4,000. In the last 33 years the total real return index has risen at about a 7.6% rate which is about the 70 percentile for 33 year periods since 1870. I am expecting this outsize return to give way to much lower long term returns after 2022.

We’ll update the 5 cycles using daily data in the next article.

The next few years should be a volatile ride.

Additional disclosure: There is no guarantee analysis of historical data their trends, cycles and correlations enable accurate forecasts. The data presented is from sources believed to be reliable, but its accuracy cannot be guaranteed. Past performance does not indicate future results. This is not a recommendation to buy or sell specific securities. This is not an offer to manage money.