Protests erupt in Beirut as fury against Lebanese authorities grows

Security forces tear gassed protesters trying to reach the parliament building in Beirut on Thursday night as anger against government incompetence raged in the aftermath of the explosion which devastated the city and killed at least 150 people.

In streets darkened by electricity failure, protesters chanted “revolution!”, the slogan which came to represent the mass demonstrations over official corruption and inequality that erupted last October.

“What are they protecting?” Aya Majzoub, Human Rights Watch’s Lebanon researcher, wrote on Twitter after security forces used tear gas against the crowd. “A hollow, destroyed building that used to be inhabited by politicians that have lost all credibility?”

Earlier on Thursday, French president Emmanuel Macron toured battered neighbourhoods where volunteers were shifting rubble and sweeping broken glass. His appearance on the streets of Beirut was a stark contrast to Lebanese leaders who have mostly not ventured out in public, their absence highlighting the gulf between the political elite and citizens affected by the explosion.

People are enraged not just by official failures which allowed the catastrophe to happen — the 2,750 tons of explosive chemical left at Beirut’s port for six years — but by the lack of state support in the aftermath of the disaster. Most relief efforts have been locally led, and there has been scant government advice or leadership.

And while the cabinet has announced a probe into the blast, few trust the government to conduct an investigation into its own failings. Human rights groups have called for an independent, international investigation.

According to a spokesperson for the prime minister’s office, “all officials who knew about the ammonium nitrate” which caused the explosion have been placed under house arrest and subject to a travel ban. That list includes customs officials, judges and former ministers, all of whom have been revealed to have had knowledge of the ammonium nitrate store, but the spokesperson said they could not confirm individual names. 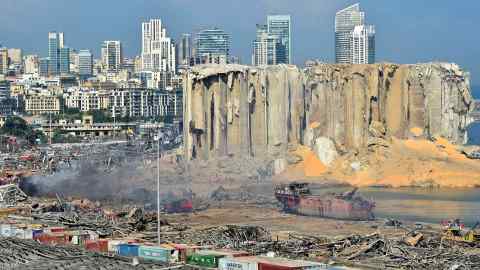 Meanwhile, Lebanon’s central bank has frozen accounts belonging to the head of Beirut’s port, the director of Lebanese customs, and five other officials, according to an order by the Banque du Liban’s special investigations committee circulated online.

Politicians who have appeared in Beirut — notably former prime minister Saad Hariri and current justice minister Marie-Claude Najm — have been met with anger. While talking with clean-up volunteers on Thursday, Ms Najm was shouted at and pelted with water.

Ms Najm is from the new cabinet formed in January after Mr Hariri’s administration resigned in the face of the anti-government protests.

The current cabinet is tasked with steering Lebanon through a vicious economic crisis, but has been unable to stop the freefall, which the government itself expects will leave 60 per cent of Lebanese below the poverty line by year’s end.