Proponent of “Conscious” Capitalism Slammed By Workers Because of Nutty Proposal 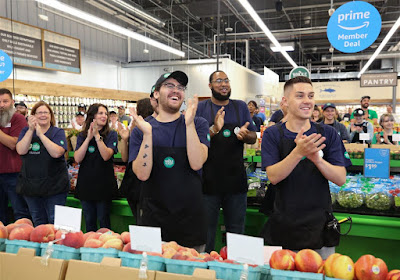 Whole Foods co-founder and CEO John Mackey is a proponent of something he calls “conscious” capitalism. He wrote a book about it, Conscious Capitalism: Liberating the Heroic Spirit of Business.

From my perspective, it does nothing but distort key features of capitalism by promoting in a foundational sense the ignoring of price signals in favor of acting against price signals in some kind of social justice manner.

The book is filled with new age-type happy talk:

He tells his readers that companies “should not be judged purely on financial results.”

That, “conscious businesses pay their own frontline team members well, often significantly above the industry norm, and are generous with benefits.”

So in the face of the COVID-19 panic, what does the guru of conscious capitalism and generous benefits do?

He wrote his employees, where he is still CEO after the firm was taken over by Amazon, and suggested his healthy employees to donate their vacation days to sick employees.

On Wednesday, Whole Foods CEO John Mackey sent out an email to grocery store employees with a list of benefits and options for those who fall sick during the coronavirus pandemic.

Among his six suggestions was an option for employees to “donate” their paid time off (PTO) to coworkers facing medical emergencies.

Employees who test positive for COVID-19 are allowed two weeks of paid time off. After that, it appears the king of conscious capitalism wants to have healthy employees bailout sick employees.

READ ALSO  How Did Low-Volatility And Equal Weight ETFs Do In The Crash? Decidedly Mixed

This, apparently, is not inspiring team members with conscious capitalism. Here is just one example.

“Considering [Whole Foods] is a billion dollar company, I think it is selfish asking the retail workers to figure it out within themselves,” a Whole Foods cashier wrote to Motherboard in an email. The cashier spoke to Motherboard under the condition of anonymity because they fear retaliation from Whole Foods. “The response from [Whole Foods and Amazon] has been quite poor, being a front end cashier I feel like we are the most exposed to the situation…Some of us have sick family members [whose] immune system is weak and [it] could be quite dangerous if they catch this virus.”