Private equity gags on its own medicine in contentious debt battles

Home Financial news Private equity gags on its own medicine in contentious debt battles
2020-07-302020-07-30By finanz.dk

The barbarians are crying foul. For decades, private equity firms have been seen as the aggressive interlopers, using sharp practices to prevail in brutal corporate contests.

Now that is being turned on its head. In a wave of company restructurings following the coronavirus crisis, Apollo Global Management and other traditional private equity groups have appealed to the courts to complain about the behaviour of rival creditors.

It has not gone unnoticed that the legally aggressive tactics they are challenging are those they may themselves have deployed in the past.

Reaching for new funds to see it through the pandemic, mattress company Serta Simmons Bedding took $200m in new loans from a slim majority of creditors who, in addition to putting in the fresh money, saw their existing loans move up in seniority in the capital structure. Holders of the other 49 per cent of Serta’s loans, including Apollo, effectively had their claim on the company’s assets become subordinated to the favoured debtholders.

Apollo sued, alongside other disgruntled creditors including Angelo Gordon and Gamut Capital. In a tart response, Serta, owned by private equity group Advent International, noted that the claimants had “sponsored and participated in numerous transactions structured similarly to this transaction”.

The flashpoints are coming thick and fast, as the pandemic pushes more highly-leveraged companies to the brink. Earlier this month, AMC Theatres, the troubled cinema chain, announced a rescue financing led by Silver Lake Partners, the private equity firm that already owns $600m of AMC convertible bonds. A group of senior lenders, including Apollo, have objected to the new financing and made their own competing proposal, believing the Silver Lake package was inferior for AMC as well as undercutting their own claims on the chain.

Apollo has also been a part of a creditor group calling for an independent “examiner” to probe corporate governance at the private equity-backed energy company Sable Permian Resources.

The scrambling of traditional roles has led to private equity groups taking a different position in such battles. Since Leon Black co-founded the group in 1990 from the ashes of junk bond house Drexel Burnham, Apollo has consistently taken opportunistic positions in distressed debt, trying to profit by trading in loans and bonds of struggling companies.

But today, a majority of Apollo’s assets under management come from a $216bn debt arm, which lends to companies and buys ordinary corporate debt. Blackstone’s debt unit, GSO Capital, itself now exceeds $130bn in assets.

Steven Kaplan, a private equity expert at the University of Chicago, said this creates contradictions that are increasingly apparent among large, diversified alternative investment firms.

“It is a very natural development given the increased amount of funding to alternatives and the overlap of buyout, credit and hedge funds in the distress space,” he said.

Apollo’s rivals are enjoying a moment of schadenfreude. At one point, the private equity group had such a reputation for playing rough with creditors of its portfolio companies, that it began to worry that traditional debt buyers would be wary of financing its future buyouts and in 2015 Apollo embarked on what investors dubbed an “apology tour”.

Even as private equity pioneers have drilled deeper into credit, some large hedge funds are expanding in the opposite direction. Elliott Management, founded by ex-lawyer Paul Singer, is best-known as a ferocious distressed debt investor, unafraid to take on big companies or even the country of Argentina. In the Caesars case, for example, where it owned $1bn worth of debt, it had filed a lawsuit accusing the Caesars’ co-owner, Apollo, of “unimaginably brazen corporate looting” for selling casinos that creditors including Elliott believed had belonged to them. (Elliott eventually settled with Caesars and Apollo).

Since then, Elliott has become a primary lender into technology buyouts. It has even established its own private equity unit, Evergreen Coast Capital, that specialises in tech LBOs — and now finds itself in the crosshairs of credit hedge funds that bought one of its portfolio company’s debt.

Travelport, a booking software company acquired by Evergreen and Siris Capital, has been accused by existing lenders of “asset stripping” after it secured $500m in debt financing from its two owners to ease a liquidity crunch, in a deal that moved intellectual property collateral away from other creditors.

Travelport selected the Elliott/Siris financing over a proposal from existing creditors including Blackstone’s credit arm, GSO, and, in the face of grumbling from the aggrieved side, Elliott has asked a New York state court to affirm that the transaction is proper.

Ironically, Blackstone had previously owned Travelport, taking money out of the company in 2007 through a dividend recapitalisation that sparked a clash with bondholders in 2011. 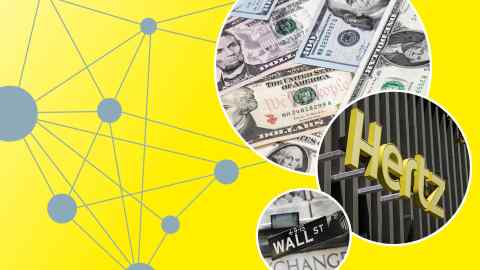 Some long-time debt market participants see the current rash of disputes as par for the course, even if the players find themselves in unusual roles. Debt investing has increasingly become an accepted way, alongside traditional private equity, for savvy investment firms to use existing skills to take control of companies.

But there are reasons to think the current economic downturn could result in increasingly aggressive tactics from private equity owners seeking to protect their companies.

Some insiders note fundamental changes in the ecosystem beyond just the evolution of asset managers. Big Wall Street banks are no longer large holders of leveraged loans, and are also less active as loan “agents”, the administrator for paper who sometimes act as mediator or traffic cop.

Also different this time, debt lacking onerous covenants has soared. According to data compiled by Moody’s, its index of high-yield bond covenant quality has been below its “weakest-level protection” threshold since late 2014.

“There is a lack of discipline in the loan market and it has spawned a new era of uber-aggressive transactions,” said one top financing lawyer. “Private equity firms have debt arms that are subject to the whims of other private equity firms. You can’t really have sympathy for any of them.”