As the oil and gas market cools down after a rampant week, many are still looking for entry positions into the sector. While I would advise caution at this point, that doesn’t mean you can’t identify companies to keep an eye on. This is where Precision Drilling (PDS) comes in. The company has always been under attack due to the large debt, but reducing it and quickly has been management’s top priority for a couple of years and they continue to deliver on that. All this while rig counts are hitting levels last seen in mid-May, and the price of oil has increased to $45 US, could be good news for Precision Drilling and other oil and gas service companies.

*All $ values are in $CAD unless otherwise stated*

Founded in 1951 in Calgary, Alberta, Precision Drilling has been around the block a couple of times. Long-time shareholders will remember the days in the early 2000s when this was one of the hottest stocks out there. After the recent split, it would be the equivalent of an all-time high over $760 per share. Precision Drilling is an oilfield services company that provides oil and natural gas drilling and related services. The company relies on two main segments. 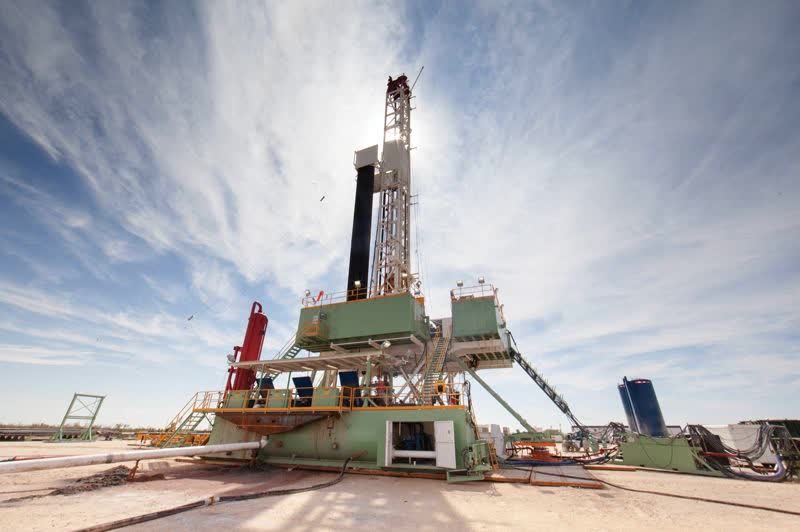 The first being Contract Drilling Services. This refers to performing onshore well drilling services to exploration/production companies. The company operates in land drilling, directional drilling, as well as turnkey drilling equipment and services.

The second segment is the Completion and Production Services segment. This has to do with providing service rigs for well completion, workover, abandonment, maintenance, and re-entry preparation.

As per the October Investors Presentation, Precision Drilling currently has 227 drilling rigs in action. (109 in Canada, 105 in the US, and 13 Internationally) They also have 198 service rigs on the go as well. (189 in Canada, 9 in the US)

How Is The Balance Sheet?

Precision Drilling set out to “generate strong free cash flow and utilize $100 million to $150 million to reduce debt in 2020”. As of October, the debt had been reduced by $125 million, with expected cash savings from their aggressive cost management plan expected to come in around $150 million. The original expectation was only $100 million.

Precision Drilling is currently sitting on about $700 million in liquidity. It appears as if Capex for 2020 will come in around $48 million, which is quite the drop off from 2019 where it was $162 million. The company expects to turn in positive free cash flow in every quarter for 2020, which is impressive given the market we have seen for companies like Precision Drilling. The debt still remains one of my top concerns, but I can recognize the effort that Precision Drilling is putting into reducing it. They clearly recognize it as a potential issue and are doing their best to get out in front of it as they have reduced the debt by $504 million since 2018 alone. The image below outlines what the company has done, and continues to do to get the balance sheet back under control. Saying it is one thing, walking the talk is another. Give credit where credit is due. 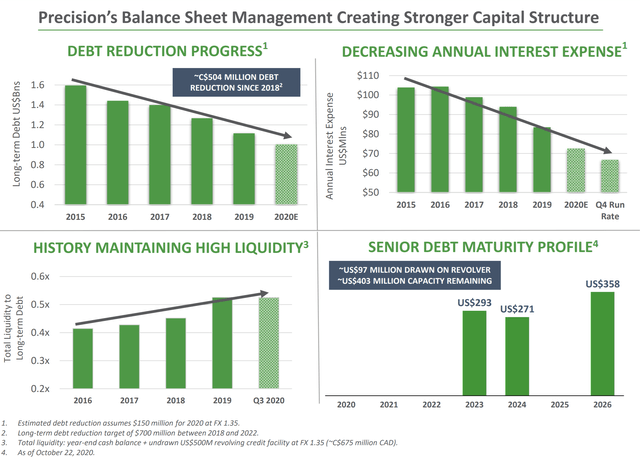 What Is Driving The Company?

There is no question that in a tough oil market like we have seen that being a services company can be extra tough. Something a lot of oil analysts take a look at and track outside of general inventory levels is the rig counts. For a company like Precision Drilling, this is even more important. If there are no rigs, it makes working tough. With the data that was produced today, we can see that the number of rigs is increasing, at least domestically. This is the highest level we have seen since mid-May. Yes, this is directly tied to the price of oil.

Clearly, there is still a long way to go to get back to levels we saw a year ago, but we will take any positive we can find these days. There have been several drilling companies that have gone under due to the market conditions, which was why the share price of Precision Drilling has suffered so much over the last year, especially through the early stages of the oil price collapse. The rebound in the last couple of weeks is also due to the price of oil increasing on positive reports as the price looks to stabilize around $45 US.

To get through this and capitalize as much as possible on the environment, Precision Drilling is looking to operational excellence to lead the way. The company is leaning on its technology when it comes to the Super Series Rigs and Alpha Rigs. In the US, the company currently only has about 8% of the market share diversified across Lower 48, and active in all unconventional plays. They believe Alpha Technologies will continue to drive growth in the US market. As for where the majority of their work comes from up in Canada, Precision Drilling owns just under 35% of the market which is quite substantial. This works out to ~$1.9 billion in free cash flow since 2010. CEO and President Kevin Neveu had this to say:

As we look forward to the prospect of increasing activity with our current structure, we believe we can triple rig utilization with only nominal increases in fixed cost and G&A expenses. The operational torque and Precision’s earning capability has never been better and we will demonstrate that earnings torque as activity improves in the coming quarters.

At the end of the day, as long as management can deliver on their deliverables in terms of reducing debt and maintaining strong operational excellence, then the company will move with the price of oil. I do not think Precision Drilling is at risk of going under at this time. However, that could change if oil demand collapses once again and the company begins to see a decrease in free cash flow.

There is no question there is value here. Obviously, that comes with the risks mentioned earlier. Taking a look at Seeking Alpha’s Quant rating, we can see that the stock has earned a rating of A-. This is a total value play at current valuations. Looking below we can see that based on 10-year, levered cash flows the stock is over 50% undervalued where it is today. This is very attractive for this reason alone. It is not all that often you see a stock this undervalued, with a positive rating from Seeking Alpha.

The stock recently did a 1/20 reverse split. This will make it more attractive to some firms given that the stock is now worth just under $20 a share. Since the split, the stock has run just under 40%. A lot of that can be thanked to the current oil environment as mentioned earlier.

Technically speaking, I want to start with the infamous 200-day moving average. Looking below we can see the cap this has had on the stock over the last couple of years. The break we saw last week is very bullish, and the follow-through has been great. I would like to see a positive backtest while avoiding what we saw in early 2019 which is circled on the chart below. I do think this is all depending on what happens in the oil market. There are a large number of stocks in the sector that have similar charts.

Where the stock sits as of Wednesday, it is a crucial spot. The stock is either going to continue to move on and grow into the ’20s or dive back down to the low teens. Looking below we can see the previous support and resistance at this point – which explains why the stock has gotten a bit choppy here over the last few days. This could go either way at this point. If you do not have a position, it could be worthwhile to wait for the stock to make a move here.

If you do have a position, I would be moving the stop up to ~$15.50. Looking below we can see that not only does this fall right below the 200-day moving average, but it also falls below what was a previous cap on the stock. The reason for going slightly below is so you do not get washed out on a fakeout.

If you have been long over the last few months, I would even look at taking some profits at this point. Money in the account never hurt anyone. No harm in doing that after a run like the one we just witnessed. The stock is up over 270% off the lows in March.

As you can see, there is a lot to like about what Precision Drilling is doing, but it isn’t risk-free. This may not be a stock for the faint of heart. Do not lose sight of the fact that the company did just do a 1/20 reverse split. If the company can continue to reduce its debt while growing free cash flow, they should be just fine but they have a long way to go to earn the trust of many, but they are putting in the work which one can admire. If you are looking for an oil services company, I think this is one of the better options out there. Stay safe!