A man suspected of killing a supporter of US president Donald Trump during clashes in Portland, Oregon, was shot dead by law enforcement officers trying to apprehend him on a murder charge, said the US Marshals Service.

Michael Forest Reinoehl was wanted by authorities for allegedly killing Aaron Danielson, who clashed with civil rights protesters in the city last week amid a stand-off between pro-Trump demonstrators and Black Lives Matter activists. Reinoehl was shot on Thursday evening by officers who were watching him as he left an apartment in Olympia, Washington.

A statement from the US Marshals Service said officers attempted to “peacefully arrest” Reinoehl. “Initial reports indicate the suspect produced a firearm, threatening the lives of law enforcement officers,” the marshals’ office said in a statement.

The Thurston County Sheriff’s office confirmed that Reinoehl, who was armed with a handgun, was shot after he left an apartment building and got into a car. Lieutenant Ray Brady, of the sheriff’s office, said it was still unclear precisely why officers had fired shots, or if Reinoehl had fired his weapon. His office is leading an investigation into Reinoehl’s death.

Portland has been the scene of protests and unrest for months, sparked by the killing of George Floyd by a police officer in Minneapolis, Minnesota, earlier this summer. The demonstrations have at times descended into violence and vandalism, resulting in dozens of arrests and sparking the anger of Mr Trump and congressional Republicans.

Mr Trump has pointed to the eruption of violence at protests in Portland and elsewhere in the US as a sign of anarchy in large cities chiefly run by Democrats, making a return to law and order a core theme of his re-election campaign. 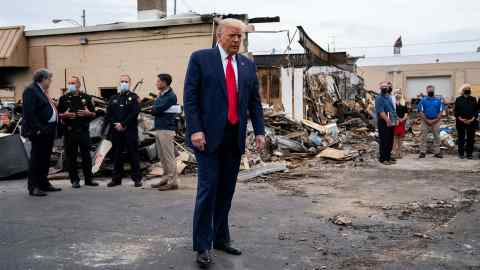 His increasingly incendiary rhetoric has come as tensions between civil rights protesters and rightwing groups have escalated in a number of cities where demonstrations over police violence have been taking place.

This week, both Mr Trump and his Democratic challenger, Joe Biden, visited Kenosha, Wisconsin, a small Midwestern city that was rocked by the shooting of Jacob Blake by a white police officer last month. During the ensuing demonstrations in the city, two people were killed. A teenager, Kyle Rittenhouse, has been charged with the shootings.

In Rochester, New York, seven police officers have been suspended in connection with the death of Daniel Prude, who is black, after footage of his arrest in March was released this week. The New York attorney-general’s office is investigating the incident, in which police officers placed a “spit hood” over his head and appeared to pin him on the ground. Prude later died of asphyxiation.

A number of protesters in Rochester were arrested late on Thursday and early Friday, local media reported.

Previous PostQuantumScape: A Next Generation Battery Developer For The Rapidly Growing EV Market Goes Public Via SPAC (NYSE:KCAC)Next PostThis Drop In Oil Prices Is Only The Beginning