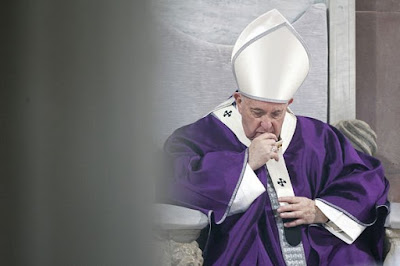 The Jesuit-schooled, capitalist-hating Pope is on a new rampage via a new encyclical.

He titled his encyclical “Fratelli Tutti” (Brothers All) and it gave the impression that he spends more time reading Karl Marx than the bible.

In the document, the Pope stated that the coronavirus pandemic has proven that the “magic theories” of market capitalism have failed.

“Aside from the differing ways that various countries responded to the crisis, their inability to work together became quite evident,” Francis added as he sounded more like a social philosopher than a religious leader. “Anyone who thinks that the only lesson to be learned was the need to improve what we were already doing, or to refine existing systems and regulations, is denying reality.”

He then went entirely off the deep end.

He cited the grave loss of millions of jobs as a result of the virus as evidence of the need for politicians to listen to popular movements, unions and marginalized groups and to craft more just social and economic policies.

This indicates he does not appear to understand that the job losses were the result of draconian shutdowns ordered by government officials for a virus that does not have severe consequences for any but the unhealthy extreme elderly.

You would think the Pope would say something about compassion and tending to the elderly rather than babbling about the science of economics, a science which he clearly does not understand.

But his focused remained on an uninformed understanding of economics with what appeared to be a dose of the mad social justice warrior thinking:

“The fragility of world systems in the face of the pandemic has demonstrated that not everything can be resolved by market freedom,” he wrote. “It is imperative to have a proactive economic policy directed at ‘promoting an economy that favors productive diversity and business creativity’ and makes it possible for jobs to be created, and not cut.”

And just to emphasize that he does appreciate the commune style of life, which if practiced on a large scale would lead to the deaths of millions, over free markets, he rejected the concept of an absolute right to property for individuals, stressing instead the “social purpose” and common good that must come from sharing the Earth’s resources.

And then he went on to attack a confused version of free markets. “Neo-liberalism simply reproduces itself by resorting to magic theories of ‘spillover’ or ‘trickle’ — without using the name — as the only solution to societal problems,” he wrote. “There is little appreciation of the fact that the alleged ‘spillover’ does not resolve the inequality that gives rise to new forms of violence threatening the fabric of society.”

The Pope should really give up the throne and do old man white rap songs in the interest of the common good. He has no idea how to be a pope.