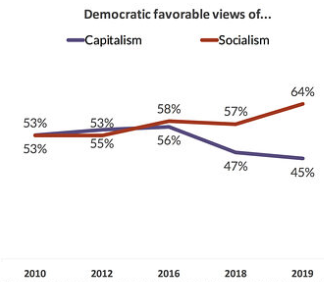 Fully 50% of Democrats say that President Donald Trump has made them “like capitalism less,” while 44% say he has had no impact on their perceptions. 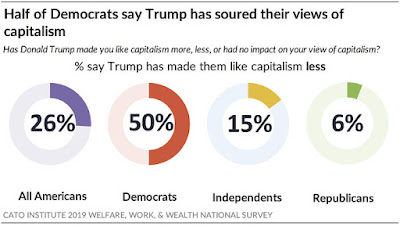 Immediately after the election on November 10, 2016, I wrote:

There will be opposition to Trump but it will be coming from the left, not the Trump right.

The left is all about expanding the state. Thus, it will be very difficult to reach out to these people and present state shrinking anti-Trump ideas. They are a perfect target for the socialists…

The socialists are going to experience a boom in followers under Trump.

Thus, neither the left nor the right is going to be open to libertarian ideas at the present time.

And so it has come to pass. The masses, especially the Democrats, believe that Trump is a representation of what capitalism is about. He doesn’t have a clue and neither do the masses but they are moving in a socialist direction. Not good.