‘Politics has become black and white’ — how Americans are polarised

For a brief spell on Wednesday afternoon, the political divide tearing America ran through Peddler’s Village, a twee ramble of gift shops in bucolic New Hope, Pennsylvania, where Christmas wreaths are always in season and scented candles are abundant.

There, Frank Behlert, 71, diabetic and enraptured with Donald Trump, was blaming the liberal media’s hateful treatment of the president for the country’s polarisation as he tended his memorabilia store, Colt’s Sports Collectibles.

Why wouldn’t they — the media — publish stories about what he alleged was the Biden family’s corruption, he demanded? He turned to Marcos Carballal, 21, a University of Pennsylvania student who had wandered into the shop and had the temerity to express sympathy for Joe Biden: didn’t universities teach students these days about the dangers of socialism, Mr Behlert asked?

“I’m not here to invalidate anyone’s opinion or their lived experience,” Mr Carballal replied in campus patois. But he saw things differently: “It’s a growing populist movement, and Trump is kind of an opportunist.”

They parted soon after, two more Americans not merely engaged in a disagreement about politics but seemingly inhabiting two different worlds, separated by age, education and their attitudes about social justice, the economy, race, patriotism and much else.

After the most bitter US presidential contest in recent memory — one that featured claims of voter suppression and voter fraud and is now headed for litigation — those divides appear deeper than ever.

In urban centres including New York City, enraged demonstrators confronted police on Wednesday night as they demanded that all votes be counted. In Arizona, a crowd of more than a hundred Trump supporters — some armed — surrounded a voting centre, prompting police to send reinforcements to protect election workers.

The opposing sides came face to face on Thursday morning outside the Philadelphia Convention Center, where workers were toiling to count a haul of mail ballots that might decide the White House. “Count every vote!” screamed Biden supporters. “We want a tax cut!” a Trump woman hollered back.

So enraged was Laura Keane, a mother of three and Biden voter, that she looked ready to charge the Trump crowd even though she was — incongruously — clad in the workout attire of the middle-aged jogger. “There’s moral values at stake in this election,” Ms Keane said, trying to explain the depth of her feelings. The mood deteriorated as the day dragged on, with a beefy Trump supporter at one point leaning over a barricade and daring a reedy voting rights activist to punch him.

If you think coronavirus was the biggest issue, you asked for a mail ballot. If you thought it was the economy, you went in person

Such scenes renew the same question that social scientists, politicians, the media and ordinary Americans have struggled to answer at least since Mr Trump’s surprise election victory four years ago: what accounts for the country’s rancorous tribal divisions? And is there any leader who would be able to heal those divisions in order to govern effectively?

Heading into election day, Democrats drew encouragement from opinion polls predicting a rising blue tide that would soon give them control of the government and validate their world view after four years under Mr Trump. They were stunned on Wednesday morning to learn otherwise.

“It’s astounding, it’s disappointing, it’s infuriating — it’s all that,” Michael Nutter, the former mayor of Philadelphia said of the reality that so many of his fellow citizens had voted for a president whom he accused of inflaming racial tensions and neglecting Americans — particularly poorer and blacker ones — in the pandemic.

Mr Nutter had hoped that the trauma of coronavirus would instil some sense of national solidarity — a feeling that “we have to look out for one another.” Instead, he concluded: “The blue wave can’t overcome white supremacy and racism.”

For a President Biden to govern, he argued, it would require not merely reaching across the aisle but “across the culture”.

While Mr Trump ran a campaign that was unapologetically focused on his base, Mr Biden tried to present himself as a leader of the entire nation. His success in Georgia offered some encouragement. Still, much of it appeared to be built on increased turnout in urban areas. In the Trump heartlands, few voters were persuaded to change their minds. The two tribes even placed their votes differently.

“If you think coronavirus was the biggest issue, you asked for a mail ballot. If you thought it was the economy, you went in person,” said Robin Kolodny, chair of the political science department at Temple University in Philadelphia.

Should Mr Biden prevail — as looked increasingly likely by Friday — she predicted he would appoint a few prominent Republicans to his cabinet. With time, that might ease the rancour, she said.

William Rosenberg, a political scientist at Drexel University, was less hopeful. “We have to recognise that about 45 per cent of the American public supports — and even really loves — Donald Trump,” he said. With those voters’ representatives gaining seats in the House and the Senate, he did not expect the levers of government would be geared for compromise.

“What happened to American politics over the last 20 to 30 years is it’s become much more liberal and much more conservative, with fewer people in the middle,” Prof Rosenberg said. Mr Trump, he observed, had revelled in divisiveness.

As ever in America, race is entwined in the story. It was at the forefront of the contest in Philadelphia — even more so after Walter Wallace, a black man with mental health issues, was shot dead by police a few days before the vote, igniting protests across the city. As people streamed to the polls on Tuesday, several black voters in the city insisted it was their enmity for Mr Trump — not the appeal of Mr Biden — that brought them.

But in Bucks County, where Peddler’s Village is located, race was in the background. The overwhelmingly white county is an hour’s drive from Philadelphia and features commuters as well as country roads that wind around postcard-worthy horse farms. Its voters seemed more inclined to talk about the economy and the plight of small business.

When Mr Behlert at Colt’s Sports Collectibles spoke of race, it was in the context of the economy. “What the heck more can he do?” he said of Mr Trump, noting his success at lowering unemployment rates for black men.

On the patio at the Free Will tap room, a short stroll from Colt’s, a trio of young women despaired that the binary politics on offer this election season failed to accommodate the contradictions and complexities of their own lives.

“Politics has become black and white and yet our lives [are not],” said Danielle Bloomfield, 30, a first-generation Colombian American who works at insurer GEICO. 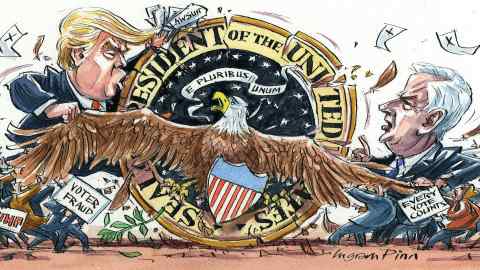 Her friend and co-worker, Brandi Beuschel, 36, noted that her husband was a policeman as she justified her support for the president. “I do agree with the wall,” she added in an almost apologetic tone, referring to the president’s proposed wall on the southern border that is the bane of progressives.

The women seemed to appreciate Mr Trump’s raw style but also wished that he would occasionally “shut up,” as Ms Beuschel put it. They credited him with supporting small business but, somewhat confusingly, viewed Mr Biden as a better steward of the economy. Their fellow Americans, they agreed, seemed to be losing the ability to tolerate disagreement.

“Before the pandemic, society was in a better place,” Ms Van Sciven offered.

How does the country move forward from here? How would a leader bind up the wounds? Is this a fever that will eventually run its course — or something more fundamental?

Like others, they had few clear answers — only a conviction that America needed to be healed. “Whatever happens,” Ms Bloomfield said, “we have some recovering to do.”