Poland’s ruling rightwing coalition is on the verge of collapse, with senior members of the Law and Justice party declaring that it was prepared to form a minority government and call a new election, just a year after the party’s last victory in a parliamentary poll in the autumn of 2019.

Long-running talks over a mooted government reshuffle were suspended on Thursday afternoon, after the United Poland party, led by justice minister Zbigniew Ziobro, declared that it would oppose two key parliamentary bills championed by Law and Justice.

On Thursday night, Law and Justice pushed ahead with a vote on one of the bills, a proposed animal rights law. If passed, the bill would ban fur farming and animals in circuses, as well as limit the tethering of dogs.

An earlier version of the legislation included restrictions on the ritual slaughter of animals — a sensitive issue for religious minorities and the Polish meat industry alike — although this clause was dropped ahead of Thursday’s vote.

As well as angering Polish farmers, the bill exposed a major ideological and factional rift within Law and Justice and the broader Polish right. It has been championed by Jaroslaw Kaczynski, the party leader, who represents a leafy Warsaw constituency and is renowned for his love of cats. But the legislation has attracted fierce criticism from religious conservatives and those who represent rural voters, a key component of his governing coalition.

“If we decide that animals are more important than people, it will mean the end of Christian civilisation,” Poland’s agriculture minister Jan Krzysztof Ardanowski told a radio station last week.

Seventeen Law and Justice MPs voted against the bill and now face possible expulsion from the party. 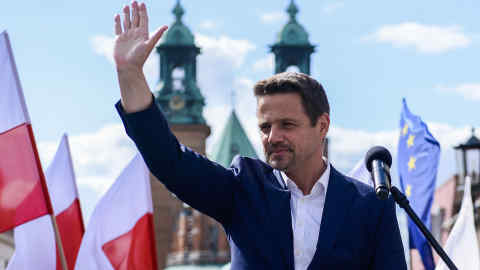 “It’s not the end of the world, but it is the end of the coalition and probably a minority government,” Marek Suski, deputy leader of the Law and Justice caucus in the Polish parliament, told radio station RMF on Friday morning. “Our former coalition partners should clear their desks.”

Poland’s ruling coalition, known as “United Right”, is dominated by Law and Justice, but relies for its majority on MPs from United Poland and the Agreement party of former government minister Jaroslaw Gowin.

Tensions surrounding the planned reshuffle have been brewing for months, exacerbated by questions over who will succeed Mr Kaczynski as the undisputed leader of the Polish right. Prime minister Mateusz Morawiecki, Mr Ziobro and Mr Gowin are regarded as the leading candidates.

But the central drama of the present crisis has been the confrontation between Mr Kaczynski and Mr Ziobro. The latter was formerly a member of Law and Justice who was thrown out of the party in 2011.

Mr Ziobro, a hardline conservative, has been increasing the pressure on his senior coalition partners for several weeks, proposing a series of radical policies. These include forcing NGOs to declare any foreign funding and withdrawing Poland from the Istanbul Convention on preventing violence against women.

According to reports in the Polish press, Mr Ziobro has been pressuring Mr Kaczynski to allow him back into Law and Justice. This would allow the justice minister to consolidate his claim to future leadership of the party. But Mr Kaczynski is understood to regard Mr Morawiecki, a relative moderate, as his preferred successor.

Now tensions over the animal rights bill, and a separate proposal to give legal immunity to officials implementing the government’s response to the coronavirus pandemic, have brought matters to a head.

There were signs on Friday that the talks could yet be resuscitated, with MPs from both United Poland and Agreement suggesting they were not yet ready to give up on the prospect of a reconciliation.