On October 21, Avangrid (AGR) and PNM Resources (PNM) announced their plan to merge PNM Resources into Avangrid in an all-cash offer of $50.30 for each PNM share.

That makes sense if you measure PNM stock through the eyes of a stock investor, but with that announcement, PNM became a bond-like proxy until such time as the merger is completed.

Since the stock went ex-dividend on October 30, PNM’s share price has drifted downward nearing the $49 level. With the $50.30 offer still valid, that gives a buyer at current prices a differential of around $1.20 per share, or 2.4%, not including dividends expected between now and when the deal is complete by the end of 2021.

In a normal year, that sort of yield would not be exciting even to bondholders, but these are not normal times since bond yields continue to be suppressed as the Federal Reserve continues to intervene in the fixed income market to hold down interest rates.

Given the general hunt for yield, it pays to look in other directions for yield, and one option is to buy companies where a buyout has been announced but not yet completed. That is where a case can be made for PNM Resources (PNM) and other such companies.

Between the time a buyout / merger is announced and the transaction is completed, stocks like PNM stop acting like other stocks and take on the characteristics of a bond.

PNM stock as a stock

As a utility stock, PNM Resources is a middle-of-the-road performer. Prior to the merger announcement, PNM stock was trading in the $40 – $45 range with an annual dividend of $1.23. Satisfactory, but hardly exciting.

As a stock, prior to the merger announcement, PNM had been underperforming the sector as measured by XLU.

The company’s revenue had been growing slowly over the past years, and its operating income had deteriorated over the previous two years.

Interest expense was elevated, and its per share dividend payout ratio was around 100% of its earnings per share. Even with the high percentage payout ratio, the company has maintained more than adequate liquidity. 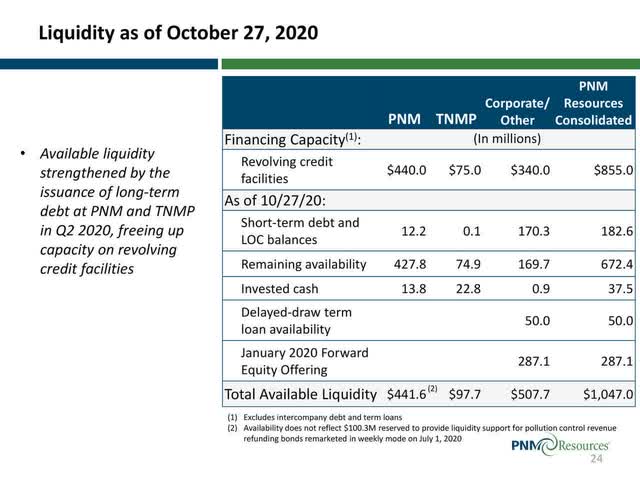 In those circumstances, despite serving potentially lucrative electricity markets in New Mexico and Texas, it was hard to get excited about the stock.

But, if you stop thinking about PNM as a stock, but rather as a bond, then the story grows much more interesting.

Investors who owned PNM stock prior to the merger announcement have done very well. For others, like myself, buying the stock at its current level gives me the equivalent of a very good bond yield for the length of the transaction until the acquisition is completed.

As sometimes happens when mergers are announced, the quick jump in PNM’s stock price has since seen a slow drop as investors take their profits and move on to other more potentially lucrative stock purchases. 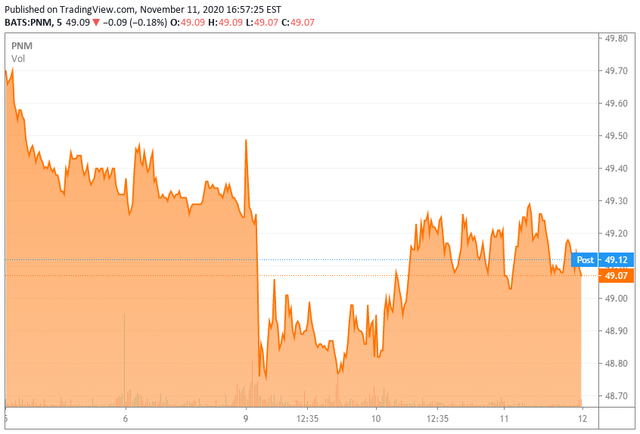 In addition, PNM will continue to make quarterly dividend payments of at least $0.3075 every three months until the merger has been approved by all the regulatory bodies and can be finalized, most likely sometime before the end of 2021. 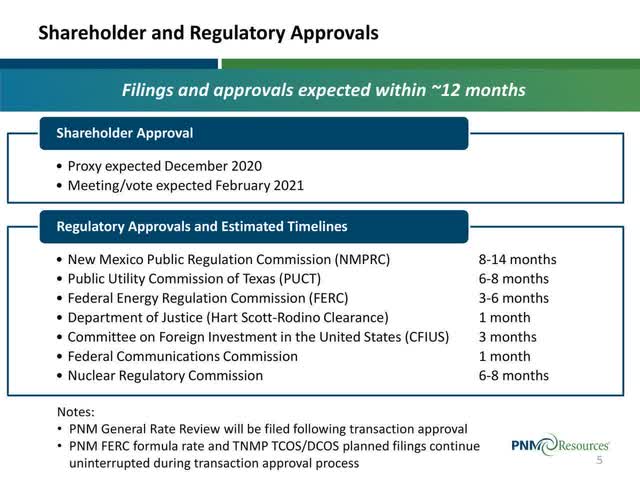 For a bond investor, looking for yield, that payment is better than the current yield on a two-year corporate bond rated Baa/BBB, with the current median yield of around bonds with a credit ration of Baa/BBB at 0.54%. (Source: Fidelity.com, as of November 10, 2020)

Why the math works

The situation with PNM is particularly attractive because:

In merger/acquisition situations, there are always risks. The buyer can re-negotiate a lower price for the stock if the economic situation deteriorates, the necessary approvals may take longer than anticipated, or the buyer can back out of the deal before it is consummated.

Tiffany & Company (TIF) is an example of the first risk. As the economy took a downturn related to Coronavirus shutdowns, the acquirer (Moët Hennessy Louis Vuitton (LVMH)) threatened to back out of the deal and went to court. To end the lawsuits, Tiffany agreed to accept a reduced buyout amount, down from the original offer of $135 per share to $131.50, a drop of 2.6%.

Regarding the risk that the merger may fail, back in April, Boeing terminated its Master Transaction Agreement (MTA) with Embraer ending a potential $4.2 billion deal.

“Over the past several months, we had productive but ultimately unsuccessful negotiations about unsatisfied [Master Transaction Agreement] conditions. We all aimed to resolve those by the initial termination date, but it didn’t happen,” Marc Allen, Boeing’s president of Embraer partnership and group operations, said in a news release.

There is no reason to believe that either of these situations will occur with the Avangrid / PNM merger. Avangrid’s major shareholder is Iberdrola (OTCPK:IBDSF), and Avangrid has announced that:

AVANGRID’s majority shareholder, Iberdrola, has provided the company with a funding commitment letter for the entire equity proceeds for the transaction.

Of course, if the merger did fail, then current shareholders would still have a viable company although PNM’s share price would probably drop back to its pre-announcement levels.

While the twelve-month window for regulatory approvals is estimated, there is a possibility that shareholders may not see their final payout on the stock until 2022, if regulators take more time to review the transaction.

Finally, a reminder while no one contemplates that PNM Resources would go bankrupt before the merger, buying a stock gives you less protection in the case of bankruptcy than if you had a bond from the same company. Offsetting part of this risk is the fact that many bonds have fewer covenants to protect bondholders in the case of a default, so more bondholders find their risks similar to shareholders if a company declares bankruptcy.

Or as the headline in InvestmentNews says:

While there is always a possibility that this merger will fail, the chances are minimal, but they deserve to be considered as risks to any agreement until the merger is completed.

For the funds I set aside for stock purchases, I continue to look for opportunities for capital appreciation, but for the fixed income portion of my investments, PNM stock at its present level is also an opportunity.

With a merger process taking a year or more, most likely there will be fluctuations in PNM’s stock price with a resulting yield better or worse than at present, so investors interested in a bond-like instrument should pay attention to the stock price and act when an opportunity appears.

Shareholders in PNM Resources prior to the October 21 merger announcement have done well as their stock jumped at the news, but those of us interested in a bond-like return in the fixed income portion of our investment portfolio can still benefit from the stock at present levels.

Note: I am an individual investor, not a financial advisor. I enjoy the sometimes-lucrative activities associated with stocks and bonds. Individuals should make up their own minds as to the desirability of any given investment based on their own financial situation.

Disclosure: I am/we are long PNM. I wrote this article myself, and it expresses my own opinions. I am not receiving compensation for it (other than from Seeking Alpha). I have no business relationship with any company whose stock is mentioned in this article.

Additional disclosure: I did not purchase PNM Resources until after the merger announcement on October 21, 2020.