The big thing we want to know is whether the stimulus that has already been done is enough. Have we reached a self sustaining lift off in terms of economic recovery? If not then more stimulus is economically necessary – leave the politics aside – and if so then we don’t have to worry about whether there will be more stimulus or not.

My long term take has been that what was done was enough and that more isn’t needed. Fortunately for my prejudices the economic statistics are agreeing with me.

This is all before we consider what might happen next in terms of infection rates and further closedowns of course. Even then we’ve learnt a lot about how to deal with such necessary social distancing. Damage now will be near entirely limited to those sectors absolutely affected – bars, restaurants, theatres and so on. All vital parts of life but still a small part of the overall economy. We’ll not need to be closing down industrial production this time around and so on.

One of our leading indicators is the purchasing managers indices. These come in two flavours, services and manufacturing, from two different sources. More than 50 is expansionary, less is contractionary. It’s important to note that a fall to a number still above 50 means that the speed of growth is slowing, not that growth itself is reversing.

The Institute of Supply Management does one set of PMIs, this is their manufacturing one:

The October Manufacturing PMI® registered 59.3 percent, up 3.9 percentage points from the September reading of 55.4 percent and the highest since September 2018 (59.3 percent). This figure indicates expansion in the overall economy for the sixth month in a row after a contraction in April,

The first few months of that we already know, April was the nadir, we’ve had growth over the summer. The second part we weren’t sure about. Was the growth continuing into October? Our answer really has to be yes: 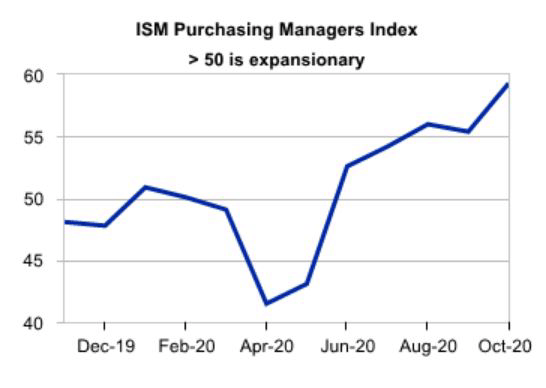 ISM also does a services PMI, as well they should given that services are about 8 times the size, as a portion of the economy, than manufacturing:

“The Services PMI™ registered 56.6 percent, 1.2 percentage points lower than the September reading of 57.8 percent. This reading represents a fifth straight month of growth for the services sector, which has expanded for all but two of the last 129 months. 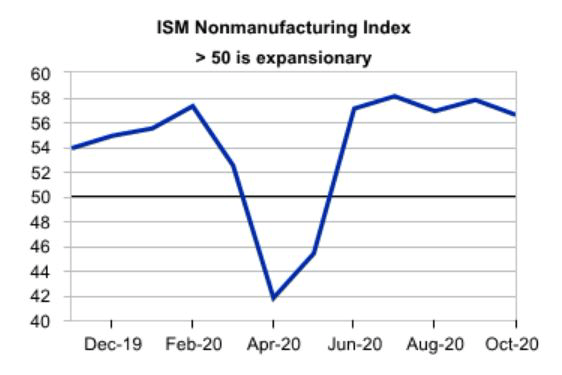 As we can see the speed of the services expansion is slowing but it’s still highly expansionary.

We also have the other set of PMIs, from IHS Markit. Their manufacturing:

The seasonally adjusted IHS Markit final U.S. Manufacturing Purchasing Managers’ Index™ (PMI™) posted 53.4 at the start of the fourth quarter, up slightly from 53.2 in September and broadly in line with the earlier released ‘flash’ estimate of 53.3. The latest improvement in operating conditions was solid overall and the fastest since January 2019, marking a further move away from April’s nadir.

They’re not reading the manufacturing expansion as being as fast as ISM are but it’s still happening. 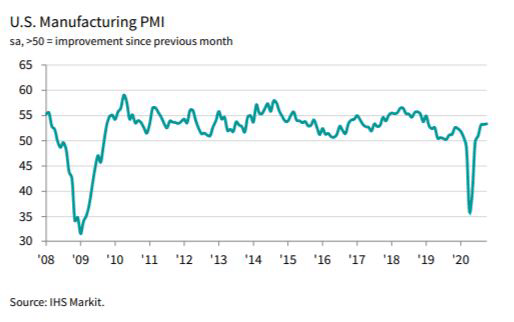 We also have the services flavour of the IHS Markit PMI:

The seasonally adjusted final IHS Markit US Services PMI Business Activity Index registered 56.9 in October, up from 54.6 in September and higher than the earlier released ‘flash’ estimate of 56.0. The improvement indicated that the rate of growth regained momentum at the start of the fourth quarter to the sharpest since April 2015. Greater output was often attributed to stronger demand conditions and a further uptick in new business. 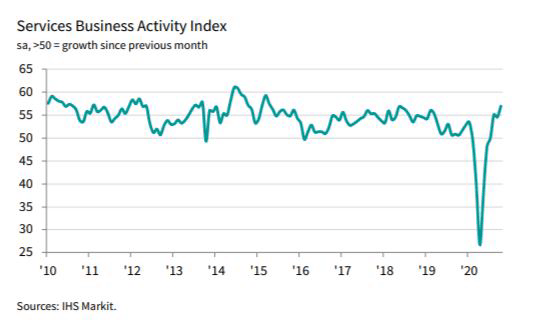 Stimulus largely stopped in August if not before. So, given that these are numbers collected in mid-October, and are forward looking (they are of views in mid-October but by design are about what is about to happen) we do have pretty good evidence that stimulus managed to do what it was meant to do. Sure, alleviating hardship is nice but that’s not the point. Rather, we want to build both consumer and business confidence so that the entire economy doesn’t retreat into its shell.

The bounce back, V shaped recovery, continuing beyond the end of stimulus is useful evidence that this has worked.

As I’ve long been saying I thought we would gain that V shaped recovery. We largely did as the Q3 GDP report showed. This recovery seems to be continuing on into October. Good.

What matters to us as investors is of course what happens next. We’re not out of the woods unfortunately. There is the possibility of further lockdowns, as is happening in Europe. There is always politics – unknown at the time of writing – which can cause near anything to happen.

What we do know though is that the past is dealt with. That near collapse of the economy into another depression as a result of the first lockdown has been dealt with. We only have to worry about future events that is, not past.

So, as investors our worries become twofold. In macroeconomic terms, what is going to happen next? While w wait for that we’re back to microeconomic investment decisions, which stock, which special situation, not the market as a whole.