Welcome to Orchid’s Weekly report, in which we discuss the positioning in the platinum markets across different trader categories (e.g., speculators, commercials, ETF investors), the fundamentals, and the implications for platinum prices through the lens of the GraniteShares Platinum Trust (PLTM).

While the long positioning in the platinum market has contracted slightly of late, it is still close to a record high.

Given the lack of fundamental support (we see a strong surplus this year due to the contraction in automotive demand) and the negative seasonality of platinum prices, PTLM could be vulnerable to further selling pressure in the near term.

Against this, we maintain a trading range forecast of $7.70-$10.00/share over the next three months. 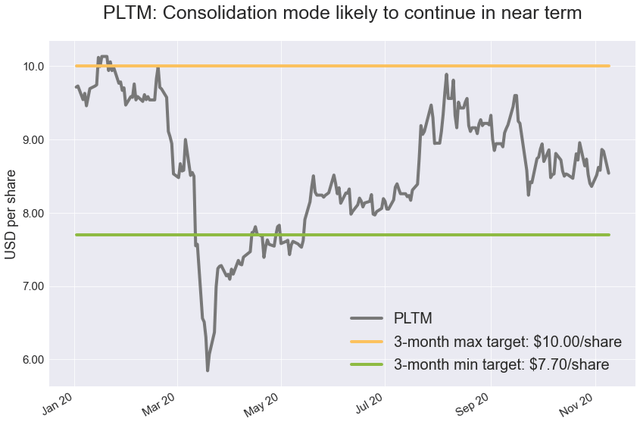 PLTM, which was created in January 2018, is directly impacted by the fluctuations of platinum spot prices because the Fund physically holds platinum bars in a London vault and custodied by ICBC Standard Bank.

The investment objective of the GraniteShares Platinum Trust is to replicate the performance of the price of platinum, less trust expenses (0.50%), according to the official Graniteshares’ website.

The physically-backed methodology prevents investors from getting hurt by the contango structure of the platinum market, contrary to ETFs using futures contracts.

Also, the structure of a grantor trust protects investors since trustees cannot lend the platinum bars.

PLTM is the lowest-cost ETF on the market, with an expense ratio of 0.50%. PLTM competes with the Aberdeen Standard Physical Platinum Shares ETF (PPLT), which was created in October 2010, which is however more expensive considering that its expense ratio is at 0.60%. 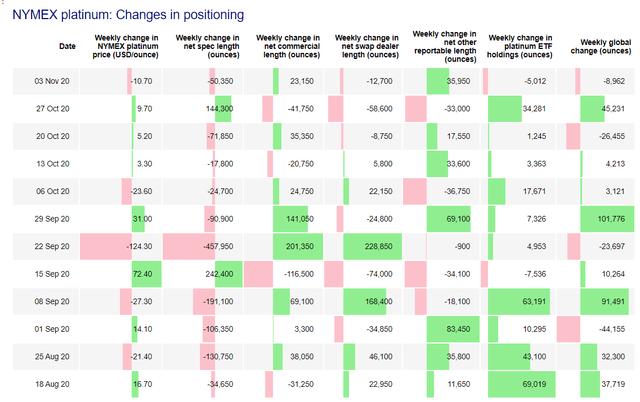 In the week to November 3, the net long positioning in the platinum market dropped slightly by 9,000 ounces. This was essentially the result of speculative selling (~50 koz), which was partly offset by an increase from other reportable traders (~36 koz). Meanwhile, ETF investors cut their holdings by a small 5,000 ounces. Over the same period, the NYMEX platinum price dropped by 10.7 USD/ounce for the first time in four weeks. 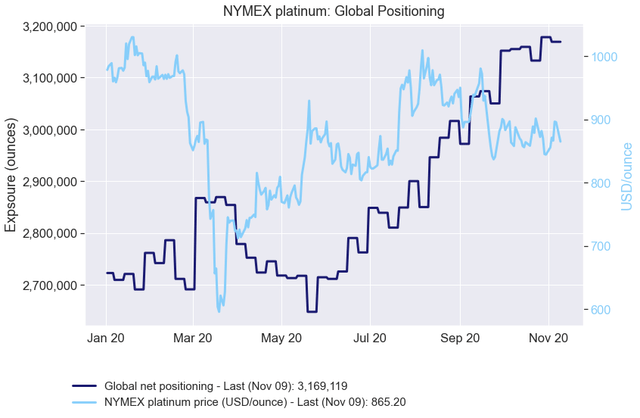 Like most other precious metals, the positioning in the platinum market is heavily long, which has been the result of substantial ETF inflows since 2019. Platinum ETF holdings, last at 3.442 million ounces according to our estimates, are at an all-time high. 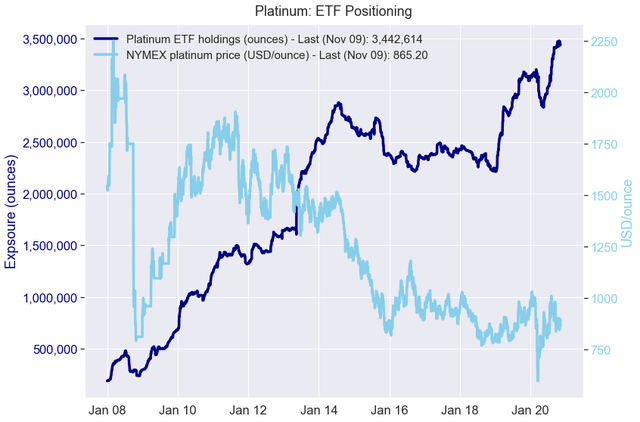 Against this, there is a risk of unwinding of this long positioning, especially if a negative macro event were to occur. At the start of the week, news on a potential COVID-19 vaccine seems to have triggered a monetization of safe-haven assets like gold. Given the non-negligible co-movement of gold and platinum, platinum prices have come under pressure.

Platinum is particularly vulnerable considering its weak fundamental picture. Although mine production has been severely disrupted this year due to the COVID-19 crisis, automotive demand has been hit even more, especially given the structural shift in consumer preference underway.

As SFA analysts reported in their recent note:

Registrations of electrified vehicles overtook those for diesels for the first time in European history in September, as BEVs, PHEVs and HEVs made up one in four of new cars registered (source: JATO).

On balance, the pandemic has resulted in a large surplus in the platinum market this year, which is naturally negative for platinum prices, all else equal.

Although we are not necessarily bearish on PLTM, we prefer to stay away from the platinum market for the time being. The heavy long positioning (vulnerable to unwind) and the lack of fundamental support makes platinum prices vulnerable to the downside. This is especially true considering the negative seasonality of platinum prices in November.