Pinterest (NYSE:PINS) was one of our big bullish calls back at the virus lows in April. The stock is now up 200% from this call near the lows and nearly double the pre-virus levels, so now is an odd time to plug Pinterest. The social media space saw a big boost in usage during the economic shutdown, but investors should worry about some tough comps next year.

Repeating Q2 Will Be Tough

Anybody reviewing the Q2 user data for Pinterest will see that the social media stock probably won’t repeat the growth in future quarters. The company had seen several quarters of declining sequential MAU growth prior to this ramp.

In Q3, Pinterest saw user growth surge to 39%, up from only 26% in the prior quarter. In the December quarter, the company only saw 13 million new MAUs from the prior quarter. After a quarter with sequential growth of 49 million MAUs, the risk next year is a period of relatively flat to negative growth. 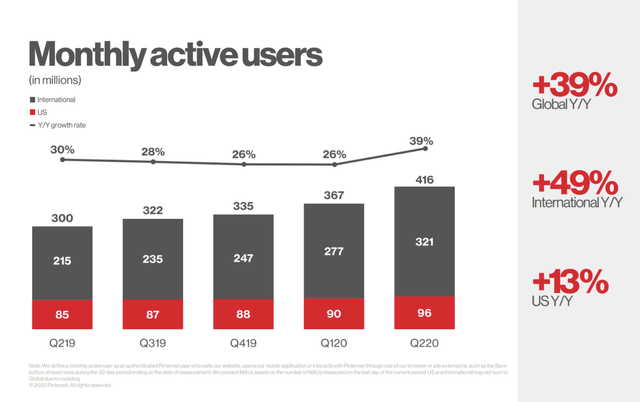 The company has become a preferred social media play due to the lack of issues with political and hate speech. Pinners use the site to find items from recipes to clothing items, not to engage with other users on political matters. The lack of turmoil on the site makes Pinterest less visited than say Facebook (NASDAQ:FB) or Snapchat, but each user and search has far more value to advertisers. At the end of the day, quality could very possibly top quantity.

READ ALSO  Macro-financial crises: Impeding the rush for the exit

The social media site just won’t repeat the user growth of the last quarter into next year, especially how U.S. Q4 growth was only 1 million MAUs. Pinterest will definitely boost revenues with the extra users and the rebound in advertising expected in Q3 and heading into 2021.

The company was growing at a 35% clip in Q1, and analysts see 30% revenue growth sustainable in 2021 as the ad market normalizes after a pause during the crisis. No doubt, Pinterest has tons of upside with ARPU, considering the average global user only generates $0.70 per quarter. The company only needs to reach $2.10 per MAU in order to triple revenues before even accounting for increasing users. Just a return to the $0.88 ARPU from last Q2 would push revenues on the 416 million MAUs to $366 million, up from the $272 million reported last quarter.

As Pinterest has marched higher following the pandemic lows, the market has only gotten more bullish on the concept. Pinterest has gone from the least appealing stock in the social media space to now trade on par with the valuation of Snap (SNAP) at a forward EV/S multiple of ~12x. The stock is approaching levels of nearly double the multiples of Facebook and Twitter (TWTR).

Even the analyst community is rather bullish on Pinterest having only become more bullish as the stock has risen. Though, the irony is that the average analyst only has a price target of $38.10 with the stock closing at $6.43 above this target to start October.

Despite this odd scenario, Pinterest has 13 Bullish analysts and only 2 Bearish ones. Sure, 13 analysts are Neutral on the stock, but the average analyst should be Bearish with a stock trading at a pricey multiple and trading above most analyst price targets.

On top of these Wall St. ratings, apparently, TMF was positive on the stock and pushed up Pinterest to all-time highs. The social media site clearly has plenty of opportunity in boosting ARPU and teaming up on e-commerce with top platforms, but the stock was a Buy when trading below $30 for over a year prior to this rally.

With a new high here, Pinterest likely rallies on to $50 or $60, but one needs to realize that the market cap reaches an insane $28 billion at $60. Analysts only have the company generating up to $2 billion in 2021 revenues, placing the stock at 14x those revenue targets.

Unfortunately, the tough comps next year will cause the stock to lose momentum. The market will suddenly question the logic used to push the stock up to all-time highs here as ARPU growth was always part of the story, but the concept didn’t keep the stock from collapsing earlier this year.

The key investor takeaway is that Pinterest is likely to continue this rally to new highs beyond $50 and up to $60. Investors should look to unload shares at these levels due to valuation issues and the likelihood of tough comps in 2021.

If you’d like to learn more about how to best position yourself in under valued stocks mispriced by the market, consider joining Out Fox The Street.

READ ALSO  It's A Bird, It's A Plane - It's A 5% Undervalued Lockheed Martin (NYSE:LMT)

Disclosure: I am/we are long TWTR. I wrote this article myself, and it expresses my own opinions. I am not receiving compensation for it (other than from Seeking Alpha). I have no business relationship with any company whose stock is mentioned in this article.