PIMCO recently released their July distribution coverage figures, creating a lot of consternation in the income investor community. In this article, we discuss some of the surprises of the release, particularly in the taxable space. We continue to maintain an allocation to the High Income Fund (PHK) in our High Income Portfolio due to the fund’s low fee, attractive premium valuation, and modest leverage.

First, let’s get the good bits out of the way. All muni funds increased their 6-month rolling coverage, extending the trajectory of stronger coverage since the April lows, driven by a combination of deleveraging and a spike in short-term municipal borrowing costs. The actual individual coverage trajectories of the funds vary substantially – some funds are still below their coverage peaks while others have exceeded them. One thing all the PIMCO muni CEFs share is that they are all running at lower borrowings than prior to the drawdown. This will tend to lower earnings and coverage, all else equal. However, this has been offset by the sharp drop in leverage costs across both tender option bonds as well as ARPS held by the funds. 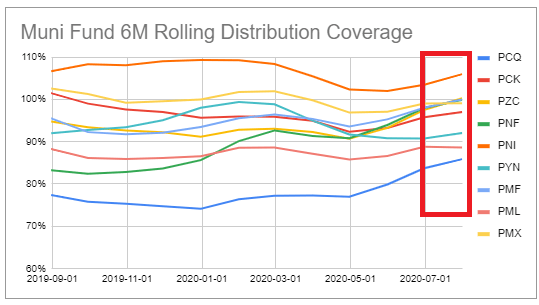 This trajectory is consistent across the broader municipal sectors, at least for those funds that disclose monthly coverage, which have seen a steady increase in coverage. 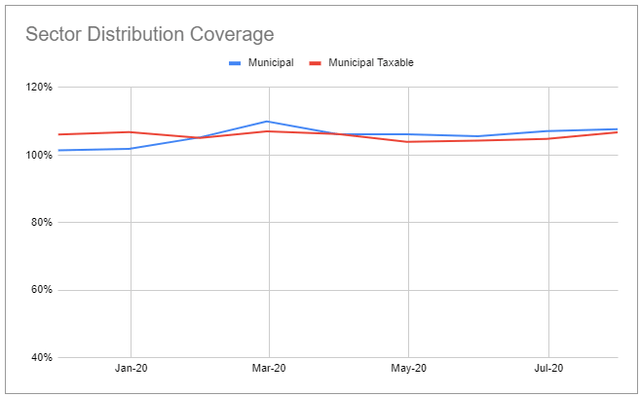 This trend actually understates the strong earnings growth in the sector due to continued distribution rises. The sector has seen the largest number of distribution increases even when adjusted for size as the chart below shows. 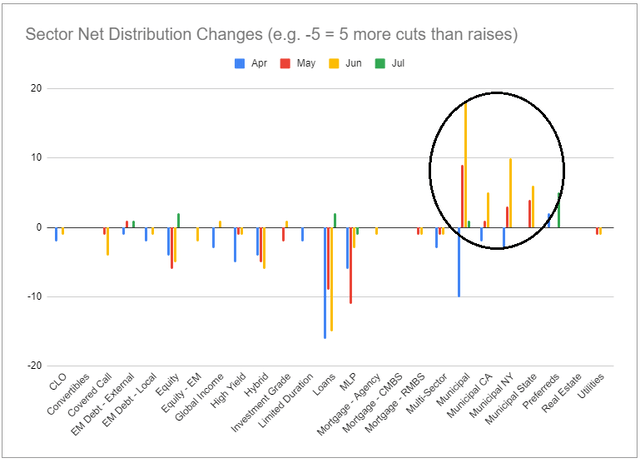 Let’s turn to the taxable funds. July had a big surprise for fiscal year-to-date distribution coverage for these three funds.

The surprise was the distribution coverage for these funds was zero. The announcement likely drove the price action of these funds in a kind of “sell now and ask questions later” dynamic. The chart below, which shows fund returns since the announcements, corresponds fairly well to the announced coverage levels. In particular, the outperformers Corporate & Income Opportunity Fund (PTY) and High Income Fund saw improved coverage, while the underperformers PKO, PCI, and Dynamic Income Fund (PDI) saw reduced coverage. 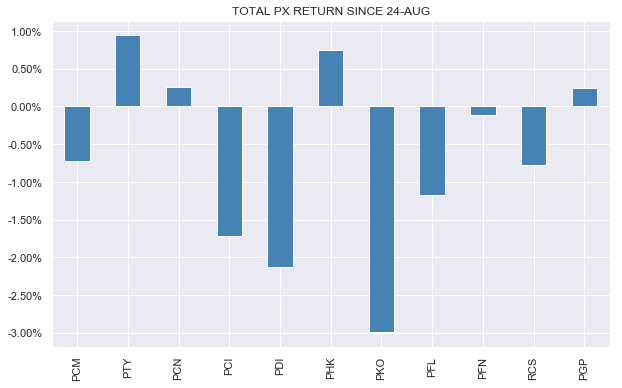 So, what is going on here? The first thing to mention is that the fiscal year of these funds started in July. This means that we don’t have the averaging of a number of months – all we have is earnings from the first month of the fiscal year.

One thing we like to point out is that the kinds of securities held by fixed income funds tend to make payments on a quarterly or semi-annual rather than monthly basis. This means that there will always be variation in earnings month to month, so investors should never rely on a monthly snapshot to give them an exact view of a given fund’s coverage.

However, the zero July earnings of these funds go beyond this kind of normal variation. To see how odd it is, consider the following chart which plots the monthly EPS of these funds over this year prior to July. There was an odd month in October of last year where earnings for some funds were negative. A negative number is generally not implausible, given the variation in cash flows and the fact that the funds have a number of costs that accrue each month. What is implausible, however, is a figure of exactly zero. 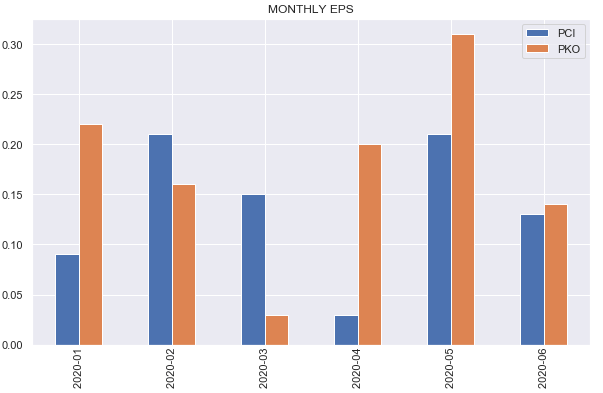 This result is particularly strange since we know that all three of these funds added borrowings (and presumably assets) to their portfolios in both June and July. So, if anything, their recent earnings should be moving higher, particularly as leverage costs remain at rock-bottom levels. 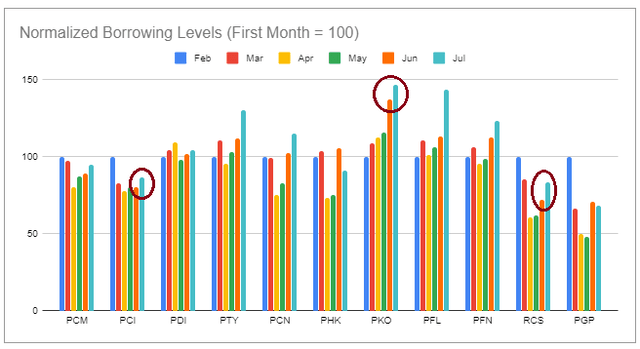 We saw a similar dynamic with the Income Strategy Fund II (PFN) last year where the fund pushed income into the valuation of their interest rate swaps, a process we described in more detail here. Are these funds doing the same thing here? Maybe! We just don’t know with the information we have available, but it’s our best guess.

To quickly sum up the rest of the action – the three RMBS-overweight funds saw a continuation of their respective trends over the last few months. 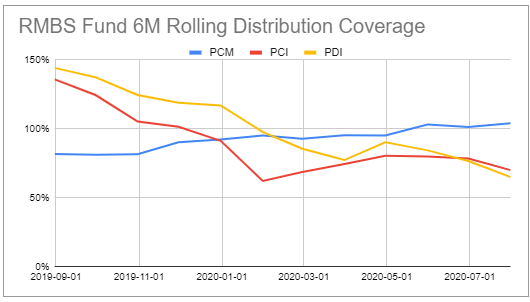 The rest of the multi-sector credit space mostly saw increases in coverage. Five funds with the fiscal year ending in July saw an increase in coverage, while PKO whose fiscal year ends in June saw a sharp drop due to a zero EPS month just discussed. 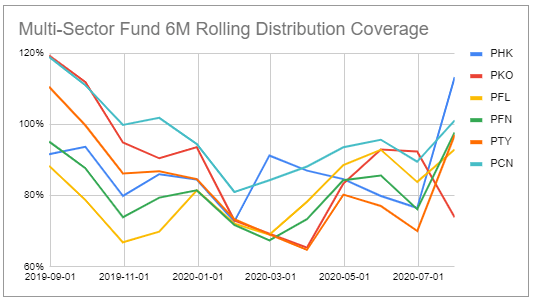 What does this mean for investors?

In our view, tracking PIMCO distribution coverage, while huge fun, is a distraction for taxable funds. To illustrate this, consider the following chart which plots 6-month rolling coverage for the multi-sector taxable fund PKO and the PIMCO Municipal Income Fund II (PML). PKO has enormous variability in its coverage, while the muni fund is much more stable. 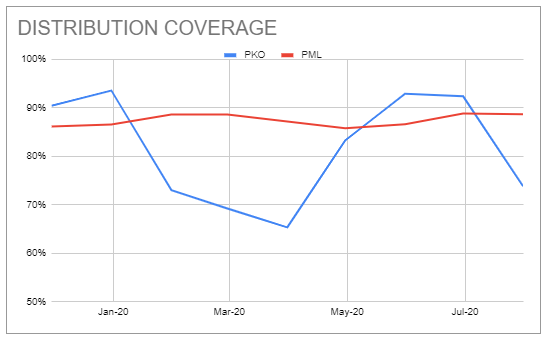 One way to approach the taxable PIMCO funds is by thinking of them across similar groups – illustrated in the following sector allocation chart. 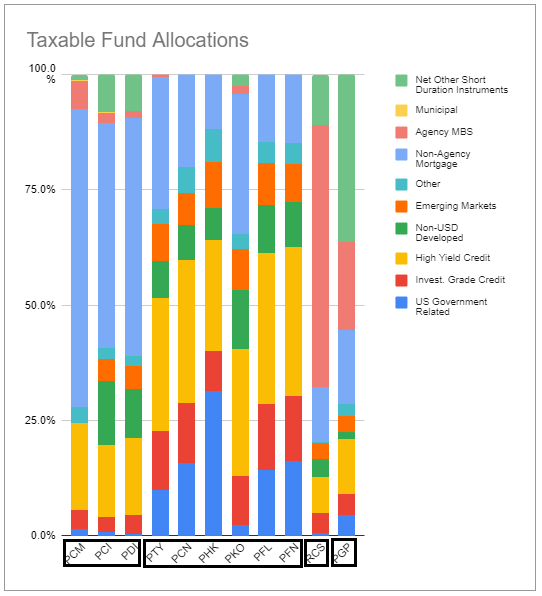 It would be too far of a stretch to say that these funds hold more or less the same portfolio, but it’s not a million miles from the truth. Yes, the funds across a given group can have different levels of leverage, and the individual sector allocation can be somewhat different, but broadly speaking, they are not miles apart. The large Government bucket for the High Income Fund, which makes it stand out, is actually a swaps allocation which doesn’t drive the fund’s earnings or returns anywhere near the size its sector allocation would suggest.

Once the funds are split into these buckets, investors can focus on relative value across the buckets. Discount valuations will tend to move around, driven by investors’ concerns about distributions and coverage which will open up opportunities. For example, after its distribution cut earlier in the year, there was a real sense of despair about PHK which allowed it to trade at an attractive valuation. In our last PIMCO article, we made a rotation from PKO to PHK for a number of reasons. So far, the market is agreeing with this view as PHK has outperformed in total price terms since then. 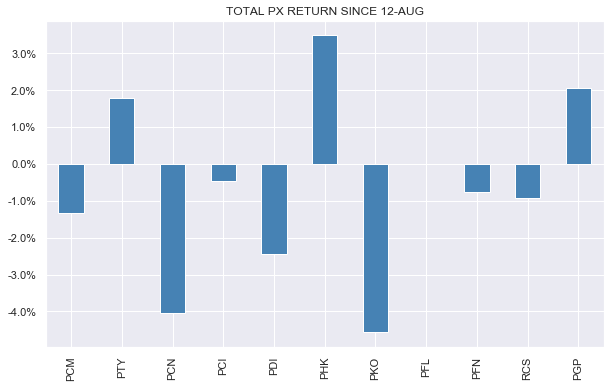 No doubt these kinds of sentiment shifts will continue across the PIMCO funds, opening up further opportunities for investors to rotate within the space.

The variation in coverage levels across PIMCO taxable funds is wild enough to drive even the most calm investors mad. Given the frequent whipsaws, investors may be better off “looking through” some of the variation in earnings and base their investment decisions on things that they can hang their hat onto, so to speak, such as leverage levels, fund fees, discount valuations, leverage costs and sub-sector allocation. Among the taxable PIMCO funds, we continue to like PHK for its low fees, attractive premium valuation, and modest leverage, and maintain the fund in our High Income Portfolio.

Check out Systematic Income and explore our Income Portfolios, engineered with both yield and risk management considerations.

Read our Investor Guides: to CEFs, Preferreds and PIMCO CEFs.

Check us out on a no-risk basis – sign up for a 2-week free trial!

Disclosure: I am/we are long PHK. I wrote this article myself, and it expresses my own opinions. I am not receiving compensation for it (other than from Seeking Alpha). I have no business relationship with any company whose stock is mentioned in this article.